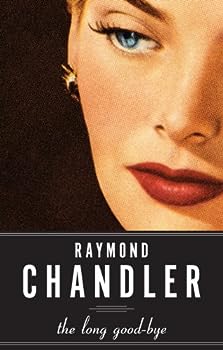 (Book #6 in the Philip Marlowe Series)

Published by Thriftbooks.com User , 13 years ago
You don't read Raymond Chandler for the plots--you read him for the magnificent "hard boiled" prose. The Long Goodbye is probably his most complex work, full of world-weary insights and a somewhat more "tender" Marlowe. The great pleasure of The Long Goodbye is seeing how the main character, Philip Marlowe, reconciles his cynical view of humanity with a genuine desire to help a few unfortunates in life. The best Marlowe... classic.... Donald Gallinger is the author of The Master Planets

"Down these mean streets a man must go..,"

Published by Thriftbooks.com User , 13 years ago
This book, the penultimate novel in noir pioneer Raymond Chandler's series of novels featuring private eye Philip Marlowe, is my candidate for the best American novel of the post world war 2 era. From the time he launched the Marlowe novels with the epochal The Big Sleep in 1939, it was crystal clear that Chandler viewed the detective novel as a vessel to be filled with pungent social commentary, an almost metaphysical portrait of a world gone wrong (call it Los Angeles), sharp character studies, and a fireworks display of the literary possibilities of the American vernacular. Chandler used the bits and pieces of the private eye/noir conventions as a coatrack to hang his stylistic concerns and dark worldview. He has more in common with Fitzgerald, Hemingway, and Faulkner than he does with contemporaries like Hammett and Cain. (and very often he is the equal of Max Perkins' big boys). Chandler recycled the same story elements over and over again, knowing plot has nothing to do with story. All of his novels go something like this: Marlowe gets hired to help someone out of a jam, closes the case pretty quickly, but the solution has raised more questions than answered. Marlowe pursues the truth on his own, realizes his client has been concealing a past crime from him and he had initially been hired to tidy up the loose ends. Along the way he narrowly escapes seduction by a dark lady and a fair lady, is arrested and threatened by the cops, beaten up by hoods, and goes nose to nose with a fearsome but super-smart crime boss, who invariably is less corrupt than the wealthy clients or the police. At the end Marlowe solves the latent mystery behind the first one, and closure only leaves a bitter taste in his mouth. Only once did Marlowe ever kill anybody, and only once (prior to the last novel Playback, where he's yikes, engaged) does he sleep with anybody. Marlowe himself, who narrates the books, is quite a construct. He charges 25.00 a day plus expenses, and he doesn't do divorce work. He lives alone in a shabby Hollywood rental bungalow, drinks too much, plays the tough lout but reads Flaubert secretly, plays solitary chess as a hobby. He seems to prefer to take a beating than hand one out. He hates the rich, has contempt for the cops, and loathes bullies of all stripes. He is a magnet for women, but lovemaking to him seems largely to consist of elaborate verbal dueling/repartee. His celibacy seems a choice, a means of retaining purity and honor in a corrupt world, but a choice that he is aware is pathological and self-defeating. When Chandler wrote The Long Goodbye in the early '50's, the private eye genre had already been frozen into nostalgic cliche. The violent nihilism of Mickey Spillane had supplanted Chandler's knightly quester. Chandler perhaps felt free to expand his pallet -- while the outline of the plot follows all the conventions the earlier books did, here the length is doubled, the pace slowed down, the genre elements give way to ri

Vintage Chandler... his longest, and one of his best...

Published by Thriftbooks.com User , 21 years ago
Every time I finish reading one of Chandler's Marlowe novels, I end up feeling depressed, because it's one less Chandler novel that I can read for the first time. In my mind, he's that good -- he is one of the only writers that I am consistenly incapable of setting down to go to sleep... I finished the last half of "The Long Goodbye" at about 5:00 am -- I was so wrapped up in it, that I failed to notice the time. Alas. Now, as for that review...IF YOU HAVEN'T READ ANY CHANDLER, you should stop reading this and go take a look at his first Marlowe novel, The Big Sleep. It's worthwhile to read them in order, or at the least, to read that one first... you'll get a good feeling for whether or not you like Marlowe, and you'll learn a bit more about him. Then, if you like that, come back and take another look at this review.IF YOU HAVE READ OTHER CHANDLER, then you already know, to some degree, what you're in for. You know Chandler's style, and I can promise you that this book offers up more of it, in abundance. I was a little thrown off for the first 50-some pages, because Marlowe has moved out of his trademark apartment and into a small house in a quiet residential neighborhood, and that didn't jive with me... but it works. Marlowe is, in his way, maturing. (If you've read his unfinished final work, Poodle Springs, then you know Marlowe will eventually get married. Perhaps this evolution says as much about Chandler as about his beloved P.I.)Once the plot starts moving, of course, you're just along for the ride. Like all Marlowe novels, you have that perfect feeling of riding shotgun in the mind and conscience of a fascinating and well-developed character, and it's enough to sustain you through WHATEVER Chandler cares to write about. But, as I said, this is Vintage (no pun intended) Chandler -- some of his best work. Like several other books of his, I would give it more than 5 stars if I could, because nothing he wrote deserves less. The plot develops in three acts, which seem unrelated until he begins to pull them together, and when he does so, it is nothing less than amazing to behold. (I thought I was outguessing him, and knew what was going to happen. Stupid me -- he was still three steps ahead of me, and I had egg all over my face when I was done with the last page. I love him for that.)If you're a mystery fan, or even a fan of good stylistic writing, this is some of the best stuff you could hope for. Call it pulp if you like, and say that Hammett outsold him if you must, but for my money, Chandler had more style than anyone else who's ever tackled the genre. Marlowe remains one of the best, most complete, and most enjoyable creations of literature that I have ever found, and I only wish that Chandler had left us more of him. *sigh*BOTTOM LINE: If you haven't read this one yet, I envy you. It's a hell of a ride, and it's got plenty of re-read value. Worth owning, and a must for Chandler

Published by Thriftbooks.com User , 22 years ago
This epic Raymond Chandler novel is his most finely crafted and perhaps the best ever of its genre. Featuring Chandler's world-weary private detective, it mixes an intriguing plot with fascinating social comment. The plot concerns Marlowe's dealings with a drunk named Terry Lennox and his role in an escape from a murder charge to Mexico. Most of the novel, however is taken up in the rich suburbs of L.A. It has everything that all the best Chandler/Marlowe books have, clever, poetic, often humourous dialogue, cynicism, characters who seem tired of life and yet so full of it, and the sun-drenched L.A. setting. Those used to the more pacy narrative writings such as 'The Big Sleep' and 'The Lady in the Lake' may be a tad cool on this book as it spends as much time dissecting the lives of its downtrodden characters as it does unfold the plot. The later film version, brilliant though it is, does not even do this book justice. EVERYONE SHOULD READ THIS BOOK!!

Best book ever? I really think so.

Published by Thriftbooks.com User , 23 years ago
I first read "The Long Goodbye" in 1976, before I had read any other Raymond Chandler novels. The book practically set off an explosion in my brain -- I have been fascinated by Chandler ever since. No other book by Chandler matches this one's emotional tone. This isn't a mystery novel, it is a great piece of literature. It is about friendship, love and betrayal. And the plot is complex and satisfying. Marlowe is defeated and in pain, and very, very alone. I have read "Goodbye" three times since 1977 -- most recently last year -- and every time I am just amazed at the effect the book has on me. It possibly just touches me personally, but I really believe it deserves a rating among the great books of all time.
Copyright © 2020 Thriftbooks.com Terms of Use | Privacy Policy | Do Not Sell My Personal Information | Accessibility Statement
ThriftBooks® and the ThriftBooks® logo are registered trademarks of Thrift Books Global, LLC