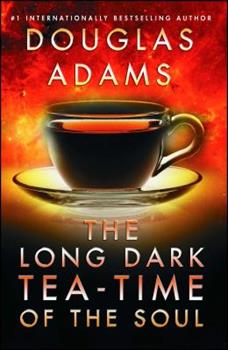 The Long Dark Tea-Time of the Soul

(Book #2 in the Dirk Gently Series)

Beloved, bumbling Detective Dirk Gently returns in this standalone novel in trade paperback for the first time from Douglas Adams, the legendary author of one of the most beloved science fiction novels of all time, The Hitchhiker s Guide to the Galaxy . When a check-in desk at London s Heathrow Airport disappears in a ball of orange flame, the event is said to be an act of God. But which god? wonders holistic detective Dirk Gently. And how is this...

Published by Thriftbooks.com User , 17 years ago
I just wanted to add (to all of the other reviews) that, while the Dirk Gently books may not be as hilarious as the Hitchhiker's book (and at times verge toward drama), I would say they are much more interesting. The plots are complicated to be sure, at times esoteric and puzzling, and you may even have to re-read, but I find it is well worth it. Fascinating.

Published by Thriftbooks.com User , 18 years ago
A check-in counter at London's Heathrow Airport spontaneously explodes in a ball of flame, and is ruled by the authorities as "an act of God." As it turns out, the explosion was an act of *a* god---Thor, the God Of Thunder, trying to catch a plane to Oslo, Norway. But why would an almighty god be trying to catch a plane flight in the first place? Enter holistic detective Dirk Gently to solve the mystery....The second and, sadly, final "Dirk Gently" book written by the late, great Douglas Adams, "The Long Dark Tea Time Of The Soul" is a hysterically funny book, and a major improvement over the decent but unspectacular first book, "Dirk Gently's Holistic Detective Agency," which certainly had it's funny moments, but was too long (and long-winded) and confusing. This time around, Adams' writing is a LOT sharper & funnier, and he keeps the book excellently paced. And the character of Dirk Gently really grows here---he's much more concise and focused, and he doesn't ramble on and on about his philosophical views & methods of detective work as he did in the first book. "Long Dark Tea Time" contains many outrageously funny scenes---Dirk's dilemma with his old refridgerator, and his surprising encounter with a young boy watching TV are both particularly memorable---and great characters, too, not only Dirk Gently but also the spunky American girl Kate Schechter, Thor the hot-headed God Of Thunder, and the vile creature named Toe Rag. The story is clever, moves along nicely, and, if I haven't made it clear enough, is very, very funny.I'm saddened that Douglas Adams never got around to writing a third "Dirk Gently" book, as I would've loved to have read further adventures of this most oddball of detectives. But at least Adams wrote a pair of them, and "The Long Dark Tea Time Of The Soul" is a fabulously hilarious book that can proudly sit right alongside Adams' very best "Hitchhiker's Guide To The Galaxy" books, in particular volumes 1, 2 and 4. "The Long Dark Tea Time Of The Soul" is classic Douglas Adams all the way.

Read it more than once!

Published by Thriftbooks.com User , 20 years ago
I have read all the volumes of THE HITCHHIKERS GUIDE. In fact, I've read all of DNA's books including his nonfiction such as THE DEEPER MEANING OF LIFF and LAST CHANCE TO SEE. Of all the books, THE LONG DARK TEA-TIME OF THE SOUL is by far my favorite. I must add, there is no piece of fiction that I have read as many times as THE LONG DARK TEA-TIME OF THE SOUL. Why would a person read this novel more that once? First, it is hilarious! The dialogs and interaction among the characters are well honed. This description of airports on the first couple of pages will induce everyone to continue reading. Second, the story and the underlying theoretical principles that guide the novel are quite complex. Thus, a person can read this novel ten times and still undercover an unanticipated wrinkle that sheds new light on the plot and subplots. Third, from an academic perspective, Dirk Gently employs an "ecological system model" as the centerpiece of his investigative tools. Gently's worldview represents an extreme form of a theory that student's commonly learn in college. Teaching the theoretical principles of the ecological system model is a stuffy and arduous enterprise. However, using Dirk Gently as an example opens the door for understanding among many college students. Back in 1991, I emailed DNA about how I was using his novel in class. He replied and was pleased with my efforts.I love this book and feel sad that I will not have the pleasure reading more of DNA's work.

Published by Thriftbooks.com User , 21 years ago
This book, and its predecessor "Dirk Gently's Holistic Detective Agency", are heavily under-rated due to the major success of the Hitch Hiker "trilogy" by Douglas Adams. But in a way, they're the better ones. Especially this one.I won't bother telling the story, because frankly I cannot. Now, I've been reading this book in about monthly intervals for years, but I still find something new each time, and I still have trouble keeping track of the story. Don't let that keep you, though. Yes, it *is* mildly confusing, but it all works out after a couple of times of reading, and it's great fun from first time, page one. Besides, it's worth the effort: there's many a topic for an evening of thinking in there.But that's not what you buy it for.Then there's the business of the Norse Gods walking the Earth, just like your average John Smith. Sort of. Thor naturally makes more of a nuisance of himself, but anyway, the notion of everything that the human race ever chose to believe in being true, and staying true long after we've ceased to need it to be true as well, is an astonishingly moving one. "Immortals was what you wanted, and immortals was what you got", complains one of them bitterly. And rightly so. What would you do if you were an immortal, omnipotent being whom no-one believes in anymore? Chances are, you'd sell your immortal soul to appear in a soft-drink commercial. Once you accept the fantasy part of it, it all snaps in place with logical precision, and even going to Asgard becomes an accepted way to spend the evening.But that's also not what you buy it for.The most outstandingly entertaining thing about the book is, of course, the humour, which is more like what you buy it for. Douglas Adams is an expert for making a pun in a couple of words and leave you laughing longer, and louder, than many other humourists could in an entire page. The incredible lightness of it all is only apparent if you ever tried to write humourous stuff yourself, and thus know how hard that is. No wonder that there are so precious few books from this author. And no wonder that many try to emulate him, and fail.Still, this isn't entirely comedy, and that's a good thing, too. Yes, the Hitch Hiker books give a couple of insights into Life, the Universe and Everything as well -- but the Gently books give more of it, and more practically applicable examples of it, even to those of you who know where their towels are. One of my favourite examples is the way that one of the (mortal) key characters, Kate Schechter, explains how her name is spelled: "Two E's, two C's, two H's, and also a T, an R and an S. Provided they're all there, the bank won't be fuzzy about the order they come in -- they never seem to know themselves." Okay, it's funny, but there's more to it than that: it's the kind of humour you can only really understand with a name like hers -- or mine --, which makes me wonder how someone with an instantly spellable name like Douglas Adams, of all

Published by Thriftbooks.com User , 25 years ago
Most people seem to prefer the more obvious slapstick of the early Hitchhiker's books, but I've found myself enjoying Adams more and more as he's matured. Many of the situations in this book are outrageous and silly, and there are plenty of the one-liners that are Adams' trademark ("It can hardly be a coincidence that no language on earth has ever produced the expression 'As pretty as an airport,'" the book begins) but there are very few passages intended solely for the purpose of eliciting a laugh. Everything's integral to the story, and it all makes sense in the end, although Adams doesn't hand you the answer on a silver platter. This novel is part social commentary, part Rubik's Cube (how DO those piecses fit together, anyway?), and part humor. It took me several re-readings to get the bit about the concentric circles on the eagle's wings, but it was worth it. If you enjoy exercising your mind through the contemplation of the absurd, you'll enjoy reading -- and re-reading -- "The Long Dark Tea-Time of the Soul."
Trustpilot
Copyright © 2022 Thriftbooks.com Terms of Use | Privacy Policy | Do Not Sell or Share My Personal Information | Accessibility Statement
ThriftBooks® and the ThriftBooks® logo are registered trademarks of Thrift Books Global, LLC