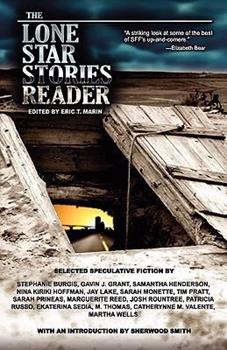 An immersive collection of fifteen fantastic and unexpected stories by new and established writing talents such as Nina Kiriki Hoffman, Jay Lake, Sarah Monette, Tim Pratt, Ekaterina Sedia, Catherynne M. Valente, and Martha Wells awaits you in this anthology of speculative fiction selected from the first twenty-five issues of Lone Star Stories webzine. Come walk along the outskirts of genre and experience the strange and wondrous tales of The Lone...

Published by Thriftbooks.com User , 12 years ago
The Lone Star Stories Reader collects some of the magazine's best pieces--fifteen stories which capture a wide range of styles and topics. "Seasonal Work," by Nina Kiriki Hoffman (my favorite in this collection) is a magical tale unveiling the secret works of a special gift-wrap clerk. Some stories take us back to a re-imagined Old West, most notably Martha Wells' subtle tale of werewolves, "Wolf Night," and Josh Rountree's thought-provoking circus story, "When the Rain Comes." Other stories are futuristic, such as Ekaterina Sedia's surprising tale, "The Disembowler." All in all, it's a well-rounded collection of stories, and everyone will find something they enjoy inside these covers.

Published by Thriftbooks.com User , 13 years ago
I bought the book because it had a Josh Rountree story. The compilation is excellent. I recommend it.

There is so much beauty here, densely packed yet woven like gossamer thread.

Published by Thriftbooks.com User , 13 years ago
// WARNING: gushing follows. If you've read any issue of the long-established webzine Lone Star Stories, you've seen it's not tied to Texas in any particular way (the introduction to this collection helps explain how that came about). If you've not yet read an issue of LSS, you're missing out. Having been familiar with LSS for a few years, now, and being an especial fan of the /printed/ word, I was thrilled to hear editor, slush-reader and fastest rejecter in the business Eric Marin was bringing out a collection. "The Lone Star Stories Reader" contains fifteen stories ranging considerably in length, for a grand total of two hundred sixty pages. These are all stories that originally appeared online at LSS between 2004 and 2008, all of which can still be read online. But for those of you who prefer your fiction in a tactile form, I heartily recommend this handsomely-presented book. With most collections, you expect a few clunkers--pieces that don't resonate with you as much as they might with someone else. I felt this anthology had been prepared with me in mind. The stories are inventive; some toy with you, some slap you around, some curl up next to you and purr sweet demands. My only complaint might be that the occasional denouement was more ethereal than I would have liked. Since they are all exquisitely written, here's some picks to give you a taste for the variety. "The Frozen One" by Tim Pratt might just blow your mind: a visitor from "someplace else. Sort of a kingdom next door" steps into our reality to tell a parable. "It's like, if you teach a kid to play chess, he doesn't just learn how to play chess, he learns how to think a certain way." They're training us--"there's some bad stuff happening there, way more complicated [...], but there might be some ... refugees." The parable's an engaging moral tale as well--I loved it, and I have a thing against moral tales. "The Disembowler" by Ekaterina Sedia is a beautifully inventive piece about a being running around disemboweling cars and appliances. I was skeptical a few paragraphs in, but everything was explained far better than I could have asked for, and the logic was consistent as well as surprising. "A Night in Electric Squidland" by Sarah Monette is a strange dystopian paranormal detective story set in the bowels of a BDSM nightclub, an otherworld that feels here-and-now except for the magic suffusing it. "Seasonal Work" by Nina Kiriki Hoffman is an exceptionally brief piece of mystic realism (or perhaps there's no genre involved--that's almost up to the reader) set at a gift-wrapping station. "Angels of a Desert Heaven" by Marguerite Reed sets up the question of the place of gods and culture in a land with cultures both melted together and oddly segregated; it's a poignant tale that spreads itself across several, including those of rock music stardom and fortune telling. There is so much beauty here, densely packed yet woven like gossamer thread. Buy a copy for your

Published by Thriftbooks.com User , 13 years ago
We are all the beneficiaries of Eric Marin's impeccable taste with this collection. These stories are fantasy from unique angles and perspectives, including an alternate Wild West werewolf story and a stylish joint by Gavin Grant. This reader is a shoebox full of unexpected coolness and would make an excellent gift.
Copyright © 2022 Thriftbooks.com Terms of Use | Privacy Policy | Do Not Sell My Personal Information | Accessibility Statement
ThriftBooks® and the ThriftBooks® logo are registered trademarks of Thrift Books Global, LLC