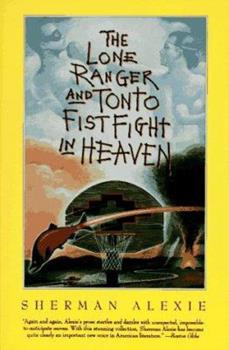 The Lone Ranger and Tonto Fistfight in Heaven

This description may be from another edition of this product. "Alexie's prose startles and dazzles with unexpected, impossible-to-anticipate moves. These are cultural love stories, and we laugh on every page with a fist tight around our hearts."-- The Boston...

Published by Thriftbooks.com User , 3 years ago
Sherman Alexie is a voice like no other. He opens our eyes to the world of the reservation with pure honesty and abundant humanity. His words are perfect, his stories exceptional. He grabs our hearts and doesn’t let go. We come to know him in pain, in purpose, and in unfolding vision. The people in his life are as real in expression and experience. I am forever a fan of this author.

Published by Thriftbooks.com User , 4 years ago
If you want a happy book, then this is not the book for you. There are happy bits to it, and it ends on a more positive story, but don't open it and expect a good time to be had by all. I absolutely loved his book and I would love to read it again sometime.

Published by Thriftbooks.com User , 17 years ago
I should preface this book with a personal explanation. The best way to approach Sherman Alexie is to look into your own personal history regarding American Indians. For me, I grew up with the vague notion that Indians didn't exist anymore. I think a lot of kids that don't live near large Native American populations suffer from this perception. I mean, where in popular culture do you ever come across a modern day Indian? There was that movie "Smoke Signals" (based on one of the stories in this book) and possibly the television show "Northern Exposure" but that is it, ladies and gentlemen. In my own life, realization hit when I started Junior High and read "One Flew Over the Cuckoo's Nest" for the very first time. If you've read the book then you know that it dwells on the character "Chief" and his past. I read about him and found out that I knew diddly over squat about Native Americans. They show "Dances With Wolves" in high school homeroom and through that you're supposed to infer contemporary Indian culture? That's like watching "Gone With the Wind" and wondering where all the happy slaves are today. It doesn't make sense. This is why I'm nominating, "The Lone Ranger and Tonto Fistfight In Heaven" as the book that should be required in every Junior High and High School in the country immediately. We've all read our "Catcher In the Rye" and "Scarlet Letter". Now let's read something real. The book is a collection of short stories, all containing repeating characters and events. There is no single plot to the story and while the character of Victor is probably the closest thing the book has to a protagonist, he hardly hogs the spotlight for very long. In this book we witness a single Spokane Reservation. We watch personal triumphs and repeated failures and mistakes. Author Alexie draws on history, tradition, and contemporary realism to convey the current state of the American Indian. You'll learn more than you thought to. My favorite chapter in this book, bar none, is "A Good Story". In it, a character's mother mentions that her son's stories are always kind of depressing. By this point the reader is more than halfway through the book and has probably thought the same thing (deny it though they might). In response, Junior tells a story that isn't depressing. Just thoughtful and interesting. It's as if Alexie himself has conceded briefly that, no, the stories in this book aren't of the cheery happy-go-lucky nature the reader might be looking for. That's probably because the stories are desperately real and fantastical all at once. To be honest, I feel a bit inadequate reviewing this book. It's obvious that Alexie is probably the greatest writer of his generation. Hence, these stories are infinitely readable and distressing. This is a good book. This is the book to read when you ask yourself, "What author haven't I ever read before?". This is the book you will find yourself poring over on subways, buses, and ta

Published by Thriftbooks.com User , 20 years ago
This is my personal measure of Sherman Alexie, the gifted young Spokane/Coeur d'Alene Indian writer: He caught my attention in a recently rebroadcast "60 Minutes" feature story. What appealed to me was his sardonic wit--edgy, thoughtful, ironic, challenging, and, yes, I thought, a bit sad. I told myself, Let's see if he can really write, let's see what he's got to say. So I pick up one of his books of prose; within a week, I had read three. This outstanding collection of interrelated stories was the first. Very, very impressive! I loved his writing, his crisp, bone simple and straight style. I felt for his finely etched characters, a handful of them--especially one named Victor, presumably the author's stand-in--recurring throughout. And these are all stories with bite."Maybe hunger informs our lives," says the narrating voice of "Family Portrait." Roughly the first half of this book exposes us to what it means to be "Native American" today: The spoils of defeat--the tight-lipped, self-destructive despair of a once proud, historic people reduced to segregated conditions. Isolated from the white world, isolated from their own traditions. Subject to poor housing, education and food, chronic unemployment, rampant alcoholism, diabetes, blood fights and bloody ends.Alexie's sharp depictions of conflicted identity, uncertainty in the everyday and lifelong struggles for survival on the Spokane Indian reservation, the contradictory capacities for tenderness and tragedy, beauty and brutality, breaks down our detachment, jars us into realizing both the unique and common human attributes of his people. What he induces is simply called "empathy." As another who grew up in a "reservation"--"the urban ghetto"--I felt that same incoherent rage that plagues so many of his characters. In the commonweal of pain, it was a further demonstration that "you can take the boy out of the country, but you can't take the country out of the boy." Yeah, okay--"empathy." At the halfway point, I was ready to start writing this review--no question, Alexie had shown he had the literary goods and I wanted to proclaim it--but something told me, first finish the book. Good thing. Why? Because he tricked me--he still held an ace up his storytelling sleeve. "Hope feeds among the tombs," Melville wrote. "Always darkest before the daylight," goes the tireless adage we've all heard somewhere from our elders. "That's how I do this life sometimes by making the ordinary just like magic," says the narrator in one of Alexie's stories ("Jesus Christ's Brother is Alive and Well on the Spokane Indian Reservation"). "Every Indian learns how to be a magician and learns how to misdirect attention and the dark hand is always quicker than the white eye . . . no matter how close you get to my heart you will never find out my secrets and I'll never tell you and I'll never show you the same trick twice." Might be Alexie begins his sleight of hand with the (deliberately) Kafka-esque tale of the trial of

Published by Thriftbooks.com User , 20 years ago
I initially picked this book up for two reasons--I liked Alexie's novel, Indian Killer, and more importantly because I live in Spokane, WA and have traveled extensively through the Reservations and towns that are described in the stories. The descriptions and the characters are very realistic, the names and places are not very fictionalized, and it makes me feel right at home. Fortunately for those readers not privleged to live in the Inland Northwest, the stories also teach a lot about Indian culture, the modern Native American and their heritage. It is a disturbing picture at times with too much alcaholism, violence, and racism, but underneath it all there is a great deal of love which makes the stories comforting and redeeming. Alexie has a lyrical voice, and when combined with his authenticsity, beautiful, rich stories are produced. Aside from those academic traits, he is also very funny, honest, and affectionate throughout, and those qualities are what I will remember about this book far more than the descriptions of familiar hotels on Third Avenue and the basketball games played between Springdale and Wellpinit. It is a great, quick read, and a wonderful way to pass an afternoon.

Published by Thriftbooks.com User , 20 years ago
Real life, on and off the Reservation. This is a collection of insightful, unflinching, yet sometimes laugh-out-loud funny snapshots of contemporary Native American life. Here is one of my favorites: "Adrian and I sat on the porch and watched the reservation. Nothing happened. From our chairs made rockers by unsteady legs, we could see that the only traffic signal on the reservation had stopped working. ... We watched the grass grow and the rivers flow." (Which, of course, is treaty language.) "It's hard to be optimistic on the reservation. When a glass sits on a table here, people don't wonder if it's half filled or half empty. They just hope it's good beer. Still, Indians have a way of surviving. But it's almost like Indians can easily survive the big stuff. Mass murder, loss of language and land rights. It's the small things that hurt the most. The white waitress who wouldn't take an order, Tonto, the Washington Redskins."

Published by Thriftbooks.com User , 21 years ago
This is an awesome collection, but when you read it, keep in mind that the stories are not supposed to be connected. Each wonderful story stands on its own and portrays reservation life from the perspective of different characters, although some characters appear peripherally in more than one story. Some may say that Alexie is angry and that this book describes a life of alcoholic depressiveness on the Rez; in reality he is just describing much of what is. There is love and caring and pride and intelligence right next to the stuff one might consider ugly. Reading this book will alternately make you sad and happy--that's what Life is anyway.And go rent the movie, Smoke Signals; Alexie wrote the screenplay for it based on some of the scenes from this book, but don't expect the book to be like the movie or vice versa. Alexie is a talented young writer who deserves the attention he is getting.
Copyright © 2020 Thriftbooks.com Terms of Use | Privacy Policy | Do Not Sell My Personal Information | Accessibility Statement
ThriftBooks® and the ThriftBooks® logo are registered trademarks of Thrift Books Global, LLC