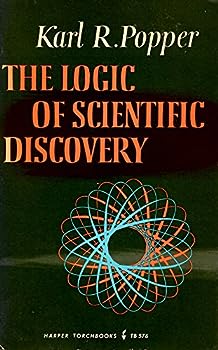 When first published in 1959, this book revolutionized contemporary thinking about science and knowledge. It remains the one of the most widely read books about science to come out of the twentieth century.

Published by Thriftbooks.com User , 19 years ago
This is Popper's early masterpiece, which still deserves to be thoroughly read. Thesis of the book: theories are guesses which have no secure basis and can be at any time overthrown, but which must be able to stick out their necks and face experimental tests. If they pass the tests, this does not make them any more secure or reliable than they were before. Its first chapter explains two fundamental problems which will be grappled with in the following chapters: the problem of induction and the problem of demarcation (between science and non-science). The solution to the first problem is straightforward: there is no such thing as induction. If you want to learn more on Popper's formulation and purported solution of this problem, you should read the whole book. The second chapter gives some methodological rules which, though presented as conventions, are set down in order to combat "conventionalism", the attempt to regard theories as irrefutable, as true by convention. The third chapter, a bit boring, is an analysis of causality, scientific explanation, the kinds of scientific concepts and the structure of theories (these are considered interpreted axiomatic systems). The fourth chapter deals with the notion of falsifiability, something theories must have in order to be scientific according to Popper's criterion of demarcation. Falsifiability, as here defined, is (roughly) incompatibility with at least one singular statement reporting the existence of an observable event (the distinction between occurrences and events will be found here; it was previously drawn by Bertrand Russell, I may add). The fifth chapter deals with these last kind of statements (basic statements): their form, their content and their role in science. These statements are in no sense justified by experience, says Popper, even if their acceptance is caused by experience; they are as risky as theories, although in scientific practice there is not (usually) much trouble in agreeing to accept or to reject them. It is a pity that Popper says that basic statements are accepted by a "free choice" or convention, because it is only after observing that the popperian Forscher will agree to accept a basic statement. The sixth chapter tries to define comparative criteria of falsifiability. Given that all scientific theories have an infinity of observable consequences, how are we to compare their boldness = refutability = their sticking out their necks? I am running out of words. The seventh chapter deals with the notion of simplicity. Popper's thesis here is: simplicity = boldness = falsifiability; a simple thesis, and a bold one. The eighth chapter contains a deft and clear discussion of some methodological and mathematical problems of probability. I highly recommend it. It is after reading a chapter like these that you can realize how cheap and misleading the criticisms of Stove are to which some previous reviewers refered. Chapter 9 contains a plea for objectivism in quan

Published by Thriftbooks.com User , 20 years ago
This is the book where Popper first introduced his famous "solution" to the problem of induction. Originally publish in German in 1934, this version is Popper's own English translation undertaken in the 1950s. It should go without saying that the book is a classic in philosophic epistemology--perhaps the most important such work to appear since Hume's "An Enquiry Concerning Human Understanding." Popper argues that scientific theories can never be proven, merely tested and corroborated. Scientific inquiry is distinguished from all other types of investigation by its testability, or, as Popper put, by the falsifiability of its theories. Unfalsifiable theories are unscientific precisely because they cannot be tested.Popper has always been known for his straightforward, lucid writing style. There are no books on epistemology that are as easy to read and understand than Popper's. Nonetheless, of all Popper's books, "Logic of Scientific Discovery" is easily the most difficult. I don't know whether it is because it was his first book or because it was originally written in German or because of all the technical problems in probability and quantum theory that are dealt within its pages. Whatever the reason, this book, despite its tremendous importance, cannot be recommended to those seeking an introduction to Popper's thinking (and Popper, whether you agree with his conclusions or not, is well worth getting to know). For those who merely want a rough overview of Popper's opinions, perhaps the best book is "Popper Selections," edited by David Miller. For those eager for more depth, I would recommend "Realism and the Aim of Science." Popper no where makes a better case for his epistemological views than in this eminently readable book. Further elaborations of Popper's views can be read in "Conjectures and Refutations" and "Objective Knowledge."Popper has been severely attacked by philosophers who are offended by his bold fallibilism and anti-dogmatism. No philosopher attacked Popper more strenuously than David Stove. Stove's criticisms are interesting, but they are not as conclusive as one disparaging critic has suggested. Stove makes three main arguments against Popper: (1) Popper theories are bad because they lead to the epistemological relativism of Kuhn, Lakatos, and Feyerabend; (2) Popper's dismissal of induction is contrary to common sense and is therefore "irrational"; and (3) Popper's argument on behalf of "conjectural knowledge" is fallacious because the phrase "conjectural knowledge" is a contradiction in terms. All three of these arguments are logically fallacious. The first commits the fallacy of "argument ad consequentiam," which tries to refute the truth of a doctrine by associating it to its (alleged) consequences. This is, in a way, a sort of guilt by association argument. The second argument simply assumes the very point at issue. No where in his book on Popper does Stove attempt to prove that induction is rational. H

THE fundamental treatise on the scientific method.

Published by Thriftbooks.com User , 21 years ago
In The Logic of Scientific Discovery Karl Popper presents hisbrilliant thesis that no amount of positive experimentatal results canprove a scientific theory to be correct but a single negative resultcan prove a theory to be wrong. According to Popper, science is not acollection of established laws but rather a system by which hypothesesare tested experimentally. If a hypothesis survives numerous rigorousexperiments, it gains plausability -- but it can never be definitivelyproven to be completely correct. This view is discomforting to manyscientists but, nevertheless, has become the dominant view in recentyears. As a research scientist with 43 years experience, I welcomePopper's position that science is a vibrant process ofcontinuing hypothesis and experimentation rather than a stagnantcollection of unquestionable truths.

A philosophical classic of unrivalled rigor and depth.

Published by Thriftbooks.com User , 22 years ago
With decisive arguments, succinctly put, Popper finishes off inductivist philosophy of science, and follows Hume in noting that its probabilistic version flounders on the same rocks. In its place he puts falsificationism, whereby we at best edge nearer the truth by refuting erroneous ideas. His attempt to line up content, simplicity, depth, and possibly even elegance, with the parameters of falsifiability is a tour de force. The later chapters on probability and quantum theory are difficult, but the book can be enjoyed without them. It is a tough read because Popper never wastes a word, and because he invariably deals dialectically with objections to his own ideas. The reader has to stay alert not to confuse his claims with those he is rebutting.
Copyright © 2020 Thriftbooks.com Terms of Use | Privacy Policy | Do Not Sell My Personal Information | Accessibility Statement
ThriftBooks® and the ThriftBooks® logo are registered trademarks of Thrift Books Global, LLC