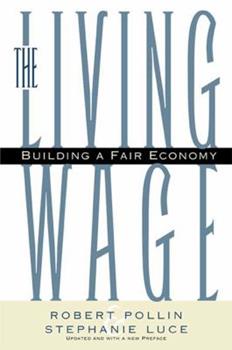 by Stephanie Luce and Robert Pollin

With campaigns for a living wage sweeping the country, here is an accessible and provocative argument for a national "living wage." Hailed as "the bible of the living wage movement," The Living Wage... This description may be from another edition of this product.

The Bible of the Living Wage Movement

Published by Thriftbooks.com User , 22 years ago
Review of The Living Wage: Building a Fair Economy by Robert Pollin and Stephanie LuceEvery so often a work of contemporary issue analysis comes along that illuminates the often-arcane world of professional activists in language that renders it accessible to the general public. In The Living Wage: Building a Fair Economy (New Press), economists Robert Pollin and Stephanie Luce have not only provided a long-overdue assessment of the fifty-plus living wage campaigns across the country, they have created an invaluable tool for the organizers currently engaged in those efforts. Since the book's printing, I've found grateful readers and dog-eared copies in campaign offices from Montana to Maryland. Since the modern living wage movement began with the passage of the Baltimore living wage ordinance in 1994, more than twenty-five cities and counties have passed living wage laws, and campaigns are underway in over two dozen more jurisdictions, making the effort "the most interesting (and under-reported) grassroots enterprise to emerge since the civil rights movement" according to the journalist Robert Kuttner. Defenders of other political movements of the last thirty years might disagree, but there's no question that the thousands of workers who have received a raise or new benefits due to a living wage law appreciate their significance.The campaigns, which begin with the idea that no one working full time should be forced to live in poverty, require businesses receiving public dollars to pay wages significantly above the minimum wage, usually enough to raise a family at or above the poverty level. Many organizers would prefer to cover more workers by raising the minimum wage for all jobs, but where that is not legal or politically viable, the efforts target jobs created with public dollars -- namely public employees, employees working for public contractors, and in many jurisdictions, workers employed in businesses receiving public subsidies, whether industrial revenue bonds, low-interest loans, or tax abatements. Most of the campaigns have met with fierce resistance from both the business community and elected officials, who have fought the passage of ordinances and worked to evade them after approval. Baltimore quickly moved to hire workfare workers for city contract work immediately after the passage of is ordinance. Minneapolis has found creative ways to distribute corporate subsidies without requiring recipients to comply with the laws. Pollin and Luce, who headed the economics team that researched the cost of the Los Angeles Living Wage Ordinance, convincingly debunk opponents' claims that living wage laws add enormous costs to financially strapped municipalities and create unemployment among the very populations they are intended to help. They cite an initial study of the effects of the Baltimore ordinance by the Preamble Center for Public Policy. Based on phone interviews with contractors, Mark W
Copyright © 2022 Thriftbooks.com Terms of Use | Privacy Policy | Do Not Sell My Personal Information | Accessibility Statement
ThriftBooks® and the ThriftBooks® logo are registered trademarks of Thrift Books Global, LLC