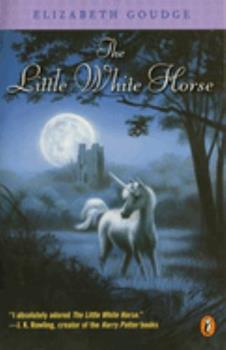 I absolutely adored The Little White Horse.--J.K. Rowling, creator of the Harry Potter series Winner of the Carnegie Medal When orphaned young Maria Merryweather arrives at Moonacre Manor, she feels as if she's entered Paradise. Her new guardian, her uncle Sir Benjamin, is kind and funny; the Manor itself feels like home right away; and every person and animal she meets is like an old friend. But there is something incredibly sad beneath all of this...

Published by Lisa , 2 years ago
Loved this so much.

Published by Thriftbooks.com User , 20 years ago
It's too bad that so few of Elizabeth Goudge's books are in print, though I am grateful that this one has been reprinted. I'd never read it before, and initially I was turned off by the unicorn illustration on the cover. But I'd heard lots of comments about how magical it was, and so I sat down to read.Newly orphaned Maria Merryweather is being sent from London to Moonacre Manor, the castle-like home of her uncle, Benjamin Merryweather. Initially Maria and her devoted governess Miss Heliotrope expect the place to be cold and uncomfortable -- but Maria is delighted to see an enchanted, silvery landscape, and the brief vision of a white horse running past. She fits quickly into the slightly strange, almost idyllic surroundings -- despite the fact that no woman has come to Moonacre Manor in twenty years. But Sir Benjamin seems very pleasant -- as does the huge, unusual dog Wrolf.Maria is enchanted both by the beautiful natural surroundings and the neighboring village of Silverydew. But she begins to sense that something is wrong: her uncle is unhappy about something and won't talk about the briefly-seen white horse. Her childhood invisible friend Robin returns to her -- and the inhabitants of Silverydew know him. Beautiful items are laid out in her tiny, luxurious room -- with the initials L.M. And strange dark figures are creeping through the woods near the sea. Maria soon finds out about a long-lasting story of magic, sadness, greed and darkness that has haunted her family for generations, and is determined to set it right.Goudge was evidently one of the few authors who can effectively blur the line between reality and dreaminess. Some sections of her prose are almost intoxicating; she never held back from describing surroundings and items lushly. The dreamy atmosphere of the book is established when Maria and Miss Heliotrope (and Wiggins the dog) arrive at Moonacre. Such beautifully written passages crop up, such as "moonlight and firelight mingled their silver and gold." We also are given examples of Ms. Goudge's evident love of both nature, the countryside, and religion (not preachily, simply a demonstration of the beauties she saw in it). She also mixes in a few other items: the hare being a "Fairy" creature, the legend behind the Merryweathers and the valley, the sinister Black Men in the forest, and the enchanting visualization of the "little white horse" being one of the white horses that crashes in on sea foam.Some aspects of this book are a little unusual by current politically correct standards: we get several negative references to "female curiosity", atheists may be offended by Ms. Goudge's evident dislike of atheism. And I literally have no idea what a "syllabub" is. However, since this takes place in a past era, there's no reason to fuss about it.Maria herself is a delightful heroine, with just enough quirks to make her realistic -- her mild preoccupation with clothes, for example. Miss Heliotrope is not the usual strict spinster gov

A Book For All Ages ... and For The Ages

Published by Thriftbooks.com User , 22 years ago
I first read Elizabeth Goudge when I was 11 and I fell instantly in love with her writing. I read this book later than some of her others and I was enchanted immediately; and every time I re-read it, the enchantment returns. While I read, I am with Maria and Robin at Moonacre Manor, riding with them on their adventures, singing the Bell Song, confronting the Men of the Black Wood. I was thrilled to buy my own copy so I can read it whenever I want and not rely on the Public Library. And despite the fact that my copy has only the endpiece illustration of the Manor and its grounds, I can picture everyone and everywhere vividly. Goudge is a writer of true genius. Everything her characters do is completely consistent. Even the religion in the plot, and there is a lot, is not offensive or preachy. It fits perfectly into the whole ambience of the book. This is because Goudge was herself a deeply religious woman and the value she found in her faith is an integral part of all her novels. This book is worth 10 of most of the modern children's books. Moonacre Manor stands proudly with Narnia and Middle Earth.

The magic is real...

Published by Thriftbooks.com User , 22 years ago
This was the favorite book of my childhood. I loved the old English setting, Maria's tower room, and all the details of her life - but what I liked most of all was the unique quality this story has of hovering somewhere between fairy tale and real life, between fantasy and reality. There is just enough magic to make you believe that, just maybe, it could be true, it could happen to you. At the heart of the story is the poignant, dream-like image of the little white horse- I think consciously put in as a symbol of all those vague, undefined, unspoken longings that are hidden deep inside ourselves. I wrote a college paper on this book in my twenties and could still see no flaws in it; only now in my fourties reading it to my daughter am I able to note that the writing is a bit clumsy and heavy handed at times. But I still can't stop hoping - believing - that someday, looking down a forest glade, I at last will see the glowing unicorn in the distance.

The Magic of The Little White Horse

Published by Thriftbooks.com User , 22 years ago
The Little White Horse is an exceptional and magical book. I have read few books that can compare with the imaginative imagery, the depth of the characters and the originality of the story. The protagonist, Maria Merryweather, is thirteen years old at the start of the book. She, her governess, and her pet dog, are travelling to Merryweather Manor by coach to stay with her great-uncle after her father's death. Her explorations of the delightully described manor and the nearby village of Silverydew lead her to see that not all is as happy as it seems. Before she knows it, she finds a destiny before her that builds up to a decision between selfishness, as her ancestors have done, and humbleness and selflessness. Only then can the wrongs be righted and Maria see her little white horse she dreams of. I enjoyed the book because of the lovely descriptions of the manor and the valley, and the realisticness of the characters. Maria and her friends are not perfect heroes and heroines, but they are lovable and their character developing is crucial to the plot. The book keeps you reading as you discover with Maria the secrets of the manor and the village. Elizabeth Goudge's skillful imagery conjure up a wonderful picture of the 19th century English town where the magic is timeless. If you enjoy fantasy and magic, you will love this book.

One of my all-time favorite books!

Published by Thriftbooks.com User , 24 years ago
My mother was a voracious reader and instilled the same appreciation of books in me. I first read this book when I was about 10 years old. I must have read it a hundred times at least! The writing was so vivid, I can still close my eyes and picture Maria and company having their sumptuous meals at Moonacre Manor; the angry darkness of the Black Men; and the gentle, wizened face of Digweed. Twenty years later, it's still one of my all-time favorites. A few years ago, I tried to find a copy of the original edition--my childhood copy was destroyed during Hurricane Gilbert in Jamaica some years ago. I was quite disappointed when the book I did find came without the magnificent illustrations and maps contained in the original. I'd love to get a copy of an earlier edition for my children!

The Little White Horse Mentions in Our Blog

7 Books J.K. Rowling Loves
Published by Beth Clark • November 16, 2018
Long before she became the queen of Twitter or the beloved author of Harry Potter, J.K. Rowling was (and still is) a voracious reader...a habit she shares with the majority of the world's ultra-successful people. Keep reading for 7 books she loves—the author who inspired her fangirl moment might surprise you. (Hint: they have the same hair color.)
Read Article
Trustpilot
Copyright © 2022 Thriftbooks.com Terms of Use | Privacy Policy | Do Not Sell or Share My Personal Information | Accessibility Statement
ThriftBooks® and the ThriftBooks® logo are registered trademarks of Thrift Books Global, LLC