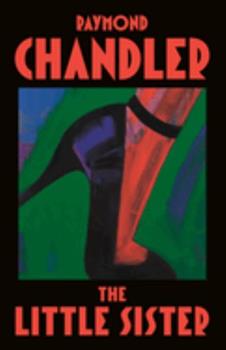 (Book #5 in the Philip Marlowe Series)

Crime fiction master Raymond Chandler's fifth novel featuring Philip Marlowe, the "quintessential urban private eye" ( Los Angeles Times ). In noir master Raymond Chandler's The Little Sister , a movie starlet with a gangster boyfriend and a pair of siblings with a shared secret lure private eye Philip Marlowe into the less than glamorous and more than a little dangerous world of Hollywood fame. Chandler's first foray into the industry that dominates...

Published by Thriftbooks.com User , 13 years ago
I'm not a fan of thrillers or mysteries. I'm only a casual fan of 'Noire'. Chandler's "The Little Sister" is probably one of the most intense books written in any genre. This is a book of moods: incredible evocations of a time and place and feeling that I have never encountered before. If you aspire to be a writer simply reading this book will teach you a hundred things that can make your writing brilliant. From a small dim shack where a suicide has taken place to a lavish mansion where a vamp waits in a darkened salon--the moods and atmospheres Chandler creates are shimmering and electric. This is a must read.

A masterpiece of detective literature

Published by Thriftbooks.com User , 15 years ago
From the moment when the `Little Sister' appears in his office -pathetic, appealing but with something strangely phoney about her- private detective Philip Marlowe gets into a series of strange and increasingly violent happenings. Marlowe tries futilely to reunite a scattered family: a dead blackmailer, a rising movie star and a girl named Orfamay Quest. In sorting out the mystery, Marlowe gets involved with picture people, including a powerful agent, a half-senile studio head and the muscle the studios call out to deal with blackmailers. Some of them have ice picks sticking out of their necks. And of course, he has to take care of those corrupt small-town cops from Bay City. From the first words of the Little Sister you immediately get into that typical film noir mood. The way Chandler describes the shabby office of Philip Marlowe gets you really going. You breathe and smell the decadence of the 1940's and know that you have to get ready for a rollercoaster ride through many intrigues. With the hand of the master Chandler weaves all the evidence into a complex web and keeps you on edge to find the solution. But be prepared, the plot is getting complex very fast and the denouement might come as a total surprise if you do not watch out very carefully. But then again, the real joy of the novel is not in trying to figure out who is who, and who did what, but in the way Chandler lets the mystery unfold. By the time Raymond Chandler wrote The Little Sister, he had written several screenplays for Hollywood pictures. He did not earn that much money by writing books, so he needed the dough he was offered by the Tinseltown people. This does not mean that he enjoyed this very much. There is plenty of cynicism directed towards Hollywood. It seems as if The Little Sister is some kind of getting even with how Chandler was treated by the major film bosses.

Published by Thriftbooks.com User , 16 years ago
This is my favorite Raymond Chandler novel. After reading the first two pages, describing a bored Philip Marlowe watching a blue bottle fly, I set the book down and said, "Chandler! you are one cocky son-of-a-bitch!" Amazing stuff! Though I read the book years ago, I still remember Marlowe's visit to a Hollywood producer. Can there be anything in literature better conveying the stench of greed and magalomania?

More than a Crime Novelist

Published by Thriftbooks.com User , 19 years ago
The latest in a long series of visits to LA had me refreshing my memory of one of my favourite novelists. As a young man I knew the Philip Marlowe books nearly by heart before I ever set foot in the city they put on the literary map. I have always thought that Chandler counts as literature not just as crime fiction. He was a professed admirer of the ultra-craftsman Flaubert, and it shows in the way he works at every sentence, indeed every word. He was English and as far as I know unrelated to the 'real' LA Chandlers (he attended the same school as P G Wodehouse, if you can believe it). He maintained that 'the American language' can say anything and in The Simple Art of Murder he took a brilliant potshot at the Agatha Christie school of English crime fiction , all tight-lipped butlers polishing the georgian silver and respectful upper-middles gathered to hear the amateur master-sleuth analyse over 5 or 6 pages which of them dunnit. His power of creating atmosphere is phenomenal, his dialogue is legendary, and for me The Little Sister is the best of the 7 Marlowes. It's at the crest of the hill, before he started to lose concentration in The Long Goodbye and lost just about everything in the sad Playback. I can still feel the heavy heat at the start of the book, and the dialogue is the best he ever did. Is there any other instance of anyone silencing Marlowe with an answer the way the beat-up hotel dick does when Marlowe tells him he is going up to room such-and-such and the hotel dick says 'Am I stopping you?'. And I cherish the bit about the same character tucking his gun into his waistband 'in an emergency he could probably have got it out in less than a minute'. I can't even yet follow the plot, but actually I have never been able to follow any Chandler plot, though I suspect the author himself lost his way in this one. It's maybe the first sign of the decline that set in next -- Marlowe is beginning to feel old and tired and he is probably speaking for more than himself. The plot is really neither here nor there. The only fully developed character is Marlowe himself, but Mavis Weld comes over well, the little sister herself is a memorable grotesque and see what you make of Dolores Gonzalez. The other major character is Los Angeles itself, which fascinates me as it obviously fascinated its adopted son Chandler. Half a century and more on from the time of writing I can still get the feel of Chandler's LA.

Published by Thriftbooks.com User , 22 years ago
I just finished reading "The High Window" and got hooked so I went right out and bought "The Little Sister". I'm not sorry. It's even better! Now I'll have to go buy "Trouble is My Business". I only have about 40 pages left and I don't want it to end yet. Raymond Chandler is the best.
Copyright © 2020 Thriftbooks.com Terms of Use | Privacy Policy | Do Not Sell My Personal Information | Accessibility Statement
ThriftBooks® and the ThriftBooks® logo are registered trademarks of Thrift Books Global, LLC