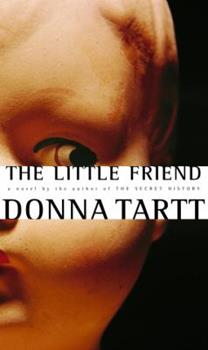 The hugely anticipated new novel by the author ofThe Secret History-a best-seller nationwide and around the world, and one of the most astonishing debuts in recent times-The Little Friendis even more transfixing and resonant. In a small Mississippi town, Harriet Cleve Dusfresnes grows up in the shadow of her brother, who-when she was only a baby-was found hanging dead from a black-tupelo tree in their yard. His killer was never identified, nor has...

Published by Delivery Girl , 8 months ago
I liked Harriet, but that was about it. I thought about giving up on this book because it was too wordy and long. However, I hung in there and finished it, but I felt like there were things that were not wrapped up. I felt irritated and disappointed when I finished it.

Published by Last Orders , 2 years ago
When I started reading this novel, I was gung ho about the characters and Donna Tartt's colorful descriptions. The plot was all right, but I did not enjoy all of the pages devoted to snakes. Harriet is fascinating character, but after plowing through the first 386 pages, I started seeing a pattern. Occasionally,the author diverges from the plot and goes off into an unrelated interlude of fifteen or twenty pages discussing something else. I am lost. What happened to Harriet? I decided to lay the book aside for a while. Maybe I will return to this story at a later time. I was disappointed that the structure of the story is not as tight as the plot in "The Goldfinch," which I believe is a stellar novel in several respects.

The essence of pure literature

Published by Thriftbooks.com User , 16 years ago
Hands down, no doubt about it, this is the best novel I have read in a while. It was dangerous to pick it up at night, because I would keep on reading, and reading, and would bargain with myself, "only to the next paragraph", only to get deeper in the story. All along, I thought of Dickens. This is a complex novel, with a huge cast of characters and plenty of subplots and background commentary. In a nutshell: Harriet's nine-year-old brother was murdered in his own backyard, when Harriet was just a baby. This event destroyed the family: the mother never recovered and the father accepted a job promotion in a different state. Harriet is an odd, very unconventional 12-year-old with a vivid imagination, who admires Houdini and Captain Scott. She sets on a quest to discover who killed her brother, and enlists her best friend Hely, a boy who is as scatter-brained as Harriet is sharp. This quest, which starts innocently enough, gets them entangled with a scary family of methamphetamine dealers, at great risk for their lives. Harriet's extended family, her grandmother and her three sisters, along with the black housekeeper, make for a rich cast that enhances the story. Some of my favorite passages had to do with Harriet's thoughts about Ida, the black maid. The description of the relationship between Harriet and her aunt Libby has to be one of the most satisfying pieces of writing I have ever read. And then there is the sociological landscape of the novel! Black-white relations in Mississippi in the early 70s, the class divide between whites, the stigma of being born on the wrong side of the tracks, the religious zeal that pervades everything, the world seen from the eyes of a smart girl, who is hardly ever taken seriously by her family: "Quietly, Libby turned to Harriet for a long moment, and her watery old eyes were steady and compassionate. It's awful being a child," she said, simply, "at the mercy of other people." I can't believe the poor ratings! If you get dismayed at 600+ pages, this is not for you. If you are looking for a murder mystery, this is not for you. If you want tons of action and dialog, stay away. This novel is, for me, the essence of pure literature. What am I supposed to read after this? I am once again reaffirmed on my belief that the best fiction in this country comes out of Southern women. Amen!

Has flaws, but still exceeds the average novel by far

Published by Thriftbooks.com User , 16 years ago
I loved Donna Tartt's first novel, The Secret History, immmensely and waiting for her second novel for years. I really wish I could say that this book exceeded the achievement of that book, but I can't. Nonetheless, I still think this far exceeds most of what is out there. Tartt is a master of rendering the settings of her stories. This one really embraces childhood in the deep south. The characters, if not quite real, are certainly undertandable and detailed. Her theme here is dark. This novel is about bad deeds and punishment and the mood in the aftermath of death. The research is very good here and it feels very true. It is effective and well written, but a little heavier on symbolism than I prefer. Nonetheless, as I said earlier, I very much liked this book and highly recommend it.

Published by Thriftbooks.com User , 17 years ago
After glancing at the other reviews and at the fact that this is now a BARGAIN book (??!!), I felt I had a duty to give some recommendation. I noticed one reviewer said that the characters were 'one-dimensional;' he clearly did not read the book. If there is one criticism you can absolutely not make about this book, it's that the characters are 1D. Or even 2D. They are fantastically believable, achingly beautiful--in fact, I think that's the best reason to read this book. Except, perhaps, for the great storyline. And I daresay that, even though the ending is not exactly resolved, you probably won't care. By that point, it's clear that it's not the issue at hand--this isn't really a mystery novel. It's about the people. And yes, I think this book is scores better than her first one, which I thought fell rather flat. But that's just me.

Sad, comic, and a perfect portrayal of the South

Published by Thriftbooks.com User , 20 years ago
I think a lot of readers have approached this book expecting to read (a) a mystery that is wrapped up neatly at the end or (b) a follow-up to _The Secret History_. This book should not be read as a mystery. It is, instead, a vivid coming-of-age novel about a little girl in the South of the 1970s. As a Southerner who grew up in a town that was very similar to Alexandria, Mississippi, I can vouch for the accuracy of Tartt's portrayal. It's all there: the crazy extended families (all living nearby and constantly in each other's business), the Pentecostal preachers, the Baptist church camp, the tangled and conflicted ways that black people and white people relate to each other. This novel follows in the tradition of great Southern writers like Flannery O'Connor, Eudora Welty, and Ellen Gilchrist.

Published by Thriftbooks.com User , 20 years ago
I don't understand what's the matter. There seems to be a rampant boycott going on about this novel, but I must say I find it ridiculous. All the naysayers are calling this book boring and the author racist.Come on!The book is set in the summer of 1970, and it should be noted that the social climate is captured with pitch-perfect ear. Harriet is a very well developed character and on her back she carries the whole weight of this engrossing, captivating and mysterious narrative, populated by eccentric characters and bizarre situations. Through her eyes we see how life can change in the blink of an eye. The horror of discovering the truth beneath the lies we have come to believe staunchly results in a chilling climax.Maybe I will be stoned by all the readers who don't like this book or don't get it. Anyhow, Donna Tartt's voice resounds long after closing the final pages. And it does what not many novels can: it can make you laugh and shudder sometimes in the same chapter, and that IS the purpose of the novel: it transports you to a place you had not been before, to the skin of someone else, and for a moment, you are Harriet Cleves Dufresnes and live through her, the darkest, most significant summer of her life.
Trustpilot
Copyright © 2022 Thriftbooks.com Terms of Use | Privacy Policy | Do Not Sell My Personal Information | Cookie Preferences | Accessibility Statement
ThriftBooks® and the ThriftBooks® logo are registered trademarks of Thrift Books Global, LLC