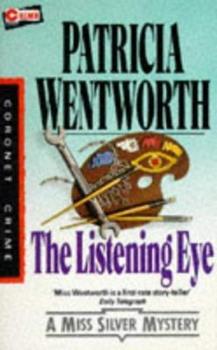 This description may be from another edition of this product. No one would ever have guessed that Paulina Paine was deaf, and that her ability to lip-read was astonishing. So the two men who met one day during the showing of a new art exhibition did not realise...

Legend says that owning a piece of Marie Antoinette's jewelry can be dangerous.

Published by Thriftbooks.com User , 13 years ago
Patricia Wentworth mysteries are books which I love to read multiple times. I first read this particular title several years ago and found that I did not specifically remember who the culprit was. Happy days for me again! Paulina Paine lost her hearing as a result of a bomb blast during the war and has learned to make the best of a bad situation. She has developed her ability to lip-read to a fine art. Often she would find herself privy to conversations which she did not want to overhear. Such was the case when she noticed the two men talking when she visited the art gallery to see the works of two young men included in the current exhibition. David Moray had painted, and sold, a picture of Paulina and even she had to admit that it was a really good depiction of her. Such good things could not be said for the art of Wilfrid Gaunt, her cousin Hilda's son. While taking a break from walking around the gallery Paulina lip-read the remarks of one of the two men who seemed to have met by accident. Only one part of the conversation was shown to her but it was enough to send her trembling from the gallery to the comfort of a good cup of tea. Paulina had seen the plans for a robbery being made and they included the murder of the person being robbed. No location, person or specific item was described. Paulina knew that the police would never believe her, there was just not enough information to give them. She did, however, know about Miss Maude Silver and she immediately made arrangements to meet with Miss Silver and tell her all about the crime which was to take place. As is often the case, once Paulina had told her story to Miss Silver, she felt so relieved that she declined to go to the police and even refused to take a taxi home. On her way home, she fell under a bus and was killed. Something which I am always fascinated by in a Patricia Wentworth mystery is to see how she will bring all her characters together in one place so that they are all involved in the mystery. This time, these people are all brought together by the fact that Lucius Bellingdon bought the picture of Paulina Paine painted by David Moray. A gathering of people is assembled at Merefields, the country house of Lucius Bellingdon and we have a chance to meet and get to know each of these characters as Miss Silver quietly sits and listenes to anything anyone says, no matter how trivial it may seem. I enjoyed this story, although it is not my favorite Miss Silver story. This one seems to have quite a bit of repititious material in it. That in itself is not unusual, Miss Silver has to relate everything she finds out to the police and to her employer. But in this book she also seems to tell it all to quite a few other people. Wentworth has given us some very strong "good" characters and some equally strong "bad" characters. There is the looked for (and thoroughly enjoyed) romance between two "bright young things". It all follows the Wentworth pattern very well.

Published by Thriftbooks.com User , 16 years ago
This is a fine example of a Miss Silver mystery. Ms. Wentworth has done a marvellous job of setting a scene and of outlining some unforgettable characters. She also proved why she was called the queen of the British country house mystery. This is as fine an example of this type of story as any that she wrote. In this book we have the cunning and intelligent Miss Silver pitted against a strong male character, and Miss Silver does not come off the worse in any of their heated exchanges. The premise for the book is also a good one. It all starts when a deaf woman lip-reads about a theft and a murder plot while she is sitting in an art gallery. Her unease about what she has seen brings her to Miss Silver, and from there Miss Silver manages to have herself in residence where she thinks that more crimes will occur. And she as always is not mistaken. This would be a good book for novices to the Miss Silver mysteries to get started reading the many books in this series.

It's the story, not the solution

Published by Thriftbooks.com User , 17 years ago
Miss Silver is wonderful in this, standing up to the rich and headstrong Mr. Bellingdon. The solution to this mystery isn't difficult or complicated but the story of Paulina Paine and her ability to read lips which leads to knowledge of a impending robbery which leads to murder. The threads are gathered by Miss Silver and she is the leading force behind the discovery of the culprit. Another great. Mostly I enjoy how Wentworth makes people come to life for me. I hope you enjoy.

Jewel theft and murder at a country house party

Published by Thriftbooks.com User , 19 years ago
Paulina Paine visited the art gallery only because David Moray, the painter who rents her attic as his apartment and studio, sent her portrait there, titled _The Listener_. She hasn't heard anything since a bomb brought her office down around her in 1942, but she never quite lost the look of listening for what she could never hear again. While resting her feet, she idly starts lip-reading the conversation of a pair of men across the gallery who would otherwise be safe from eavesdroppers - and gets a nasty shock upon learning that they're planning a hold-up, and don't care who's killed in the process of taking something away from a secretary on his way back from a bank. She gets an even worse shock later, upon learning that they noticed her, and one of them saw her portrait, and learned about her name and lip-reading from the gallery attendant.At that point, she has the good sense to use her connection with the Morays to make an appointment with Maud Silver, governess-turned-PI. Pauline tells her the whole story -and she has an excellent memory for words, although no talent for describing faces. Unfortunately, when she like so many others gets cold feet, she doesn't immediately take Maud's advice and go to the police, feeling that they'll treat her lip-reading as a fantasy. [Oddly enough, Pauline turns out to have been right - for reasons I don't pretend to fathom, Maud's friends among the police really *are* reluctant to believe anybody could have lip-read such a conversation.] The point soon becomes moot, since Pauline is killed by a hit-and-run driver before she could repeat her story to the police. Somebody miscalculated badly there, though; Maud's excellent memory and stern conscience ensure that the matter won't be dropped, and Frank Abbott and his colleagues on the Force respect her enough to face fact when Lucius Bellingdon's secretary is killed while retrieving a valuable necklace from his bank in Ledlington.Bellingdon engages Maud to go undercover as his new secretary, since the theft required inside information. She balks at this, not being a typist, but this isn't really a problem; he has 2 secretaries, the senior of which was the victim, who was really more of an assistant to Bellingdon - sorting wheat from chaff in his correspondence and so on - while the other secretary is the one required to possess the more usual job skills. Going undercover, of course, presents no problems; her experience as a governess gave her one of her greatest professional assets, the ability to pass unnoticed in a drawing room as well as on the street.Some really entertaining stuff, apart from the usual well-presented puzzle: Maud's private opinion of what people invariably say when information has leaked, and how little men know about what gossip really goes on; Bellingdon's widowed daughter Moira, who's too much of a Philistine to understand when David Moray wants to paint her as Medusa; Moira's old acquaintance, Moray's neighbour Sally, with her job fiel
Copyright © 2020 Thriftbooks.com Terms of Use | Privacy Policy | Do Not Sell My Personal Information | Accessibility Statement
ThriftBooks® and the ThriftBooks® logo are registered trademarks of Thrift Books Global, LLC