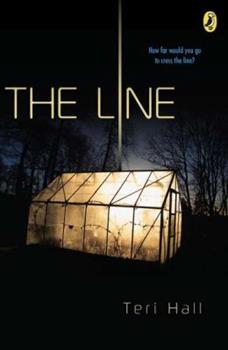 When Rachel and her mother move to Mrs. Moore's house-the one with the greenhouse, right next to the Line-Rachel starts questioning things. There are so many rumors of horrible things that lie beyond the Line-in a place called Away-but no one dares to talk about it. And it's no use asking questions- especially of Mrs. Moore, who has always lived by the Line, or of her mother, who is just happy to have a place to stay, especially since Rachel's father...

Looking forward to the next book!

Published by Thriftbooks.com User , 12 years ago
As a teacher, I have to read quite a bit of YA fiction before finding something that can truly challenge students and get them thinking. "The Line" is that book. It'll be required reading in my classes for years to come. Hall manages to render a very believable and fascinating world. Yes, it's set in the future, and yes it's dystopian, and yes, there's a big, bad government. But Hall never lets her novel devolve into a "1984" knockoff or some cheesy sci fi romp. She always keeps human emotion at the forefront. It begins with Rachel, a young woman living with her mother just on the verge of "Home," the only safe part of America left. Beyond Home, "Away" is said to be a brutal place, full of immoral savages capable of anything. Rachel soon finds a tape recorder with a message that challenges everything she once believed about Home, Away, and the Line. What transpires next is a series of revelations and plot twists that will keep readers entertained right up to the last page. It's hard to believe this is Hall's first novel. She has a superb sense of pacing. It starts off at a relaxed pace, but as you read, you find small, seemingly trivial elements, grow and fester until you realize just how monumental they are. It's like a snowball rolling down a mountain, gaining momentum as it goes. The more you read, the more you're going to want to read. And let me say this now: the ending will give a very satisfying payoff.

The Line: No Border to Its Satisfactions

Published by Thriftbooks.com User , 12 years ago
The Line: read it, keep it, remember it, recommend it. It took me back--way back--to middle school and junior high with memories of what it means on life's threshold to find a mystery, a thriller, a coming-of-age story that knows its readers from the inside. It understands that good kids aren't guaranteed perfect rapport with even the best adults under ordinary circumstances. Add secrets and dangers in a near-future USA that could be our own, pace disclosures to reward curiosity but not cut off suspense, and you've got it all. You've got The Line.

The buzz is all true!

Published by Thriftbooks.com User , 12 years ago
I just finished "The Line" and absolutely HAD to review it here ASAP. I won't go into details about the plot, since other reviewers have captured the basics. First off, there's been a lot of insider buzz on Teri Hall's first novel. I'm usually very skeptical about this sort of industry buzz, especially when it involves a newcomer (This is Hall's first novel.). So, I was surprised that within the first paragraph, Hall shredded all my trepidation. This is one of the most well-written books I have come across. There's such a beautiful interweaving of characterization, plot and writing style. Usually a novel will have one of these in spades while other elements are less than robust. Not so with "The Line." It is jaw-droppingly good. I have to admit that although this book turns into a page turner, it doesn't really start off as one. It took about four chapters until I was at the point where I was just furiously devouring pages. But all in all, "The Line" is a rare gem--in any genre, but especially in YA. The buzz is all true!

Published by Thriftbooks.com User , 12 years ago
An invisible and uncrossable barrier encloses the United States. The Line is part of the border that lopped off the country and doomed the citizens to a mysterious fate, when the enemies used a banned weapon. There are rumors about bizarre creatures and mutant humans live on the other side of The Line, in Away. Nobody would be strong enough to live there, except the old, yet tough Ms. Moore. Rachel and her mother work for Ms. Moore. They went to live there after Rachel's father died in the last war. It is a safe and quiet life by The Line. That is until Rachel finds a recording from Away and they are asking for help. Who sent the message? Why is her mother so protective? And to what lengths is Rachel willing to go in order to do what she thinks is right? Rachel was a sweet and naive girl. She didn't know a lot about what was happening with the government, after she found that recording and I also liked that she asked a lot of questions. She also grew a lot during the book. I really like how strong she became. Ms. Moore was also a strong character and I liked her attitude about life. She had a really strong personality. Jonathon was an interesting character and I could tell that he felt sorry about what he did in the past. Rachel's mom had a lot secrets and it was awesome to see into her pass.The plot of this book started out slow, but it gained speed as it went on. I found the way that the government ran to be similar to 1984's system, which while complex was interesting and simple. I found this Dystopian to be well though out and original. Hall created a well written book, with amazing characters and a fantastic plot. I can't wait for the sequel to come out in 2011, because there are so many questions that I have about what will happen in Away.

Published by Thriftbooks.com User , 12 years ago
Far away from the overcrowded cities where the oppressive government tyrannizes its people and the only thing that ensures a decent life is money, Rachel and her mother live and work quietly on The Property, owned by the distant and aloof Ms. Moore. Bordering the Property is the Line, the most notorious section of the invisible boundary that borders the country. No one is allowed in or out. No one knows what is beyond the Line...until Rachel receives a mysterious recording, begging for help. Now everyone on the Property will have to decide to do what is right, or what is safe. Teri Hall's debut novel is absolutely captivating; her smooth storytelling and completely convincing and authentic voice bring the story to life and make it all the more chilling and believable. Hall presents the history of the country in a detailed (but certainly not boring) manner that highlights political struggles, a domineering government, and the horrors and terrors that are bred with war, relating them to a society that is not unlike our own and subtly warns against the use of nuclear weapons. Those messages aside, the novel is full of strong female characters as well; resourceful Vivian who had to raise Rachel on her own, the secretive Ms. Moore, who knows more about the Line than anyone would ever suspect, and Rachel, who is torn between standing up for what is right and following in her mother's footsteps of playing it safe and becoming invisible. The Line is a complicated knot of twists and secrets, surprises and revelations that only becomes more and more complex as you delve deeper into the story. And once you believe you've untangled it all, it is then that the biggest mysteries of all are revealed. Hall's debut novel is stunning, and it will leave you hanging in anticipation of a sequel and pondering the outcomes for many hours after the final page is turned. Cover Comments: This cover is unbelievably amazing--I love how creepy it feels! The greenhouse is perfect, as it is relevant to the story, and I just love the colors used. The font is very modern, which fits as the book is a futuristic read. This is one of the best, most outstanding covers I've seen in a long time!
Trustpilot
Copyright © 2022 Thriftbooks.com Terms of Use | Privacy Policy | Do Not Sell My Personal Information | Accessibility Statement
ThriftBooks® and the ThriftBooks® logo are registered trademarks of Thrift Books Global, LLC