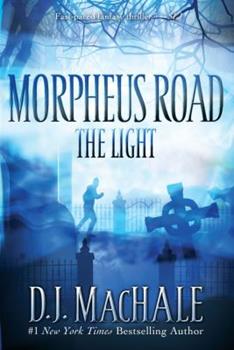 (Book #1 in the Morpheus Road Series)

Marshall Seaver is being haunted. It begins with mysterious sounds, a fleeting face outside a window, a rogue breeze--all things that can be explained away. That is, until he comes face-to-face with a character who only exists on the pages of a sketchbook--a character Marshall himself created. Marshall has no idea why he is being tormented by this forbidding creature, but he is quickly convinced it has something to do with his best friend, Cooper,...

Bought this in very good condition

Published by stormingbanana , 4 months ago
And other than the wear only the front cover - it was in great condition, so I'm happy. Thank you.

Published by Thriftbooks.com User , 11 years ago
My son is 11. He is not very motivated to read, but this book kept him going. He cannot wait for the next book to come out. He dragged me to the bookstore and library yesterday looking for it (even though it was not out). He took his AR reading test at school on this and got ten out of ten. He kept putting the book down to find me and tell me what had just happened. He LOVED this book.

Published by Thriftbooks.com User , 11 years ago
Gold Star Award Winner! Marshall Seaver is looking forward to spending the summer with his best friend, Cooper, but an incident with some phony tickets has changed all that. Cooper's family whisks him away to their lake house where he disappears. Cooper's family thinks he's just run off again, but Marshall is convinced something is wrong, especially when he starts hearing strange noises and seeing strange things. Strangest of all is the appearance of "Gravedigger," who should only exist on the pages of Marshall's sketchbook. Convinced that all the weirdness is somehow connected to Cooper's disappearance, Marshall sets out to find him. As he delves further into the mystery of his friend's disappearance, Marshall uncovers a nightmare worse than anything he could have ever imagined. The premise sounded interesting, but I had no idea what I was getting into when I opened the cover and began reading this book. The journey down the MORPHEUS ROAD thrilled me with every page turn. Though I managed to solve some of the mysteries before Marshall did, the engaging writing and characters kept me marching along the road until I reached the surprising ending. There were some bumps in the road, but not enough to give me a flat tire and make me stop reading. I couldn't get enough of MacHale's first MORPHEUS ROAD story, and can't wait to find out what will happen next! Reviewed by: Joan Stradling

Review from The Neverending Shelf

Published by Thriftbooks.com User , 11 years ago
The Light is an intense and down right creepy beginning to an exciting new series. From the get go, I knew this book was going to creep me out. Just look at the cover. This character screams "I am uber creepy. You better fear me." So it was no surprise to me when the first real scary / suspenseful scene occurred early on in the novel and that I was on the edge of my seat the whole time... with every little twist and suspenseful bump making me want to hide under the covers. From that scene alone, I knew this was going to be one of those novels that I had to either read in the daylight or at least a few hours before sleep. Now before you get thinking that this book is going to be way too scary for you, I must admit that 1.) I scare pretty easily and 2.) The novel's two scariest scenes (in my opinion) are in the beginning of the novel. The rest of the novel is more suspenseful and mystery based with a few creepy scenes mixed in. Despite the creepy and scary factor involved, I really enjoyed the novel. The Light is an action packed read that kept me on the edge of my seat. It seemed like the pages flew by as I tried to say one step ahead of Marshall and his mystery. The characters in the novel were quite interesting to me. Marshall reacts in a manner very similar to how I think I would, so his character was very easy to relate to. And while Marshall's character did not have as much character growth as I was hoping for, I realize that this is the first novel in a series so it is possible that readers will see the needed growth in one of the next novels. The secondary characters of Sydney and Cooper were a lot of fun to read about. Sydney is a tough on the outside character. She is sassy, and at times, hilarious. Her character was a wonderful foil to Marshall, and the two of them together made this book an exciting read. The Light, thankfully, has enough scary / creepy moments to satisfy the horror fans, but not too much to turn off other readers like myself who tend to get scared really easily. The creepiness that MacHale has created sets the mood in the novel perfectly. The Light is a suspenseful gem by giving the reader plenty of little twists. And while every question is not answered or at least mostly explored by the end of the novel, the ending will definitely have readers craving more.

Been waiting for this one!

Published by Thriftbooks.com User , 11 years ago
I have been waiting for Morpheus road for a while now. It did not disappoint. As much as I loved the Pendragon Books, I think I like this new book even more. I thought it got down right scary/creepy in places. Marshall Seaver is another of D.J. MacHale's great young characters. I loved the book and I am far from a yougnster.

I have seen the light, and it's Morpheus Road! Awesome story!

Published by Thriftbooks.com User , 11 years ago
I love this story! Pendragon was awesome, so I had high hopes for this book. D.J.MacHale has done it again. It's not what I expected, but that's what I loved about it. The characters were so well developed, I felt like they were real teenagers from real life, or someone I'd meet at my school or something. Absolutely perfect. The story was thrilling, chilling, with action, suspense, dealings of the supernatural, drama, everything a book needs! I can't wait for the next book!
Copyright © 2020 Thriftbooks.com Terms of Use | Privacy Policy | Do Not Sell My Personal Information | Accessibility Statement
ThriftBooks® and the ThriftBooks® logo are registered trademarks of Thrift Books Global, LLC