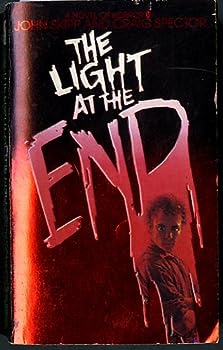 The Light at the End

by Craig Spector and John Skipp

An adrenaline-charged tale of unrelenting suspense that sparks with raw and savage energy... The newspapers scream out headlines that spark terror across the city. Ten murders on the New York City... This description may be from another edition of this product.

Published by Thriftbooks.com User , 20 years ago
First off, if you are sick of the Anne Rice vampires who have a cheesy accent, and whine and complain about the "dark gift" of being a vampire, then this book is for you. The vampire in this book is anything but whiny. However, if you like your vampire books with a ruthless vampire that kills without compassion, morals, or even a second thought, then this book is for you. Skipp and Spector have a very strong writing style. Strong in that this is a real page turner filled with violence and gore around every turn. For example, just wait till you read what happens in a movie theater.This book is pretty much out of print. I was lucky enough to find my copy at a used bookstore. I urge you to go out and hunt for this book. I can promise you that you won't be sorry.If you like your vampires to kill without reason, then you have to start this book. You'll love every page. That I can promise you.

Kudos to Stealth Press for bringing this one back!

Published by Thriftbooks.com User , 21 years ago
You know you're getting older when all your favorite songs are labeled oldies, the sports figures you admired are playing in "Old Timers Day" games, and some of the books you've read are now considered "classics." It's distressing to realize you're not immune to the passage of time, and also that your prior perceptions about what was worthwhile might have been misguided, if not outright wrong. The flip side of this particular coin is rereading the favorites of your youth and finding that they still stand up. In recent years I've had that experience with many of Stephen King's earlier works. This past spring, I experienced it with the new Stealth Press hardcover reprint of Craig Skipp and John Spector's The Light At The End. For those of you who aren't familiar with this work, a brief summary is in order. The book focuses on two characters, punk/goth vampire Rudy Pasko, and the man who has vowed to kill him, the aptly named Joseph Hunter. Rudy, a jerk and a loser in life, gains his vampiric powers by being in the wrong place at the wrong time, stumbling upon a grisly subway massacre perpetrated by an evil ancient entity. Sired merely to amuse that entity, Rudy starts to groove on his new powers, using them to push back against a world he's always hated. The massacre, coupled with Rudy's high profile activities, brings him to the attention of Hunter, a hulking, gruff, compulsive do-gooder looking for something to hit after the death of his beloved mother. Their anger brings them into conflict, and also drives the horrific events to come. And they are horrific, even if they seem a little tamer to me due to the passage of time and to changes in my perception of what should be labeled "extreme." In 1986 The Light at the End stood at the center of the then-raging debate of splatterpunk v. quiet horror (thank goodness we all realized the genre was big enough to include works from all points in the spectrum -- now if we could only stop talking about whether horror is dead, thriving, comatose or irrelevant). Skipp and Spector, striding through the horror community like the rock stars they emulated, championed a more visceral, high energy, in-your-face kind of horror than that to which we were accustomed, pushing out at the boundaries. They had their progenitors of course: folks like Robert Bloch, Stephen King, Richard Laymon, Jack Ketchum and the young upstart Clive Barker (whose "The Midnight Meat Train" seems to have inspired Light's grisly opening sequence). This book, considered with works such as S. P. Somtow's Vampire Junction, seems in hindsight to have been almost a seminal influence on later writers. One could make the case that the stylish Light made splatterpunk more acceptable, paving the way for writers as diverse as David Schow, Nancy Collins, Poppy Z. Brite, Christopher Golden, Ray Garton, Rex Miller and Edward Lee, giving them permission to go over the top in their own writing (although, in Garton's case, it may just have validated over th

In your Face Horror by Craig Spector

Published by Thriftbooks.com User , 22 years ago
"The Light at the End" is vampire horror at it's best. This novel is slick and sophisticated, written for an audience that is no longer satisfied with being spoon fed the same old plot. Fortunately, this novel has been re-released only recently in hardcover by a new press Stealth Press. (www.stealthpress.com). Finally this classic is again in print. New York is the type of city that anything can happen in. In this novel, we are taken into the world of "what if" when an old world vampire comes to see the sites and leaves the city with a legacy of it's own in the form of a nihilistic young artist turned vampire, with an ax to grind. This novel steps out of the splatterpunk stereotype with it's gritty and realistic characters and a willingness to take chances with plot and its readers. There is no neat and tidy package from this author- he takes the story around with a realistic unpredictability and a tangible sense of fear. Bloody, yes, but the violence is not the star of this novel by far. Read it for the plot. Read it for the intense, razor sharp writing style, just don't expect to put it down.

Published by Thriftbooks.com User , 22 years ago
This book was suggested to me by a friend who said it was the scariest book he'd ever read. I kid you not, this book was creepy! Besides it's scary side, it has incredible detail and descriptions, a great, flowing storyline, and characters that you can picture vividly in your head. This is, quite easily, one of the best books I've ever read. I highly recommend it to anyone who likes vampires, horror novels, or likes to be scared. You'll jump and gasp with every turn of the page!

The greatest vampire story ever!

Published by Thriftbooks.com User , 24 years ago
Skipp and Spector incredibly combine a character driven thriller with cutting edge hack and slash horror. Their take take on vampires, realistic rather than romantic, provides for a terrifyingly believable plot. The characters are endearing, so much so I found myself attatched. This adds to the suppense of who lives and who dies. {with this one you never know} This is one of the few books I can read over and over. It inspired me to go back to the typewriter. For scarier try The Bridge, skipp and spector For a near religeous experience try Animals, skipp and spector
Trustpilot
Copyright © 2022 Thriftbooks.com Terms of Use | Privacy Policy | Do Not Sell or Share My Personal Information | Accessibility Statement
ThriftBooks® and the ThriftBooks® logo are registered trademarks of Thrift Books Global, LLC