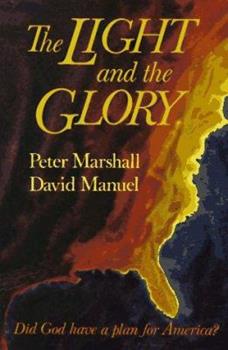 The Light and the Glory: Did God Have a Plan for America?

(Book #1 in the The Light and the Glory Series)

The Light and the Glory answers these questions, and many, many more. As we look at our nation's history from God's point of view, we begin to have an idea of how much we owe a very few -- and how much is still at stake. Peter Marshall conducts a traveling and speaking ministry in various churches across America. A graduate of Yale University and Princeton Theological Seminary, he formerly served as pastor of the East Dennis Community Church on Cape...

Published by Randall H , 1 year ago
So, you think you know America's history? Manuel and Marshall researched the information for this book from the Yale library which presents a very different beginning of this young nation than what is vogue in recent months. More specifically, the time covered is pre-colonial and right up to the Revolutionary period. This is not curious but trivial data. The book presents historical events and thinking that impact us today.

Published by Truth of history , 3 years ago
Every school should have these to study ... elementary to college! Be enlightened...

Published by Thriftbooks.com User , 12 years ago
Marshall's "The Light & the Glory" is simply the best book on American History that I have ever read. All high school students should be required to read this book. I can hardly wait to read the two following books.

Published by Thriftbooks.com User , 13 years ago
I am a graduate student in counseling at a large university. It is refreshing to read the truth about the "Christian" beginnings of America. Many of today's authors (especially in the field of counseling) either noticeably ignore or write in a tone of hate when they discuss the well-known role of Christianity in the founding of America. Authors Marshall and Manuel do a wonderful job in reminding us all that it is God who was the Author of this country.

Published by Thriftbooks.com User , 19 years ago
Authors Peter Marshall and David Manuel admit from the beginning that they are not really writing a history book exactly. They are giving what they perceive as historical examples of America being a Christian Nation guided by God to fulfill its destiny in God's plan as a Puritan City on A Hill or a New Israel. Millions of Americans both past and present have believed in such a destiny and these authors present this view well. Are they biased? Yes. But not anymore than Marxist, revisionist, feminist, or multi-cultural historians. My advice is read history from several viewpoints as you search for the truth. Try to avoid that inevitable destination to which we all finally find rest, comfort, and joy--self-righteous smugness and arrogant certainty. I think their book is targeted for a mostly teenage audience to impress impressionable minds, but adults can read it and not insulted intellectually. It just seems a bit simplistic at times when compared to other histories I've read. The authors begin with Christopher Columbus's voyage to America. They mention Columbus's belief that he was destined to find a land in which he would bring the light of Christianity to the heathen. (A more cynical interpretation would be that Columbus was merely a conquerer imposing his religious beliefs on the native subjects, but the authors are not taking that route.) Strange incidences are mentioned in which Columbus chose the lot among about 30 men to go on a pilgramage more than once during storms which threaten to sink the ship. This lot-choosing for taking a pilgramage to a shrine was seen as a way of appeasing the Lord. In fact, the authors use incidences in history as examples of God's providence or testing, or the devil's meddling or tempting the people of God to choose right or wrong. Storms such as natural events often don't happen by mere chance according to the authors, especially during some important historical event that is affected by that natural event. I thought the authors covered the Puritan leaders really well. John Winthop was a particularly important figure in American history because he was largely responsible for successfully starting and leading the Puritan colony and making it a success. He made everyone, gentlemen or not, roll up their sleeves and get to work on building the colony. This colony is contrasted with the struggling colony in Virginia which was harmed by bad leadership. Kudos to God and blame to sinners is given along the way. I got the impression that the Puritan Roger Williams was a character. He wanted to be really, really, really pure before the eyes of God. So much so that he even became an annoyance even to the Puritans. When they tried to correct the error of his fanatical ways, he would always resort to the argument that they were violating his freedom of conscience. He could always brilliantly reason his way out of being reproved. Finally, he went off to Rhode Island to a colony of people who were dissidents bordering o

Published by Thriftbooks.com User , 22 years ago
Did God have a plan for America? That is the question the authors tried to answer and its a question many of us have asked? Was the discovery of the new world chance or was there a Divine purpose behind it? The Light and the Glory highlights the coming of the Light of Christ to the new world in an extraordinary way - through faithful but sinful people. Yes, sinful people founded this country but they were a people faithful to achnowledge their own sins and quick to repent. God used these people - ordinary people - to do HIS work of planting a new Israel. Marshall and Manuel do a wonderful job of addressing how God used the early explorers' and settlers' faithfulness to plant the Light of Christ in the New World. They show how through convenant obedience with God the great discoveries were made and settlements were started. They showed how men lived in both a vertical covenant with God and a horizontal covenant with their neighbors. "Love one another as I have love you" was their guide. They also showed how self-love and breaking the covenant relationship between themselves and God and their neighbors brought hardship and death upon the settlers to the New World. For example Jamestown.They showed the Divine hand of God orchestrating and guiding a vast group of individuals with one heart into a fledgling nation. How Washington was preserved for a great calling during the Indian wars of 1755 because of his own covenant relationship. Later they highlighted the coming to gether of the continental army at Valley Forge. Entering for the winter, they were a defeated group of rag tag soldiers ready to collapse. When they left six months later, they were a united, devoted group of men fighting for a common cause under the covenant banner of relationship. United with God and with each other an Army that never truely won a battle before Valley Forge, never lost one after.The Light and the Glory is a powerful look at American history so often neglected today. The History of God in America.Thank you Peter Marshall and David Manuel for showing us the LIGHT once again!

Published by Thriftbooks.com User , 23 years ago
This book deals with how God was involved in the founding of America and how she developed. These authors did their homework. They brought out diary accounts and anything relevant and wove them into a easy to read and enjoyable story-type format. I'm not a history buff, but I could not put this one down. They made a compelling case for God's involvement in the founding of America, why some attempts to establish colonies failed because of the motives of founders and His miraculous hand in the lives of those who would honor Him. If high school text books had been this enjoyable to read and had showed history as more than a set of unrelated facts, I might have been a better student. A must read.
Trustpilot
Copyright © 2022 Thriftbooks.com Terms of Use | Privacy Policy | Do Not Sell or Share My Personal Information | Accessibility Statement
ThriftBooks® and the ThriftBooks® logo are registered trademarks of Thrift Books Global, LLC