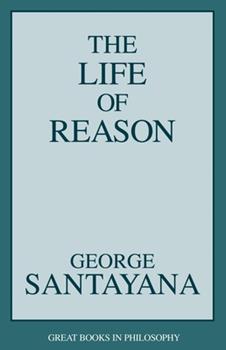 Comparing the lived world with the ideal world, noted American philosophical naturalist, poet, and literary critic George Santayana (1863-1952) seeks in this influential compilation of his earlier works to outline the ancient ideal of a well-ordered life, one in which reason is the organizing force that recognizes the need to allocate science, religion, art, social concerns, and practical wisdom their proper role and appropriate emphasis within the...

The Condition of Children and Barbarians

Published by Thriftbooks.com User , 15 years ago
George Santayana "Progress ... depends on retentiveness. When change is absolute ... and when experience is not retained ... infancy is perpetual. Those who cannot remember the past are condemned to repeat it. In the first stage of life the mind is frivolous and easily distracted, it misses progress by failing in consecutiveness and persistence. This is the condition of children and barbarians..."

Published by Thriftbooks.com User , 15 years ago
I discovered Santayana at the Little Given's Bookstore in Lynchburg VA. I have the 1936 edition of The Philosophy of Santayana, Selections from His Complete Works, edited by Irwin Edman. The owner of the book was Richard C. Rowland, a college professor (English/Philosophy)--I presume this, for I did a Google search and found his obituary. He taught at Sweet Briar College, which would make sense that his book would make it to Lynchburg. I was unfamiliar with Santayana, and I'm not sure why I picked up this volume, but I did to my continuing delight. From every page the prose could be picked up at any point and be so poetic, elegant and lush--like being enfolded in the arms of a lover from whom you would never wish to disentangle. In my view, and certainly to my sensibilities, Santayana's views on religion are well worth reading despite the negative comment posted by another reviewer. Santayana understands well the importance of religion and is very deferential to the symbology and idealism on which it rests. The sheer magnitude of "stand alone" phrases whose cogency and poetry leave any of us who value the written/spoken word jealous. Even more so as English was his second language. Santayana notes that "Matters of religion should never be matters of controversy. We neither argue with a lover about his taste, nor condemn him, if we are just, for knowing so human a passion. That he harbours it is no indication of a want of sanity on his part in other matters. But while we acquiesce in his experience, and are glad he has it, we need no arguments to dissuade us from sharing it, Each man may have his own loves, but the object in each case is different. And so it is, or should be, in religion." So do get The Life of Reason for no other reason than to envelope yourself in the exquisite prose and impress your friends with your erudition to have such a book from which you can open and quote a passage that will certainly delight the ear and provoke conversation. That is the gift of Santayana, and one you will revel in receiving. And...take this book, or any book that you lovingly own and mark the passages that provoke your passions, so that when it goes to another owner they can enjoy your insights and share in your enjoyment or provocation--for that is a priceless legacy of one book lover to another, don't you think?

Politically incorrect but much more

Published by Thriftbooks.com User , 15 years ago
I am curious if anybody that is politically correct has read enough of this classic to condemn Santayana for his comments on women and blacks. There is a brief reference to blacks that I believe would get him fired at most colleges today, and more comments on women that would at least get him in very hot water. Certainly if he were alive today he would revise his thinking. But the hostile reaction to the President of Harvard recently when he was unwise enough to answer a request to explain in lecture, 'why are there not more women leaders in science'...suggests that Santayana might get in hot water today even if he changed to more modern views. The Harvard President's nightmare and similar politics suggests that America suffers from a resurgence of the sadistic Christian mentality that Santayana cites as similar to Islamic fundamentalism in his "Wind's of Doctrine" essay 'THE GENTEEL TRADITION IN AMERICAN PHILOSOPHY'. Calvinism, Sin exists, sin must be punished. I get a little lost in much of Santayana's writing style sometimes but his overall outlook makes him my favorite philosopher.

Published by Thriftbooks.com User , 22 years ago
In a century in which philosophy has been taken over by pedants eager to "analyze" every technical problem ever devised by the perverted ingenuity of the mind of man--technical problems, moreover, which, as Santayana himself once put it, are "solved best by not raising them"--it is comforting to know that at least one major philosopher never forgot what philosophy is really all about: namely, wisdom and love of knowledge. Whereas other philosophers seek to impress by being original or controversial or obscure, Santayana merely attempts to describe things as they are. Santayana is above all a realist, not merely in the philosophical sense of believing that external objects exist outside of man's consciousness, but also in the more general sense of accepting the world as it really is and not as we might wish it could be. So many philosophers seem motivated primarily by a desire to rationalize away the disagreeable aspects of reality. Santayana's approach is different. While recognizing that reality has its disagreeable elements (Santayana was certainly no optimist), he seeks to distinguish, as he once put it, the part of this disagreeable or mixed reality "that could be loved and chosen from the reminder." In "The Life of Reason," Santayana sought to explain how reason emerges in five separate areas of human existence: thought, society, religion, art and science. Originally, Santayana devoted one book to each subject. In this present edition, all five books have been abridged by the author and made into a single volume. The unabridged version is superior to this one. The abridged version is more difficult to follow, because in the process of condensing five books into one, gaps have been created in the exposition of Santayana's thought. Unfortunately, the original five volume edition is no longer in print.The best two volumes of the unabridged version were "Reason in Common Sense" and "Reason in Religion." The first of these books shows how men came to discover the external reality of nature and the independent existence of other minds. There are chapters on how thought is practical, on the "malicious psychology" of philosophers like Kant, Hume and Berkeley, on how thought is practical, and on Santayana's contention that ideas are not abstractions. "Reason in Religion" is one of the most interesting books on religion ever published and ought to be read by every atheist and agonistic who regards religion as a mere tissue of delusion and irrationality. Santayana, while denying the literal truth of religion, contends that religion nonetheless represents a sort of poetic and moral truth expressed in symbols that can be grasped on a very human level. "Religion remains an imaginative achievement, a symbolic representation of moral reality which may have a most important function in vitalising the mind and in transmitting, by way of parables, the lessons of experience."The over-riding theme of "The

Published by Thriftbooks.com User , 23 years ago
The Life of Reason is a marvelously executed, exceptionally elegant philosophical tour de force. Santayana refuses to be blinded by prejudicial notions and founds his philosophical hermeneutic on common-sense, logic, and probability. One reviewer here has noted that Santayana takes a myopic perspective on religion. Frankly, this is baffling. Santayana believes that religion is a kind of species of literature and that we should not look to it for scientific insights. In contrast, he believes that religion, in the abstract, has, as all belief systems do, a rational framework, so to speak. In addition to this, Santayana finds much about theology and religious ritual, more aesthetically speaking, intriguing. This is hardly a one-sided view. The Life of Reason will not interest those attracted to the turgid obfuscatory mutterings of Heidegger, postmodernist critics, and other related thinkers. It will appeal though to those interested in analytic philosophy, logic, and scientific skepticism. A wonderful book.
Trustpilot
Copyright © 2022 Thriftbooks.com Terms of Use | Privacy Policy | Do Not Sell or Share My Personal Information | Accessibility Statement
ThriftBooks® and the ThriftBooks® logo are registered trademarks of Thrift Books Global, LLC