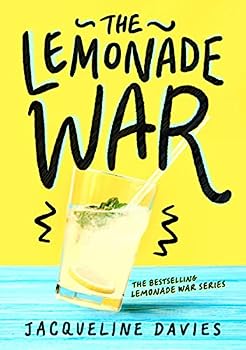 (Book #1 in the The Lemonade War Series)

Here is a clever blend of humor, math wizardry, and business know-how. As it captures the one-of-a-kind bond between brother and sister, this poignant novel also subtly explores how arguments can... This description may be from another edition of this product.

Published by Thriftbooks.com User , 13 years ago
This would be a great book for cross curricular work in math and literature in upper elementary classrooms. A fun read with lots of great material to work with.

Published by Thriftbooks.com User , 14 years ago
I've got a sister just like Jessie, but I'm the smarter one, and we can both understand feelings. We're both misers, (Nora a little bit more), But she likes lemonade stands way more. I really liked how they both sabotaged each other's money to become the winner of the Lemonade War. I can also relate, because I play with Nora a lot, but if I found she was being promoted from 3rd to 5th, I would be the same as Evan. Jacqueline Davies sure can write a story about a conflict between a brother and a brother. Even though it was 3rd person writing, she sure can write it from a kid's perspective! This is a really good book, some people might say as good as Harry Potter and the Deathly Hallows (Book 7)(a really good book), or all the Harry Potter Books. Kids (and even grownups) of all ages will like this book. I recommend this book to everyone who reads this, because I know you'll like it! Daniel Glenn Leonard 10 years old

Outstanding choice--and bring the author to your school!

Published by Thriftbooks.com User , 14 years ago
My son's third-grade teacher is reading this book aloud to the class. He loves it so much he wants a copy of his own! It's an honest, apt depiction of children's real emotions and behaviors. Like Beverly Cleary, Ms. Davies does not try to sugarcoat kids' anger, fears, and how those can be acted out. Children clearly recognize and respond to this. Out school also had the pleasure of bringing Ms. Davies in for an author visit. She made a real connection with the kids at all different grade levels, and won high praise from the teachers and school librarians! She has written other wonderful books, for pre-school through elementary.

Published by Thriftbooks.com User , 15 years ago
An excellent children's book aimed for kids aged nine through eleven. Rivalry and fighting between brother and sister of who can make $100 by doing lemonade stands during summer break. A humorous and fresh realistic fiction story. Something that all siblings can relate to. A great read!

Published by Thriftbooks.com User , 15 years ago
I am about to describe to you a true situation that I have experienced time and time again as a children's librarian. A parent will walk up to me and ask for a work of fiction for kids dealing either with money or business. Money or business. This request is usually met with a blank stare on my part followed by a furious search of the library's catalog. Let's see . . . money . . . money . . . Well there's that graphic novel version of "Rich Dad, Poor Dad," for kids, but that's not really fiction. If you work in your own children's room then you may know that nine times out of ten the answer to this kind of query will have to be, The Toothpaste Millionaire by Jean Merrill. I mean, face it. When was the last time any book for children dealt with finances in a format that was fun, readable, and contained halfway decent writing? Well, when I heard about "The Lemonade War" I thought my prayers had been answered. Then I read it and realized I'd been thinking about the title all wrong. I thought it would just be this lightweight bit of fluff with some business info for the kiddies on the side. Instead, the book delivers emotional punch after emotional punch. It resonates with the reader. Pulls you deep inside its story and doesn't let go once. This is the first fictional children's novel by author Jacqueline Davies. And you can bet that if she writes another, I'll be first in line to buy. Before the letter came, siblings Evan and Jessie got along just fine. She's just a second grader and Evan's going into the fourth, but they always helped one another out. Being exceptionally smart, Jessie would help Evan figure out stuff like how to make the ultimate lemonade stand. In return, her big brother would help her deal with some of the complexities of understanding kids her own age. Then came the letter and everything changed. Jessie's going to skip a grade and be in Evan's class next year and the boy is mortified. It's bad enough having a little sister who makes you look dumb at home, since she's a certified genius and all. Now imagine how much worse it would be at school where all your friends could see smart she was compared to how dumb you are. Now Evan's rejected Jessie completely and she's bewildered and hurt. She was hoping he'd help her make some friends in the coming year. When it's clear that that's not going to happen, though, betrayal turns to anger. Before they know it, the two kids are locked in a battle to determine who can sell the most lemonade by the end of the summer. Evan's doing it to show that he can beat Jessie in something. Jessie's doing it to win back Evan's respect. And neither of them have any idea how out-of-hand the whole business is going to get for the next few days. Business tips and math problems chart the course of the competition. I made the big big mistake of reading the beginning of J.L. Bell's review of this book prior to reading it myself. My rule when reviewing a book is to never ever
Trustpilot
Copyright © 2022 Thriftbooks.com Terms of Use | Privacy Policy | Do Not Sell My Personal Information | Cookie Preferences | Accessibility Statement
ThriftBooks® and the ThriftBooks® logo are registered trademarks of Thrift Books Global, LLC