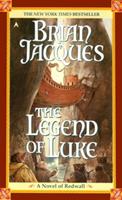 The Legend of Luke

New York Times bestselling author Brian Jacques gives us another tales of Redwall, filled with "The Knights of the Round Table with paws" ( The Sunday Times) along with their friends and enemies. Redwall's most valiant champion, Martin the Warrior, embarks on a perilous journey to the northland shore to trace his heroic legacy: the legendary exploits of his father Luke...

not the best Redwall book

Published by jezz_ca , 11 months ago
Our family is a big fan of Redwall. We love the characters, the adventure, the magic, but most of all the feasts. However this book was a huge disappointment. Martin goes on a quest to discover his family history. As would be expected, the journey is filled with challenges and meeting new friends and foes. However Martin's quest feels completely random and falls flat. Within Martin's story is the Legend of Luke which is an excellent tale in itself.

Newest Redwall Novel a legend in the making

Published by Thriftbooks.com User , 22 years ago
The Legend of Luke by Brian Jacques On a misty summer morning, a stranger arrives at the Redwall Abbey. However, as soon as Trimp the Hedgehog enters the Abbey, she immediately causes a commotion. As she works in the fields, she sings the song of her homeland, little does she know she sings of Luke the Warrior, father of the Redwall hero Martin. Martin, having never known his warrior father, is filled with curiosity and wonder. He must know more, and eventually he, Gonff the prince of mouse thieves, and Trimp, travel to the North shores to uncover the secret of Luke the Warrior. Little do they know what legend they will uncover. In this thrilling saga of the Redwall Series ( It takes place chronologically after Mossflower and before Redwall ), Brian Jacques once again mixes animal life into a medieval fairy tale. He descriptively paints a tapestry into your mind to make you feel every as if you were actually there. He holds you in suspense and wonder until it's over. In my personal opinion I enjoyed the book. After a slow start, it immediately picks up. The vivid description lets you use your imagination to no end. The battle strategy and plot was astounding, and the character development was terrific. I recommend this book to everyone who enjoys adventure, and anyone who has an imagination.

What a great book!

Published by Thriftbooks.com User , 22 years ago
In the beginning of The Legend of Luke, Martin the Warrior, Gonff Prince of Mousethieves, Dinny Foremole, and Trimp the Hedgehog travel to the Northland Cliffs in search of anything that would help Martin discover what happened to his father, Luke. Along the way they find many friends and foes, including an otter named Folgrim, the Guosim Shrews, a tribe of Dunehogs (Hedgehogs), a small squirrel named Chugger, and a funny group of vermin lead by a fox.After Martin finds members of his fathers old crew, the story really begins. Vilu Daskar has just smashed Luke's tribe on the Cliffs, and has killed Luke's wife, Sayna. Luke vows to get revenge, and to settle the score with his arch enemie, Vilu. Luke evenually gets his paws on a ship, and with a small crew, takes off after Vilu and his slaveship, the Goreleech. To make a long and great story short, Vilu Daskar and his vermin die, unfortunatly, as does Luke. But knowing that his father was ever the warrior, and that he stood true to his promise and got revenge, Martin travels home to Redwall with a great weight lifted from his shoulders.The Legend of Luke really deserves more than 5 stars, and is the best Redwall book (in my humble oppinion). Brian Jacques really is a great writer, and deserving of every bit of praise that he gets.

Published by Thriftbooks.com User , 22 years ago
This book is a must-read! It's about how Martin travels to the northlands to find out what happened to his father, Luke the Warrior. Vilu Daskar is not a very nice stoat! He abused his crew, once having some of them whipped then doused in salt water. Ouch! Luke is always after Daskar in his tiny vessel, the Sayna, named after Martin's mother. Beau the hare is so funny, his whole crew is. This book is filled with the usual action, adventure, and sadness that is in all the other Redwall books. It has a very sad ending. Sad, but extremely heroic. To those of you that have read it, you know what I mean! And Ranguvar Foeseeker the squirrel warrior, whoa... she's cool! She's one of the most savage warriors in the whole series!You learn lots of secrets too, like about how Saint Ninian's was built, how the tapestry was made, and all that stuff!

The best book yet!

Published by Thriftbooks.com User , 22 years ago
This is most definately the best Redwall book Brian Jacques has written yet! This is for all of us who were dissapointed that none of his books since Martin the Warriar and Mossflower were about Martin. This book has all of your favorite characters from Mossflower; Martin, Gnoff, Bella and more!Martin leaves Redwall with a small entourage; Gonff (of course), and a few other friends, to try to find what happened to his father, Luke. READ THIS BOOK!

So your kids have read all the Harry Potter books...

Published by Thriftbooks.com User , 22 years ago
... now try Brian Jacques. The Redwall series combines exquisite writing, memorable characters, and suspenseful story-lines. Like Mr. Ostby (see below), I read this novel to my children and wow, were they entertained. I kept pushing back their bedtime because I didn't want to stop reading! The best compliment I can pay Mr. Jacques is to relay a comment my five year-old, Elizabeth, made after I read the final sentence: "Start over!"
Trustpilot
Copyright © 2022 Thriftbooks.com Terms of Use | Privacy Policy | Do Not Sell or Share My Personal Information | Accessibility Statement
ThriftBooks® and the ThriftBooks® logo are registered trademarks of Thrift Books Global, LLC