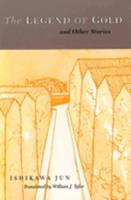 Ishikawa: The Legend of Gold Paper

The four stories and novella translated in this volume represent the best short fiction by Ishikawa Jun (1899-1987), one of the most important modernist writers to appear on the Japanese literary stage during the years before and after World War II. Throughout his career, Ishikawa resisted the tide of popular opinion to address issues of political and artistic significance and thereby paved the way for a generation of Japanese internationalists and...

Published by Thriftbooks.com User , 17 years ago
Ishikawa Jun is an author largely unknown in the west, and it is regrettable that his anti-war literature has gone mostly unnoticed outside of Japan. From Mars' Song, a blistering attack of a "war without wisdom" to the Legend of Gold, a snapshot of the dreams and disappointments in the immediate post-war period, and finally the Raptor, a surreal look at the new peace in post-Occupation Japan, this collection of stories is a penetrating look at a controversial and tumultuous period in modern Japanese history. Discussion of literature in wartime and immediate post-war Japan often centers on figures such as Kawabata and Mishima, but Ishikawa's gift for combining brazenness with subtlety added to his uncompromising resistance to the Japanese war machine makes his tales important additions to the canon of Japanese literature.
Trustpilot
Copyright © 2022 Thriftbooks.com Terms of Use | Privacy Policy | Do Not Sell or Share My Personal Information | Accessibility Statement
ThriftBooks® and the ThriftBooks® logo are registered trademarks of Thrift Books Global, LLC