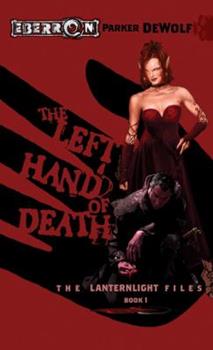 The Left Hand of Death: The Lanternlight Files, Book 1

(Part of the Eberron Series and The Lanternlight Files (#1) Series)

In the dark and dangerous streets of Sharn, Eberron's City of Towers, a troubleshooter gets more than he had bargained for when he finds himself in possession of a strange relic and is hired by a mysterious woman to find a potent--and deadly--magic weapon. Original.

Published by Thriftbooks.com User , 14 years ago
Sometimes, you can tell an author had just seen a movie or read a book and asked himself: "How can I adapt this plot into a new story I can tell?" Some people call this plagiarism, while others swear on the validity of "tribute" art (just look at the success of ETAs -- Elvis Tribute Artists). If you had told be that a piece of fantasy-themed tribute prose based on Daschiell Hammett's classic "the Maltese Falcon" (and the film of the same name) would ever make its way onto my bookshelf, I'd have said you're crazy. But it did. And I liked it. Let me explain. Parker De Wolf's novel is not such a transparent "port" of the "Falcon" to Wizards of the Coast's Eberron setting; it actually requires a little bit of paying attention to themes, reversals and strategies that Hammett pioneered with Sam Spade (not having the book directly in front of me makes it hard to cite specific examples). A red-haired elf takes the place of O'Shaughnessy and, while there is no Joel Ciaro to be found, it's hard to imagine the chief villain without picturing (and reading his lines as) Sydney Greenstreet. Mr. De Wolf does the original justice, with well thought out applications of typical literary devices of the noir genre mixed in with some more recent, adult-oriented additions to noir canon (such as drug abuse and addiction). If Mr. De Wolf has a flaw in what would otherwise be an excellent noir fantasy classic, it is in not cleaving closely enough to the pulp noir style in his written vernacular as well as in his material. Too often, it seems, Mr. De Wolf choses to use the language of a fantasy author instead of that of a pulp novelist; if he had done the genre justice in this regard, he would have made his tribute piece more than a tribute, it would be a testament. I've read a few of the Eberron novels and have been pleasantly surprised at what I've found. I generally detest most fantasy as being far too sappy and florid for me -- this is a flaw that few Eberron books possess. Each Eberron novel I've read, I've read at least one sequel to, but usually just because I'd read the previous novel and was interested to see how things played out. With The Left Hand of Death, Parker De Wolf has made me look forward to another Eberron novel, not to see what will happen to his characters next, but to see how much more he, as an author, can do.
Copyright © 2022 Thriftbooks.com Terms of Use | Privacy Policy | Do Not Sell My Personal Information | Accessibility Statement
ThriftBooks® and the ThriftBooks® logo are registered trademarks of Thrift Books Global, LLC