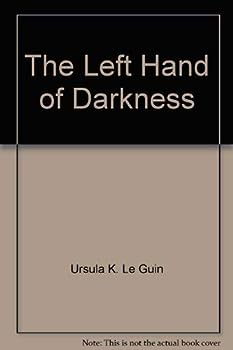 The Left Hand of Darkness

(Book #4 in the Hainish Cycle Series)

When The Left Hand of Darkness first appeared in 1969, the original jacket copy read, Once in a long while a whole new world is created for us. Such worlds are Middle Earth, Dune - and such a world is Winter. Twenty-five years and a Hugo and Nebula Award later, these words remain true. In Winter, or Gethen, Ursula K. Le Guin has created a fully realized planet and people. But Gethen society is more than merely a fascinating creation. The concept of...

Published by Thriftbooks.com User , 4 years ago
Despite the listing, Neil Gaiman did not co-author this book. He was only 9 when it came out.

Published by Thriftbooks.com User , 5 years ago
This book came into my life as an unwanted suggestion, and is now my all time favorite. It is an immense novel, and wholly stunning. I recommend it to anyone with an interest in gender, politics, gender-politics, and foreign planets.

I just read it- I didn't know it was famous

Published by Thriftbooks.com User , 15 years ago
The story of human civilization out in the future, sprawled across the cosmos and actually doing quite a bit better than most of us anticipated. There is one unique little world out on the fringe of everything, weather included, called Winter. It is the Siberia of planets, and the people are tough as nails with the little quirk of being kind of hermaphroditic. This is the story of an Observer who becomes involved in the life and politics of the planet, and is a study of human nature, of affection, of emotional paralysis, of tragedy. Science fiction is the backdrop used to make a study of human nature at once more vivid and less biased. It is flawlessly written, and while it is sometimes slow for the 21st century eye, it is a classic example of still waters running deep. And like many agnostics, Le Guin thinks more about God and eternity than most religious people, never hiding her inverted doubts that maybe there is a God, and allowing this undercurrent of uncertainty to play out in the book. Again, it is a masterful book, but it is not likely to be made into a video game any time soon.

Beautiful, if not quite perfect

Published by Thriftbooks.com User , 16 years ago
I don't think it's necessary to resort to hyperbole when describing this book. In a word, it's beautiful. The language is intricate and delicate, as is the structure of the novel, the careful building of a mythology and culture from the ground up. The fact that it's a relatively short book is a reflection on Ursula Le Guin's formidable power as a writer: what she accomplishes in a short space is rarely seen in a much larger and weightier novel. Perhaps the most striking thing about it is the apparent ease with which legend is woven into the fabric of the story, so that the world and its people reveal themselves slowly and naturally to the reader. This many-threaded structure allows the reader to draw conclusions from mere hints, relating the obscure myths to the concrete story at hand. Much is implied without being stated outright, but this never obscures the story; if anything, it makes it stronger, clearer, and deeper. Every book has the odd quirk, and "The Left Hand of Darkness" isn't without its own. Although thoroughly modern in sensibilty, it was written in 1969, and in one minor way, that does show. To the modern reader, the amount of attention afforded the "unisexual" society described here feels a little bit out of proportion. Obviously our comfort with gender ambivalence and androgyny has increased over the last three or four decades; at any rate, I found no difficulty in thinking of the characters as simultaneously male and female -- it's especially easy to do when the writing is so compelling. As with many of Ursula Le Guin's other novels, the characters are a bit abstract. This is a result of the author's focus, rather than insufficient characterisation: Ursula Le Guin is definitely an ideas writer, and a language writer, rather than a character wrtiter. It's not that Genly Ai, Estraven and others are not believable; they are. It's just that Le Guin's characters are almost always created and harnessed to serve the story's ideas, rather than the other way around. The focus isn't on the life and times of an individual human being, but on the big ideas involved, and on their implications for mankind as a whole. There are virtually no attempts to dissect and examine any individual; as with the story itself, much remains hidden, hinted at, unknown. This is not an entire world, it is a single tale, woven from fragments of myth and narrative, but only the relevant ones. You come away satisfied with a beautifully crafted, intelligent, thought-provoking story -- but also, with a sense of having visited a place that keeps its secrets, with people who will keep theirs.

One of science fiction's most famous novels---a must-read

Published by Thriftbooks.com User , 19 years ago
Ursula Le Guin's Left Hand of Darkness has never been out of print since its publication. And it won major science fiction awards. With good reason...this is one book that should be making you click madly on the "buy this book" button if you haven't read it yet.The story is innovative: Genly Ai, an envoy from The Ekumen, is assigned the task of getting the planet Gethen to join with this consortium of planets. The purpose isn't trade--distances are so great that only the transmission of ideas is possible. Messages can travel great than light speed by virtue of the Ansible, a device that simultaneously transfers information.The Gethenians are unique among the sentient beings of the known planets; they are monosexual, undergoing a kind of estrus or heat once a month where they morph into female or male, completely by chance. Gethen is called Winter because it is perennially cold. The cold, and the ambiguous sexuality of the Gethenians makes for a hostile, foreign yet alluring environment. Genly Ai has allied himself with Estraven, an advisor to the King of Karhide, one of the nations on the planet of Gethen. But Estraven falls out of favor with the unstable king, and Ai is dragged into the snare of court intrigue. What started out as a peaceful mission of communication is now deadly dangerous.Ai finds himself inextricably entwined with Estraven, and the resulting adventure reads like the best science-fiction saga mixed with something like Earth's polar exploration adventures. I am not sure if the sexual device of a mostly-neuter people worked well here--supposedly Gethenians have both male and female attributes, but they seemed primarily male in the book. Nonetheless, this is one of science fiction's greatest adventures and tales of friendship and if you haven't read it, you are in for a huge treat.

An enduring classic you can read again and again

Published by Thriftbooks.com User , 20 years ago
Le Guin is a master of writing; her chosen genre is science fiction, but more with the focus of exploring man's relationship to each other than to explore future possibilities. Nevertheless, Le Guin can create new worlds and new cultures that are unsurpassed by any other science fiction author. The Left Hand of Darkness is set on Gethen, or Winter, a planet that has arctic conditions most of the year. An envoy, Ai, from the Ekumen of Worlds is sent to explore whether Gethen would join the Ekumen and engage in intellectual exchange of ideas and technology. Gethen is also unique in that the people are unisexual, changing to female or male form on a monthly cycle called kemmer. How Le Guin handles a unisex race is one of the amazing parts of the book.Ai sets out to live on Gethen, first in the country of Karhide. He attempts to convince the (somewhat mad) king of the value of joining the Ekumen, helped by a counselor of the King, Estraven. But Estraven is undermined by another court counselor and is banished, and Ai is in terrible danger and doesn't realize it. As Ai explores the rest of Gethen and its varied societies, he is helped again and again by Estraven, whom he at first mistrusts. Their heroic trek across the Ice of Gethen reads like the best arctic explorers adventure from Earth. This is an exciting book, though the beginning is slow, as Ai begins to understand the strange society of Karhide and Gethen. As the adventure unfolds, you will not be able to put the book down. This is a classic that should be read by anyone who loves science fiction, and is a book that can be re-read many times with great enjoyment.

A trek to question one's perceptions.

Published by Thriftbooks.com User , 22 years ago
This book won the 1969 Nebula Award and the 1970 Hugo Award for best science fiction novel of the year. I recall first reading this book when it first appeared and being stunned at the originality and the beauty. I have read every Hugo and Nebula winner (and most of the nominees) and this is still near the top. In this classic novel, all of the action takes place on the planet known as Gethen or Winter, a frozen world set in Le Guin's Hainish universe. All of the humanoid inhabitants of Winter are exactly the same as the humans of Earth except in the means of reproduction. They are all of a single sex and can assume either sex when in "heat." If one person of a couple becomes female, the other automatically becomes male. The culture and society of this world is shaped not only by the harsh environment but by this sexual structure. A main portion of the novel is concerned with the trek of a human ambassador and ethnologist, Genly Ai, across Winter's surface with a Getthenian. The man from Earth and the manwoman from Winter grow to know and understand each other. The novel not only raises issues about our perceptions of sex but the problems associated with cultural chauvinism. It is a book that all serious students of science fiction literature should read. For those earlier reviewers who awarded this book a low rating because it wasn't "classic" science fiction, you have to recall that psychology, sociology, and anthropology are all sciences (remember that the author's father, T. Kroeber, was the first Chairman of the Anthropology Department at U.C. Berkeley), just like physics, chemistry, or, in my case, biochemistry. And to the reviewer from Washington, D.C., (of March 3, 1999) who complained that Genly Ai was too uninteresting as the main character. Perhaps that was the point. Have you forgotten your Heisenberg?
Copyright © 2020 Thriftbooks.com Terms of Use | Privacy Policy | Do Not Sell My Personal Information | Accessibility Statement
ThriftBooks® and the ThriftBooks® logo are registered trademarks of Thrift Books Global, LLC