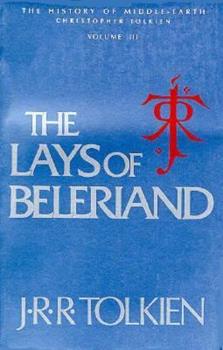 The Lays of Beleriand

(Book #3 in the The History of Middle-Earth Series)

The Lays of Beleriand are epic stories in verse form of the Elder days of Middle-earth. Contained herein is The Lay of the Children of Hurin, which tell the tale of Turin Son of Hurin and Glorund the Dragon. The Lay of Leithian tells of Thingol, of the meeting of Beren and Luthien, and of the battle between Fiingolfin and Morgoth. Together these Lays form an important backdrop to The Silmarillion, and illuminate some of the oldest tales of Middle-earth...

A real Silmaril in the making

Published by Thriftbooks.com User , 17 years ago
This is the third book in the Histories of Middle-Earth, compiled and commented on by Tolkien's son Christopher. The first two, titled The Book of Lost Tales I & II, were the earliest writings that became the Silmarillion. Their basic premise was that an Englishman named Eriol finds a lost island populated by Elves who tell him a series of stories or "Lost Tales". These were loosely divided into chapters, each ending with a few or more pages of commentary by Christopher. By the end though we learn that Tolkien is not truly satisfied with the delivery or the full content of the tales, so he embarks upon rewriting them in different styles. One style was a narrative prose that is partially covered in book IV called The Shaping of Middle-Earth and which eventually becomes the Silmarillion. He also tried them in a style of epic poetic metre, the sum of which is known as The Lays of Beleriand. Introductions aside, the book itself is divided into four major sections, beginning with the Lay of the Children of Hurin. Alas, this is probably the saddest and most tragic tale that Tolkien ever penned, and this is deepened when he translates it into verse. It should also be said here that it is written in alliterative verse meaning that at least two but usually more words have the same beginning sound. I shall give here the first seven lines that not only show you the style and how the words flow, but also they are a brief synopsis of the story itself: Lo! The golden dragon of the God of Hell, The gloom of the woods of the world now gone, The woes of Men and the weeping of Elves Fading faintly down forest pathways, Is now to tell, and the name most tearful Of Níniel the Sorrowful, and the name most sad Of Thalion's son Turin o'erthrown by fate. It continues in this style for about 2270 more lines, going through the history of Turin's father, Hurin, and how he came to be Morgoth's prisoner, doomed to helplessly watch everything that befalls his cursed children. It then details Turin being fostered by the elves of Doriath, to the tragic story of his friendship with the elf Beleg, who he accidentally slays by his own hand. The final part translated into verse is about Failivrin, and the beginnings of their tragic love for each other. It ends here, little more than half of the full tale, sadly abandoned so that he could work on other projects. The second section is only thirteen pages long, composed of a few brief starts at setting some of the earlier tales to verse. The Flight of the Noldoli details the beginning of the first kinslaying on the shores of Valinor. This is very short (146 lines) with much unreached potential. Next are 38 lines about Earendil, and then an even shorter start to the Fall of Gondolin. The Lay of Lethien, the third section of this book, is where Tolkien's heart truly was. Here we are given 4223 lines written in octosyllabic couplets (meaning that each line is made up of eight syllables) for which I

Published by Thriftbooks.com User , 20 years ago
This book of poetry is extremely beautiful and inspiring. Tolkien captures a true sense of nobility, heroism, wonder, and great and terrible deeds. The poems themselves are excellent, with finely-turned phrases, evocative imagery, and scarcely a word out of place, especially the Lay of Beren and Luthien (which, admittedly, has always been a personal favorite story with me). A must-have for any serious Tolkien fan or anyone who appreciates noble and beautiful poetry!

Contains the greatest epic poem of the 20th century

Published by Thriftbooks.com User , 21 years ago
Contrary to popular belief, this is not a book about Middle-earth. Middle-earth didn't exist when Tolkien wrote the poems contained in this book. But the legends they established were taken up into the later Middle-earth mythology even though we were only treated to glimpses of them in the years preceding the publication of this book.Lays of Beleriand unveils the true source of the Beren and Luthien story told in The Silmarillion. Although the characters predate "Lay of Leithian", Tolkien brought them forward in a radical evolutionary process which changed many things. The product of his changes was a fantastic poem which would make a wonderful book in its own right. Alas! He never finished the lay.Deemed too "Celtic" by an early reader at Allen & Unwin, the poem was set aside by Tolkien as he turned to lighter projects. And though he tried to return to it later in life, the flame had dwindled and he was unable to rekindle the ancient fire which inspired this masterpiece. The last lines of the poem seem to describe the work's own fate: "An gleam of swords in fire there flashed/the fangs of Carcharoth, and crashed/together like a trap, that tore/the hand about the wrist, and shore/through brittle bone and sinew nesh,/devouring the frail mortal flesh;/and in that cruel mouth unclean/egulfed the jewels holy sheen."A few snippets followed, disconnected from the primary narrative. All that could have been, that should have been, was lost forever, unless Tolkien is singing the final stanzas for his beloved Edith beneath the trees in a faraway paradise even now....

Only Tolkien has the linguistic skill to laud his works

Published by Thriftbooks.com User , 23 years ago
"The Lays of Beleriand" is one of my favorite books by Tolkien. It is the epitome of his poetic achievement. As the previous reviewer said, no praise formed by me would be worthy of this exquisite work. Truly, only Tolkien himself has the deep linguistic skill needed to properly laud this work. I had long loved Tolkien's prose before I read this book. But once I was exposed to his poetry, I quickly realized that he is as masterful in verse as he is in prose. Reading "Lays" was a euphoric revelation of another aspect of Tolkien's ingenius literary style. Rich, archiac language coupled with smooth-flowing meter and rhyme is employed to weave into verse the captivating tales of the star-crossed loves of Luthien Tinuviel with Beren Erchamion, and of Turin Turumbar with Neinor Niniel. The noble and deeply touching epics immerse you in their plots, engraving in memory an unforgetable image of this vastly intricate world. The verse, especially in "The Lay of Leithian", is spangled with particularly entrancing descriptions of the grandeur of Elven kingdoms long lost and the starlit enchantment of the Dancer of Doriath. These passages contain such delicate imagery presented in metaphor so elegantly phrased that they surely could entrall even Morgoth himself. Any devotee to Tolkien, and especially those who savor poetry, will be thoroughly enamoured with "The Lays of Beleriand".

Great for a fuller appreciation of Tolkien's poetic skills

Published by Thriftbooks.com User , 24 years ago
Tolkien outdid himself with these two long poems. Although never completed, these alliterative verse versions of the "Lay of the Children of Hurin" and "The Lay of Beren and Luthien" are vivid, thrilling and deeply moving. There is little different about these stories from their versions in The Silmarillion, but they are more detailed, and in VERSE. Not only do they make very enjoyable reading, but students of Old, Middle and Early Modern English poetry will be in awe of Tolkiens completely unaffected ability to render his story in alliterative verse, complete with caesura. I was very frustrated not to be able to read complete versions, but the lies of Delu Morgoth live even today, and the ends of these tales are lost in the mists of time...
Trustpilot
Copyright © 2022 Thriftbooks.com Terms of Use | Privacy Policy | Do Not Sell My Personal Information | Accessibility Statement
ThriftBooks® and the ThriftBooks® logo are registered trademarks of Thrift Books Global, LLC