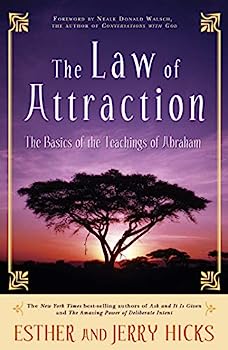 The Law of Attraction: The Basics of the Teachings of Abraham

by Jerry Hicks and Esther Hicks

This book presents the powerful basics of the original Teachings of Abraham. Within these pages, you'll learn how all things, wanted and unwanted, are brought to you by this most powerful law of the... This description may be from another edition of this product.

Published by Thriftbooks.com User , 2 years ago
I was up all night for two days in a row because my brain was addicted to the delicious words....read at your own risk! :)

The Law of Attraction Requires an Open Mind & Positive Thinking

Published by Thriftbooks.com User , 14 years ago
Back in the mid-to-late `70s, when I was still a fairly young pup, I tried my hand at wading through the works of existential guru, Carlos Castaneda. Even now, Castaneda is a powerhouse of metaphysical gems of wisdom designed to expand the mind; so I occasionally venture down memory lane and re-read all those tomes of wisdom he produced in an attempt to better understand his thought processes. For the most part, I have been successful. Yet the one thing that I still had a difficult time with until recently, was comprehending Castaneda's concept of `intention.' What was this mysterious `intention,' to which Castaneda repeatedly referred, and why couldn't I grasp it? Finally, after reading the words of Abraham in The Law of Attraction, the meaning became clear: intention is merely the process of creating, or bringing into existence, that which we desire. Simple; yet, for some reason, one of the most difficult things for most of us to comprehend, much less attain. Yet, again, it all boils down to `intent.' When one desires something strongly enough the Universe has no choice but to oblige. Lately, however, it seems the Law of Attraction on which the recent movie, The Secret, is based, has come under fire. How, postulate many who are either unable or unwilling to see the logic behind this Law, can creating be as simple as the adherents proclaim? Are the debunkers right? Is this `Law' merely some New Age, woo-woo mumbo jumbo or a bona-fide Law similar to gravity, or possibly something in between? In all fairness, I have to admit that, I too, wondered how it could be so simple. How could one possibly desire something badly enough to `create' it into existence without, oftentimes, even acting on that desire, other than to think about it? And what about such desires as, say, wanting to fly? Could we manifest an ability that seems to go totally against the physical Laws with which we all must (seemingly) abide? Although I've not personally experienced this, what about those who are purported to levitate or bi-locate or miraculously heal themselves or others of terminal diseases? It seems to me that if it is, indeed, possible to do these things, could it not also be possible to fly? And yet, the more I thought about it, the more I realized that...isn't that what we do every day? We desire something that to many would seem impossible, we think about having it, and if we think long and hard enough, eventually (if not sooner) we find a way of manifesting whatever it is we so strongly desire into existence. As the saying goes, a house begins as a fleeting thought, then becomes an idea, eventually makes its way to a blueprint, and ultimately finds expression in being `manifested' or constructed out of tangible, material substance. Yet, it began as a mere thought, a desire. In fact, some of our greatest Teachers and thinkers - from the ancient Sumerians, Egyptians, Hindu, Chinese and Native Americans to Socrates, Plato, Buddha, Jesus,

The Laws of Attraction Found Me- Now 48 Hours Later

Published by Thriftbooks.com User , 15 years ago
All I can say is WOW! I watched the movie "The Secret" 48 Hours ago, and now have found Esther and Jerry Hicks in that same time period. If you are earnestly seeking a better Life, you will find it. "Birds of a Feather Flock Together" I am just blown away with my Transformation in the past 2 days. I went to Barnes and Nobles last night about this time. We couldn't find any of Esther and Jerry's Books. I just began walking around, believing some how, some way this book would find me. Well the Employee at Barnes and Nobles tracked me down, and guided me to another section. We still couldn't find any of their books. The Employee walked away and I thought I would never see him again. Well, as I started to walk away the third time, he came walking towards me with asserment, and handed me the Book "The Law of Attraction" Never in my Life at Barnes and Nobles had I met a Employee who was so PERSISTENT on finding me a Book. Then I began asking?? Was this myself, the employee at Barnes and Nobles, or the Principles of the Law of Attraction? They say when the Student is ready, the Teacher will come. Well it's 10:35 P.M. almost 24 Hours later and I have read all 194 pages of this Book. I truly have found what I am looking for in this amazing Book. In life there are Laws, Laws of Gravity, Laws of our Government, Laws of Prosperity, Wealth, Health,etc. If you want to play the Game of Life, you must know the Universal Laws. It starts with getting a foundation within the Laws of Attraction. When you think your life sucks, your work is awful, your relationships are just horrible, guess what you will attract?? Those exact things. Your life is a magnet, what you think about you will attract, it's a Law. When you think about Health,Wealth,Prosperity, Great Relationships, you will attract those things. Your Life's make up is within you, you dictate how it will be played, not your surroundings. Get your mind right and start today. Read this amazing Book!. I had no idea who the Hick's where 48 Hours ago, but by reading this Book my life has been transformed overnight. I will never be the same person again, and the same goes for you. Think outside the Box, and if you earnestly want change, start by buying this book today!!

The nuts and bolts of reality creation

Published by Thriftbooks.com User , 15 years ago
Esther and Jerry Hicks have been putting out the channeled Abraham material for about twenty years, but it has recently enjoyed a surge in popularity. I only discovered it about a year ago and have read their last three books. This latest one, The Law of Attraction, is probably the most succinct and direct summary of the philosophy, which is actually quite simple, though not always easy to put into practice. I would recommend this book to anyone familiar with self help and/or channeled type material, as well as anyone new to this kind of thing. If you are already something of a self help or new age junkie, you will find Abraham amazingly clear and no frills. I mean this in a good way, for when studying a system of self improvement, you don't need a lot of theory and superfluous philosophy, ritual, chatter and so forth. Some of these can be fascinating, but if you are mainly interested in improving your life, what's crucial are the fundamentals. For the same reason, this book is an excellent introduction to the whole concept of the law of attraction. In the forward, author Neale Donald Walsch says, "This is it...put all the other books down." A strong statement, but it illustrates the power and importance of Abraham's message. Abraham is described as a collection of evolved non-physical entities. They are channeled by Esther Hicks, who also gives many public workshops. Essentially, the message of this book is that your thoughts and feelings determine your reality. Esther acknowledges that she first encountered the phrase, "You create your own reality" in Jane Roberts' Seth books. The Seth material, however, while also channeled and carrying a similar message, is far more complex and technical. I find the Seth books interesting and may reread them some day, but if you are primarily interested in putting these ideas into practice, as opposed to studying them, I would recommend Abraham. The advice Abraham gives again and again is that it's important to feel good, because how we feel attracts more of what we have, whether good or bad. A simple message, and one that has been stated many times before, but unless you have truly mastered it (or dismissed it as impossible, in which case this book obviously won't be of interest -Abraham makes no effort to prove the "validity" of the ideas to skeptics) this book is one you should definitely read.
Copyright © 2022 Thriftbooks.com Terms of Use | Privacy Policy | Do Not Sell My Personal Information | Accessibility Statement
ThriftBooks® and the ThriftBooks® logo are registered trademarks of Thrift Books Global, LLC