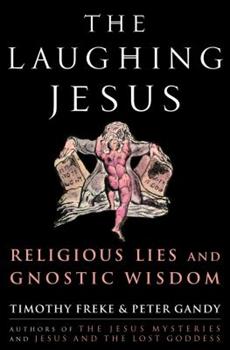 by Peter Gandy and Tim Freke

Timothy Freke and Peter Gandy, authors ofThe Jesus MysteriesandJesus and the Lost Goddess, return with a powerful indictment of Jewish, Christian, and Islamic fundamentalism and a passionate reinterpretation of Gnostic spirituality. According to Freke and Gandy, religiously inspired acts of violence, such as the attacks on 9/11, are nothing new. They are the continuation of a long and bloody history of brutality caused by mistaking bizarre old books...

Severe indictment of religion....A gnosis for the 21st Century

Published by Thriftbooks.com User , 16 years ago
This is the fourth or fifth book I've read of Timothy Freke's and/or Peter Gandy's. This particular book is the culmination of The Jesus Mysteries and Jesus And The Lost Goddess. The full impact of this book is realized when read as the third installment of this trio of books. However, it can be read alone without those and the impact will still be great. The first half of the book is a severe indictment of the three Western religious traditions...Judaism, Christianity, and Islam. The fundamentalist, literalist spirit of these three religions is exposed for all to see. Each one is an anachronism, way past its time, and really of no value to the 21st century. After delivering this stinging polemic against the literalist spirit, the authors offer up for our consideration a new perspective... an expansion of a very old perspective but in 21st century language and explanation. This perspective is referred to as Gnosis...simply the experience of Oneness. Freke and Gandy take the ancient Perennial Philosophy, strip it of archaic language and talk to us in modern, 21st century lingo. The authors excell in making this presentation real and meaningful to us moderns. They shine in applying this ancient wisdom of Gnosis to our world today, to our experience today. Going even beyond the gurus of the 19th and 20th centuries, the authors inform us that we still get to be HUMAN and get to be the All...the One. This is the glory of the message of gnosis...We get to experience BOTH the fullness of being human...sometimes separate, alone, and afraid, AND the peace and serenity of knowing that we are safe and One with all that is. Gnosis is BOTH/AND and not EITHER/OR. It is a recognition of one's individuality AND one's unity with the All. Gnosis, or Lucid Living, is a viable and necessary alternative to the separateness and alienation so prevalent on the planet today. Go for it. You won't regret it.

Published by Thriftbooks.com User , 16 years ago
After their first two books on Gnostic thought, I was very anxious to read this latest book by Tim Freke and Peter Gandy. It didn't disappoint me at all. The Literalist (as the book refers to them) faction of Christianity (and of other religions as well) will be apoplectic over the book's well-written, well-researched and thoroughly annotated indictment of what we've been fed as truth for the last two millenia. The second half of the book explores how we, as the human race, can pull ourselves up and out into an exciting era of "enlivenment." It, too, is very thorough and scholarly as well as being an easy read. Though it is very thought provoking, I might add. I read with great puzzlement one reviewer's accusation of "too many exclamation points." I didn't remember this at all, so I skimmed back through the book to find some. It took a lot of searching, but I found three placed in three different, but very appropriate, spots. I imagine there are more, but not enough to distract. When one is deeply dreaming, I suppose an exclamation point can be very annoying.

Published by Thriftbooks.com User , 16 years ago
This book goes beyond the authors' first two books, "The Jesus Mysteries" and "Jesus and the Lost Goddess," both outstanding books. It explores Gnosis, and shows how to experience "enlivenment" which is living in a state of enlightenment. Nice term, which I think they coined. The authors are somewhat, well, brutal, in their treatment of literalist religion, but who can blame them given the past and present brutality of literalist, fundamentalist religion? No lame apologists here!! Other books are also being released along the same lines, notably "The Pagan Christ" by Tom Harpur, which is a must-read. This author, along with Freke and Gandy, shows how mystical Christianity is just like mystical Pagan religions, hijacked by the third Century power-hungry Church into a dogmatic, literalist religion. All these authors are not out to destroy Christianity, but really to help prevent its self-destruction as more and more people read books like these and realize that there never was a historical Jesus. The Christ is the God-fragment within us waiting to resurrect us from the lifeless lives that we lead....no matter what our religion; the same as the Atman of Hinduism, the Buddha-Nature of Buddhism, and so on. I liked the gentler style of the previous two books better, though; this one more kind of grabs you by the ear and yells into it...(grin). But it is yet another phenomenal book by two great authors. Visit www.timothyfreke.com its worth a visit. Raja

Published by Thriftbooks.com User , 16 years ago
This is one of the most compelling books I've ever read. MOST mainstream Christians will attack this book. MOST mainstream Jews probably will too. And, I predict the authors will be probably be denounced by Islamic clerics at some point for their treatment of the religious personality Muhammad (which is very illuminating). Freke and Gandy, working on the premise that Christianity, Judaism, and Islam were all originally Gnostic (deep wisdom) traditions, completely pick apart the Literalist streams of each tradition, and their scholarship totally slams the self-serving ego-driven political shenanigans of each of the faiths as well--again, specifically in their Literalist forms. The Jewish Fantasy Factory: The section on the Jews is absolutely fascinating and asserts from the historical record how a monism of Jewish identity as a people is a problematic idea; the authors suggest multiple sources for the Jewish ethnic roots, and go on to suggest -- again from archaeological evidence and the historical record -- that their mythic odyssey out of Egypt, and the Israeli claim to Jerusalem, is a complete fabrication, driven, in essence, by a religious and cultural identity crisis of sorts that still fuels the conflicts of today and is driven by Literalist interpretations of what was originally a myth-line. A number of the formative myths in the Jewish tradition, the authors assert, are actually derived and inspired from exposure to Greek tradition, while they go through the Tanakh/Torah (the Old Testament) with something of a fine-tooth comb and, in a truly riveting manner, show how its authors were essentially attempting to synthesize a number of competing desert Pagan traditions in the region. The Most Famous Man Who Never Lived: The premise of the section on Christianity I was already familiar with, having read one of their other equally powerful and controversial books, Jesus and the Lost Goddess: The Secret Teachings of the Original Christians. But, again, I found myself truly fascinated to learn that certain books that comprise the "universally agreed upon" Christian canon (Matthew, Mark, Luke, John, Acts--renditions of Peter and Paul) were almost single handedly emphasized (Bishop Irenaeus), whose word-sculpting was, quite intentionally, attempting to suppress and debunk the Gnostic stream of Christianity (which relates to the Jesus myth more as a personal initiatory, archetypal, and transformative process rather than a literal historical set of events involving a quasi-divine/human person). Freke and Gandy articulate with a real shine how Irenaeus was simply attempting to compete for followers in Rome at a time when it had become a spiritual marketplace of sorts. Irenaeus sought to establish a viable tradition in Rome, and in time, thanks to Constantine, it worked, for the Literalist version of Christianity was offered political support by the state of Rome and all other versions were declared as heresy (funny, isn't it; heretics

Gnosis is the Perennial Philosophy, the goal of the Mysteries

Published by Thriftbooks.com User , 16 years ago
_The first thing to remember when reading or speaking about this book is that it is in no way an attack on the existence of God. What this book is, is an attack on false, literalist dogma that has so dangerously distorted the true Reality of God for so much of Western history. Let me say that I read the authors' first two books on this subject (more than once), and this third volume is a more than worthy culmination. _The first half solidly deconstructs and demolishes any claim to historical accuracy or legitimacy for the Holy Books of the Jewish, Christian, and Moslem religious traditions. All Holy Books are the work of men, not of God (including Gnostic books, but Gnostics realize this.) Personally, while I was aware of the Mesopotamian and Egyptian sources in the Tanakh, I was amazed to find that it appears to have been compiled as late as the first century BCE- and by the Maccabees in order to justify a rule so ruthless that it would put the Taliban to shame. Nor did I realize that the Romans were actually allies of the Maccabees against their Syrian Greek foes (which explains much in terms of creating a false religion and history for political ends.) An excellent case is also made for the origin of monotheism among the Greeks and not the Jews (read your Heraclitus, Pythagoras, and Plato.) It is also this first half that emphasizes the difference between the Gnostic and Literalist traditions. The Gnostic is the true and original Christian (or pre-Christian) who sees in Jesus the allegorical ideal of man awakening to his true origin and nature. The Literalist is one who bullies everyone into blind belief in dogmas that obstruct and distort true experience of God. There is an excellent table that spells out the specific differences between the two. As for the critique of Islam, well, how could a copy of a copy of a bad original be anything less than the worst of them all...? _The second half of the book deals with the nature and obtainment of Gnosis. The authors' model holds that Gnosis is a natural state akin to lucid dreaming (dreaming, yet consciously recognizing that you are dreaming.) You experience a shift in consciousness and perspective. Your ordinary world and life does not disappear as you enter some new supernatural state or dimension. No, but your consciousness expands to the point that you realize that your old everyday life, including the your old sense of self, is not the totality of existence. You realize that you are part of a greater "life-dreamer" which is dreaming both itself, as well as, everyone and everything. You realize that we are all part of this great dreamer and are all connected at this higher level. We are all One. The purpose of life is to awaken and personally experience to this knowledge- this Gnosis. This section of the book points the way. _Having first touched upon the Gnosis over a dozen years ago, I like to think that I possess an intuition when it comes to teachings on the subject. I am not saying tha
Trustpilot
Copyright © 2022 Thriftbooks.com Terms of Use | Privacy Policy | Do Not Sell My Personal Information | Accessibility Statement
ThriftBooks® and the ThriftBooks® logo are registered trademarks of Thrift Books Global, LLC