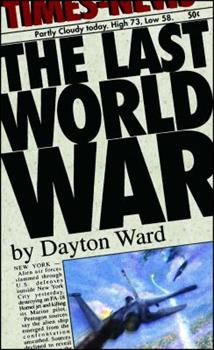 (Book #1 in the The Last World War Series)

Independence Day meets Stargate in the skies over America, Europe, Russia, and Asia, and on the ground throughout the cities of the world. It started small, with an unprepared band of Marine reservists encountering deadly extraterrestrial visitors in the backwoods of Missouri. But this fatal First Contact rapidly escalates into a global crisis as mankind discovers that two warring species of aliens have invaded our world through a network of hidden...

Published by Thriftbooks.com User , 16 years ago
I loved this book, Dayton did a great job with it. -slight spoiler- My only problem with it is he made the aliens to much like us with their own cold war and similarities between the U.S. and Soviet Union on their alien planet. I would've went a different way. But it was still a very good book, Hopefully more are on the way.

World War could be the beginning of a new series

Published by Thriftbooks.com User , 17 years ago
What the first few reviewers say is correct, but only to an extent. The auther has a great idea that hasn't been done before in this manner. Yes, there are minor glitches but none are fatal. There is the big governmental that tries to hide Alien contact but it is logical and never devolves into the X-files concept. With this idea, I can forsee a whole series of books, not only in the war genre but but classical SF in that the gates are used for exploration and colonization. All in all I found it a good read and look forward to the next book from ward. I would recomend it.

I LOVED this book

Published by Thriftbooks.com User , 18 years ago
Aliens attack earth. It's been done before, I hear you say. Not like this it hasn't. Dayton Ward has broken any mold there may have been with The Last World War. The book starts with a group of Marine reservists, in Missouri, who are doing their annual two week training. Things quickly move from training to discovering the aliens to an all out battle that comes to have global consequences. The aliens don't arrive on earth via space ships. Their arrival is a mistake. The aliens have been at war with one another for years on their home planet and "teleporters" were developed to help end the war. The hope was that these "portholes" would allow the aliens to travel around their own planet so that troops could regroup and be sent into the enemies most vulnerable areas. They had no idea that the "portholes" would lead them to a new world. The first 10-20 pages of the book is a little slow but from there is picks up the pace and never slows down. The author gives us insight into not only the "good aliens", the Blues, and humans as the battles rage on but also into the enemies, the Grays, minds. He lets us in on what everyone is thinking and it is sobering. Everyone believes that they are fighting on the side of right and justice. You begin to feel not only for the humans and Blues but also for the Grays. I have no idea how anyone could give this book less than 5 stars. I read the complaints about the ending and I just don't see what they're talking about. Sure things were left hanging but this leaves the door open for sequels, which I hope are forthcoming. And if it is the end? That's fine with me. I plan on buying this book for all of the readers on my Christmas list.

Published by Thriftbooks.com User , 18 years ago
Dayton Ward did an excellent job with "The Last World War". Not only is it well written and a smooth read, but the characters and imagery are excellent as well. This book tends to remind me of William Dietz's "DeathDay" and "EarthRise" books (which was written from a human and alien point of view), but with a much better storyline.The only downfall this book has, as mentioned in a previous review, is the lack of a concrete ending. The book just sort of ends without concluding what it started. While I do hope that another book follows to fully conclude the story, it shouldn't have to. This book was not created with an "epic storyline spanning multiple books" being advertised, so it should conclude the story it began.However, I'm willing to overlook the minor flaws overall and say that this was an excellent book. I do hope Dayton Ward continues to write books in this genre, as this one was excellent.

Published by Thriftbooks.com User , 18 years ago
I have just finished reading Dayton Wards The Last World War. It is an awesome read. It is one of those books that you don't want to put down until its finished. What impressed me is getting to see the aliens points of view. That is both the good ones and the ones considered bad. All is not in black and white and we can really sympathize with all sides . There definately needs to be a follow up to this storyl
Copyright © 2020 Thriftbooks.com Terms of Use | Privacy Policy | Do Not Sell My Personal Information | Accessibility Statement
ThriftBooks® and the ThriftBooks® logo are registered trademarks of Thrift Books Global, LLC