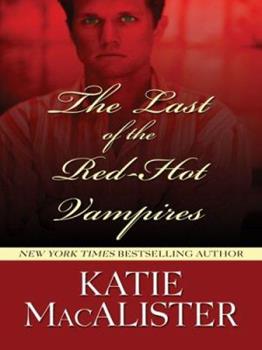 The bestselling author of Even Vampires Get the Blues delivers a diabolical tale of a vampire who's sexy as hell, and the woman who can satisfy his newfound hunger and possibly save his soul. Original.

Published by Thriftbooks.com User , 14 years ago
The Last of the Red-Hot Vampires Wonderful and fun reading as usual from Katie MacAlister. I don't think I have ever been disappointed with any of her books. This is a MUST read for anyone who wants to laugh and cheer at the same time!

Published by Thriftbooks.com User , 14 years ago
Same funny, romantic romp. Portia is a physist with an extreme logical mind caught up in a whirlwind vaction touring Europe with a a friend. When said friend makes a deal with her about proving or disproving paranormal events and leaves her alone in fairy circle with a photocopied chant. Portia comes face to face with a virtue, a sexy man, and shadowy evil . . . things. In that order. The first 100 pages are extremely sloooooooww. Due to despite being slapped in the face with paranormal events, Portia manages to stand firm in her belief that everything can be explained scientifically. Yet, if you can stick through the pain in the butt beginning, things steam up and get interesting in the end.

Wonderful addition to her vampire series

Published by Thriftbooks.com User , 14 years ago
In the latest addition we learn that there are more ways to become a dark one than being born to an unredeemed Dark One. Also we get the unveiling of the Court of Divine Blood. Portia is a good heroine who has to deal with learning that paranormal does exist despite her skeptical, scientific background. Theo is an interesting hero who is different from Katie's previous Dark Ones, but it is clearly explained and in keeping with his background. Portia and Theo do share chemistry and do make quite a team. We do get to see some familiar faces which is quite enjoyable and not contrived. Overall a very satisfying book which is not the end to her Dark Ones series.

Published by Thriftbooks.com User , 14 years ago
Facts, nothing but the facts, are how physicist Portia Harding sees the world. Logic can apply to anything and those items that fail to be validated in a consistent reliable manner simply mean some facts remain unknown. When Portia visits a so-called English magical site, she assumes superstition or con artists worked their trade to bilk the locals. However, she soon learns that there are some odd things in the universe that do not fit the Harding concept of reality when she skeptically chants, which summons the virtue Hope from the Court of Divine Blood. Seeing an opportunity to save herself from a deadly threat, Hope transfers her ability to control weather onto Portia before vanishing into seemingly thin air without further explanation. Portia, using logic, assumes it must be something she ate causing hallucinations especially with the cloud over her head and when her next visitor claims to be something called a nephilim, the son of an angel Theondre North. He tells her he will protect her while he needs her to change his fate. However, she stands accused of murdering a virtue and his fate leaves her neck exposed to a bite or two unless she becomes illogically in love. This is a wild zany romantic fantasy that will have the audience wondering what next will happen to the female Mr. Spock. The fast-paced story line never slows down as one incident follows another destroying Portia's logical thought process that she clings to in hopes of waking up except when Theo kisses her. Paranormal romance readers will enjoy this madcap tale of the logical physicist who finds love with THE LAST OF THE RED HOT VAMPIRES. Harriet Klausner
Copyright © 2020 Thriftbooks.com Terms of Use | Privacy Policy | Do Not Sell My Personal Information | Accessibility Statement
ThriftBooks® and the ThriftBooks® logo are registered trademarks of Thrift Books Global, LLC