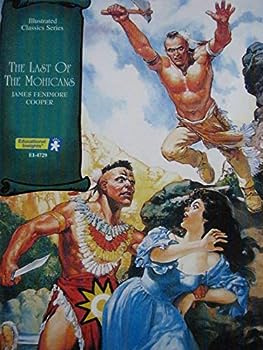 The Last of the Mohicans (Illustrated Classic)

The tale of a Mohican brave's struggle to protect two English girls from an evil Huron.

Published by Thriftbooks.com User , 11 years ago
James Fennimore Cooper's five books known as "The Leatherstocking Tales" ( the Last of the Mohicans is the 2nd in the series) are some of the most exciting books I've ever read. I highly recommend

The most exciting and fast-paced of the Leatherstocking Tales

Published by Thriftbooks.com User , 12 years ago
Set during the French and Indian War, THE LAST OF THE MOHICANS follows Cooper's renowned hero Natty Bumpo (known here at "Hawkeye" or "the scout") on an adventure to rescue a couple of well-bred daughters of America from a hostile Indian tribe and their treacherous leader Magua (or Renard Subtil). Compared to Cooper's other work, this one is a non-stop thrill ride, with plenty of intense and fast-paced action mingled in with his usual overly-verbose descriptive style. Because of that, this is my favorite of James Fenimore Cooper's novels, and I'd recommend it for any reader. As a piece of historical fiction, this one again stands out as being superior to his other works. With the focal point of the setting being around the armies and officers of the French and British empires right smack in the middle of the French and Indian War (or Seven Years War if you're not from America), this story is grounded in a well-known historical perspective. Some of the events related in this novel also have strong backing in historical facts. From the individual battles described to the extremely messy and downright horrifying massacre after the surrender of General Munro to the French, Cooper's tale is based on real life occurrences. Refreshingly, Cooper doesn't shy from portraying the Native Americans in THE LAST OF THE MOHICANS in a less than flattering manner. While described as complex and admirable in some instances, in others the Indians here are brutal, crazy, and downright savage. Even the "good Indians" here, in Chingachkook and Uncas, don't fail to retrieve the occasionally scalp when the opportunity presents itself. The strangeness and brutal-seeming practices of many Native American tribes are well-known historical facts, and it is nice to read a book that doesn't sugar-coat or justify Indian practices for the sake of political correctness. While its not the easiest book in the world, this one should be enjoyable for nearly every type of reader. Highly recommended.

Published by Thriftbooks.com User , 15 years ago
This book is a very well-written and amazing book. To be honest, it was hard to start out (because I didn't get used to Cooper's method of writing), but once I was a chapter or two into it, it was quite excellent. The portrayal and story and characters were all admirably well designed and I am glad I bought it.

One of my favorites

Published by Thriftbooks.com User , 16 years ago
It is easy to see that the modern action hero owes everything to Natty Bumppo. This is the best of the Leatherstocking Tales, though "Pathfinder" and "Deerslayer" are good too. "The Prairie" has its merits, but Natty is very old in that one, and "The Pioneers", the first to be published, deals only with Bumppo as a supporting character. "Last of the Mohicans", however, is a masterpiece of romantic fiction, and the birth of the American action novel. Cooper's knowledge of the American Indian is not always accurate, but it is easy to see the genesis of many legends that surrounded Native Americans in American lore into the 20th century in this and other books from the Leatherstocking Tales. The language is antiquated and may be a bit difficult for younger readers, but it is worth it. Also, a note on the film: The Daniel Day-Lewis movie is good--I enjoy that too, but it is incredibly different from the book. It is only VERY loosely based on Cooper's work, and Cooper's is unquestionably better. If you are curious as to why this book is regarded as a "classic", pick it up. I hope you get as much from it as I did.

Whoa that was Awesome!

Published by Thriftbooks.com User , 16 years ago
In the book The Last of the Mohicans, I could not believe the amount of Old Literature there was inside. Many times I found though that the descriptions (although long) were helpful and gave me a precise image of the story. The main characters are pretty cool and have a thrilling adventure in many intense battles and journeys in the area north of present day New York during the French Indian War. I recommend this book to anyone who enjoys a good adventure and likes stories that stretch your mind with a good literate workout. Oh and by the way Galloway, this was actually pretty darn cool. I liked this book a lot. See ya in class!

The Last of the Mohicans: A Narrative of 1757 Mentions in Our Blog