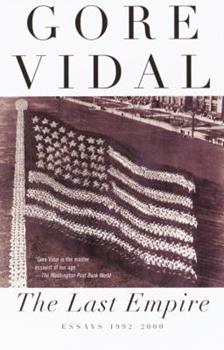 Like his National Book Award--winning United States, Gore Vidal's scintillating ninth collection, The Last Empire , affirms his reputation as our most provocative critic and observer of the modern American scene. In the essays collected here, Vidal brings his keen intellect, experience, and razor-edged wit to bear on an astonishing range of subjects. From his celebrated profiles of Clare Boothe Luce and Charles Lindbergh and his controversial essay...

Published by Thriftbooks.com User , 19 years ago
Gore Vidal is a patriot who sees America through the clear eyes of a long-term relationship. If an unexamined life is not worth living, then an unexamined country is not worth loving. Even as Mr. Vidal reviews our national foibles, examines our errors, and dissects our politicians his love of the founding principles of this flawed democracy shine through. There is no doubt as to Mr. Vidal's erudition, but he is also wickedly funny. Mr. Vidal is a political and social aristocrat that gives him name-dropping rights to the 20th century, and drop names he does. He's had dinner with everyone who matters, and it seems he's read everyone who matters more. Whether he's unveiling the secrets of America's entrance into WWII, or punching holes in Kenneth Starr's multi-million dollar investigation into Bill Clinton's peccadilloes he is unerringly on-the-mark. Gore Vidal is Noam Chomsky with a sense of humor, and the thinking persons' Michael Moore. These essays are a fascinating look at America, and a great read to boot.

Entertaining romp through letters, politics and the pop cult

Published by Thriftbooks.com User , 19 years ago
There is no question that Vidal likes to take people apart, especially political people. He likes to introduce the obtuse and stuffy to themselves, as it were, and to laugh at the pretentious. His favorite targets are on the Right, which is good, and his second favorite targets are on the Left, which is also good. He is, strange to say, and perhaps unbeknownst to himself, as American as pizza pie and Cabernet Sauvignon, matzo balls and chow mein. If he didn't exist we would have to invent him. He is the heir of Mark Twain, H. L. Mencken and Edmund Wilson with a dollop of Truman Capote thrown in. His ego is as wide as the Mississippi and his self-aggrandizement as consistent as the winter snow in Buffalo. He has done everything in literature except write poetry, and he has probably done that, and I just don't know about it. He has run for congress, for president, written screenplays (e.g., Suddenly Last Summer) and TV scripts, plays, and appeared in a science fiction movie (Gattaca). He and William F. Buckley Jr. have played clowns for one another, and he has been the confidant, if not of presidents, then of first ladies. He thinks of himself as beautiful, although it's been a long time since he really cared about that. He is one of our finest and most penetrating social critics, an original who manages to occupy the left while maintaining a stance somewhere to the aristocratic right of the Boston blue bloods, although of course his roots are in the political south, in Tennessee, Washington, D.C. and Mississippi.I have never been able to read, much less appreciate, however, his fiction. No doubt the failure is mine. Yet I think it indisputable that Vidal is a much better essayist than he is a novelist. In this, his latest collection--effectively just a continuation of his United States: Essays 1952-1992 (1993), a massive volume of 1,278 pages, also jacketed ironically in red, white and blue--Vidal continues his unrelenting attack on all things pretentious, pompous, political and/or simply within reach.He can be balanced (as in "Edmund Wilson: Nineteenth-Century Man," the first essay), slighting with faint praise ("The Romance of Sinclair Lewis" p. 46), adoring ("Sinatra" p. 149), brutal (as in "Reply to a Critic" p. 79), and devastatingly funny, particularly when addressing the hijinks of American pols as in his essays on FDR, Truman, Nixon, Reagan, Clinton, Al Gore, etc. He is at his best when defending the constitution, human rights, freedom, and democracy against its enemies as in "Shredding the Bill of Rights," p. 397, "A Letter to Be Delivered," p. 436, and "Japanese Intentions in the Second World War," p. 457, not to mention perhaps a hundred other essays here and elsewhere. His main tactic is a cynical sarcasm laced with selected facts from his prodigious memory. He can be ironic and surgically subtle, but he is not above plain old ridicule. His style is accomplished and erudite without being stuffy. His treatment is popu

Published by Thriftbooks.com User , 19 years ago
And we rejoice. Raconteur, critic, historian, polemicist, name-dropper - Gore Vidal either knew everybody who was anybody or is related to them. In this successor to "United States," we meet FDR, JFK and Jackie, Dawn Powell, Edmund Wilson, Nixon, Lindbergh and Sinclair Lewis, to name a few, and gain perspectives that nobody else could provide. We watch as Mr. Vidal hilariously demolishes a critic and marvel as he tears into John Updike. We learn that Thomas Mann was inspired by a Vidal novel to return to "Felix Krull." But for most of the book, we are treated to Mr. Vidal's vehemently expressed political views (the military-industrial complex runs the country, the American polity is a single party state with two right wings - Democratic and Republican, the Federal government is a form of tyranny, the majority of Americans are worse of than their counterparts in other rich countries). Whether you agree or not, reading Vidal always has the salutary effect of making you revisit your assumptions. This reader certainly awaits more from Gore.

It is truly a joy to read this book

Published by Thriftbooks.com User , 20 years ago
As usual Gore Vidal is an excellent essayist and social observer in this book. His books are quite informative and you learn a lot about the US and many other issues. For example, I did not know that Frank Sinatra had leftist tendencies, [leftists by American standards as Mr. Vidal aptly points out]. He was sort of blacklisted and tormented by the FBI of Hoover most likely for that than his alleged connections to the mob. This example is just one of many facts that you learn when you read Mr. Vidal's books. I sometimes wonder how many hours there are in his day to read all the books and articles that he refers to. And one can tell that he had read them from cover to cover. If you are interested in current affairs and history or just want to read about Sinatra, Updike, Twain, Lindberg, Anthony Burgess, and many others, just pick up the book and read it. It is truly a joy. By reading Mr. Vidal you also learn about yourself. I learned from reading the article on the vice president Albert Gore why I do not like Faulkner. His style is not bearable for me. I always thought I am missing something because I am not an American. Now I know I never liked that kind of style in my own native tongue either. I do not spoil the book for the readers but I just want to quote one sentence that made me almost fall from the chair laughing while reading it in a bus. I am sure the other passengers wished the bus would have a stop in front of a mental hospital to deposit me. In the passage below he is writing about the magazine The New Yorker . "Nabokov .... needed all of [Edmund] Wilson's help in fighting off editorial attempts to make his prose conform to the proto-Raph Lauren house impersonation of those who fit, socially in the roomy top-drawer-but-one." P. 93 If you do not think this is funny maybe Mr. Vidal is not for you. But read it for all the information in there for your next term paper or class project on politics, literature or almost any other subject you can think of. But don't forget the right citations. There are many professors who do not admit in public that they read any of Vidal's books, but they do read it at home. Do not flunk your course because you think Mr. Vidal is too radical and your conservative professor probably never heard of him and you can copy his words as yours.

Vidal In The Gloaming

Published by Thriftbooks.com User , 20 years ago
It seems perfectly fitting that Gore Vidal should become our leading man of letters here in fin de siecle America. Through his novels he has become our de facto historian, and through his essays he has emerged as a wry observer of American life and letters, although a sort of disembodied one, as he spends most of his time at his home in Italy.As he enters what is certainly the last fertile period of his life, we ask ourselves if The Last Empire will indeed be Vidal's last collection, or last memorable collection, of essays. If this should indeed be the case, Vidal has gone out a winner.Vidal's strong point as an essayist is not to lecture the reader, but rather to take the reader into his confidence, almost as if he was at his home in Ravello having a conversation. Whether he is discoursing on Claire Bothe Luce, Mark Twain, or the latest history of the Kennedy years, Vidal brings a lot of himself and his personal experiences to the page and opens up new vistas even to his most educated readers. The beauty of Vidal is no matter how much the reader brings to his essays, he or she will always leave with something, whether a previously unknown fact or a lead for further reading. One of the best essays in the book is "Twain on the Grand Tour," during the course of which Vidal takes apart an academic's book of psycho-babble on Twain. There is nothing Vidal dislikes more than academics who make their subjects fit whatever theory-of-the-day is popular, and by doing so, perform a disservice both to their subject and the reader. As a further bonus for us readers, the hapless fool Vidal criticized didn't know when he was beaten, and sent a reply. Vidal's riposte is a classic, hoisting the fool on his own petard and damning him with his own words. It's like watching an osprey catching fish in the water.One caveat, though. Vidal becomes glaringly inconsistent during the course of his political essays when he insists on issuing a free pass to the Clintons. It is apparent while reading the essays that he has succumbed to what passes for charm in the former First Family, Hillary especially. For him, she seems to represent some combination of the best of Eleanor Roosevelt and Jackie Kennedy. Though he says time and time again that it is impossible to be elected ruler of these United States unless one is part and parcel of the military-industrial complex, these rules seem to fly out the window when discussing the Clintons as brave reformers in the face of ignoble Republican opposition. In reality, Bill Clinton has proven to be no more than the poor man's Huey Long, while his wife is resentful and duplicitous. Were this America of the forties, Joan Crawford could have easily essayed her in one of the Warner potboilers of the day. It gets so even wooden Al Gore, of whon Vidal has said many unflattering things in the past, is given that ticket to ride. Vidal's strength is as a critic; his weakness is as a supporter.Nevertheless, even flawed Vidal is far. far better t
Copyright © 2020 Thriftbooks.com Terms of Use | Privacy Policy | Do Not Sell My Personal Information | Accessibility Statement
ThriftBooks® and the ThriftBooks® logo are registered trademarks of Thrift Books Global, LLC