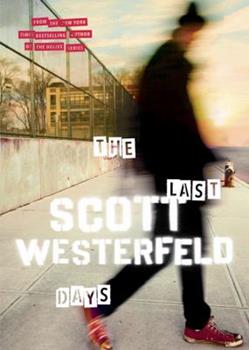 A mysterious epidemic holds the city in its thrall and the chaos is contagious'black oil spews from fire hydrants, rats have taken over brooklyn, and every day, more people disappear. but all that matters to pearl, Moz, and Zahler is their new band. they ignore the madness around them and join forces with a vampire lead singer and a drummer whose fractured mind can glimpse the coming darkness. will their music stave off the end of the world . . ...

The last days made a slaker want to read

Published by Thriftbooks.com User , 14 years ago
The last days is about a band trying to make it big in an apocalyptic New York city filed with overflowing trash, rats , black sewer water , and crazy people. In this apocalyptic New York there is a parasite that gives people super human abilities , the only catch is if these people don't take this medicine they go crazy ant start destroying everything they loved. In the book the peeps ( the people who got the parasite which gave them super human qualities) are naturally drawn to these under ground huge worm monsters which their natural instincts tell them to kill , so there is a secret underground war going on right under the common mans eyes . My favorite part of the book is the band is playing and there are a lot of peeps gathered around them when all of a sudden one of the worms pop up . What happens is the bands music attracts peeps and the worms and when they meet the peeps just go nuts and all of the peeps attack the worms resulting in a huge dynamic battle between the two. The peeps just go all out in a blind frenzy with swords and other crude weapons and kill these worms. After they kill one of the worms then they just start having a wild party which I find is pretty funny. Overall I believe this is a great book and one of the best I have read in a long time(not saying much since I read only when I have too). I recommend this book for many reasons . One of the main reasons is because it intertwines history with the plot , an example is this is they reference a lot of stuff to the black plague. Another reason why I recommend this book is because it is filled with action . The last reason why I recommend this book is because it is filled with music and it tells you a great story of how a band gets famous. In conclusion I know I have said this a million times but this is a great book.

Published by Thriftbooks.com User , 14 years ago
Scott Westerfeld's THE LAST DAYS provides a modern-day possible end-of-the-world scenario. It's a hot New York City Summer and a plague is turning people into cannibals. Five teens are trying to focus on their new band - but find their own music is caught up in the uncertainties of their times. LAST DAYS continues and end-of-world saga begun in PEEPS, but no prior familiarity is needed to quickly become accustomed to plot and action.

A gruesome, terrifying and amazing sequel

Published by Thriftbooks.com User , 14 years ago
The apocalypse is coming, so Pearl, Moz and Zahler do the only logical thing they can think of: They form a band. Pearl and Moz never knew each other before a parasite-positive, or a "peep" --- a person who carries a parasite that can best be described as vampirism --- threw a 1975 Fender Stratocaster with gold pickups out a third-floor window. Pearl turns out to be a talented keyboardist, and Moz, who plays guitar, invites bass player Zahler to join them. Moz recruits Alana --- their bucket-percussing homeless schizophrenic drummer --- from her regular street-corner gig in Times Square. Minerva, the lead singer, is an old friend of Pearl's. But Minerva hasn't been the same since she became afflicted with some kind of weird illness that causes her to hate the things she once loved, crave a lot of raw meat and gain a rather strong attachment to her cat. Black water is flowing from fire hydrants over streets piled with garbage. Cannibals are in charge of record companies. The Night Mayor, first seen in Scott Westerfeld's PEEPS, knows that time and technology have come together to form the perfect environment for a pandemic. The worms that haunt the subway tunnels of New York are getting stronger and more numerous. Homeland Security can't do anything about the spreading of the parasite that infects Minerva, but the Night Watch --- the organization working to stop the parasite's rapid spread --- can. They're going to attempt to use the band's unearthly melodies as a weapon against the killer worms and paranoid peeps. If you haven't already read PEEPS, you'll want to do so before starting THE LAST DAYS; even though this gruesome, terrifying and amazing sequel can stand on its own, you'll understand it a lot better if you read its predecessor first. This is not one of those vampire novels with a lush setting and lots of forbidden romance, but that's what makes it such a great read. Westerfeld's vampires are gritty and nasty, dressed in rags, and sweating and screaming amid sewer rats. They will keep you up late biting your nails and hoping they make it through the impending apocalypse just because you want to see more of them in a future book. --- Reviewed by Carlie Webber

Published by Thriftbooks.com User , 15 years ago
Set against the apocalyptic foreground first seen in Peeps, THE LAST DAYS is a sequel to the former, and definitely does not disappoint. Scott Westerfeld is one of the most consistently solid young adult novelists today and his latest only keeps the bar high and the readers happy. The Texas native is widely known for his innovative interpretations of "fantasy-esque" worlds and is the highly acclaimed author of THE MIDNIGHTERS and UGLIES trilogies. THE LAST DAYS is a story based in contemporary New York City with a splash of dystopia tasting. Westerfeld takes on the always fun topic of vampires, and, as seen in Peeps, revamping the whole legend behind the blood-thirsty immortals into his own super interesting view, basing the theory around "vampireism" as a disease similar, if not identical, to the Black Plague that ravaged the globe centuries before. Westerfeld delves more into a biological explanation, which involves carriers, kissing and biting, and a whole lot of rats. It's summer, and New York City is going crazy. The temperature is much more intense than usual, even for summer; the sanitation is no longer under control (rats!); people are disappearing, afraid to travel on the subways; and Moz and Zahler are a two-man, kind of half-band. But soon their luck will change when they meet Pearl, a Juilliard music student, and her newly turned carrier friend Minerva. The four of them, along with street drummer Alana Ray, whose mental condition allows her to view farther into the depths than is advisable, join together to write music so epic, even they do not understand the magnitude of what is going to happen. Things are changing faster than you think. So sit back, relax, and get ready to read these five teenager's soundtrack to the end of the world. It's going to be a good one. Masterfully written, old Westerfeld fans as well as new ones are sure to be blown away by the sheer raw sonic power of THE LAST DAYS. Reviewed by: Long Nguyen

Great Story Where A Teen Band Takes On Vampires

Published by Thriftbooks.com User , 15 years ago
Strange things are happening in New York City. Stranger than usual, that is. In fact it is down right scary in a paranormal kind of way. Black liquid spurts out of fire hydrants; rats, more numerous than ever, are roving the streets; and people suddenly go crazy, like the woman who throws all of her belongings out her sixth floor apartment window all the while screaming about who knows what. One about-to-be-discarded object catches the attention of two teen onlookers. The crazy lady waves a mid-seventies Fender Stratocaster with gold pickups and whammy bar. Pearl and Moz, strangers until this moment, work together to catch this valuable guitar before it crashes to the pavement. A quick glance above and both glimpse human figures moving swiftly towards the crazy woman's window. Neither comments aloud on this phenomenum. Instead they excitedly talk about their passion for music and the possibility of forming a band. Pearl is a super smart multitalented gal who thinks Moz is really cute. She and Moz and his friend Zahler meet for practice sessions, and quickly realize they need a drummer and a singer to make their band complete. Street wise Alana Ray agrees to play percussion. She has the ability to see music with color and movement and is especially sensitive to these visions when Pearl brings in her friend Minerva to sing. A few months earlier Minerva suffered a mysterious breakdown. She now stays most of the time in her room, fights to contain the beast she feels inside her, and writes pages full of weird symbols that only she understands. At the first rehersal, when all five gather to play, Minerva singing blends with the music and evokes wonder and fear. As the story progresses the musical talent of these teens and the vampire powers of Minerva become paramount in fighting monsters that live far below ground and only surface every seven hundred years. The Last Days is a sequel to Peeps (Razorbill, 2005) where the story of the vampires aka Peeps begins. Westerfeld's powers of description brings characters to life and immerse the reader into the world his vivid imagination has created. Aimed at the YA crowd but can be enjoyed by all ages.
Copyright © 2020 Thriftbooks.com Terms of Use | Privacy Policy | Do Not Sell My Personal Information | Accessibility Statement
ThriftBooks® and the ThriftBooks® logo are registered trademarks of Thrift Books Global, LLC