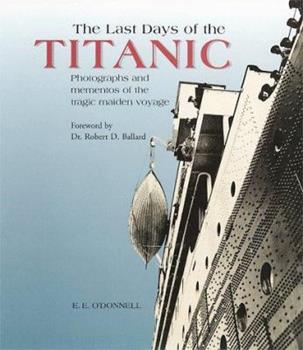 The Last Days of the Titanic: Photographs and Mementos of the Tragic Maiden Voyage

On the cover of The Last Days of the Titanic, Captain Smith peers at a lifeboat far below with a portentously worry-furrowed expression (there's a blow-up of the photo inside). The photo, which... This description may be from another edition of this product.

Published by Thriftbooks.com User , 14 years ago
This is a wonderful collection of the original photographs that are often reproduced elsewhere and both mislabeled as well as miscredited. Most noteworthy, the photo of the Olympic (in this volume) that is often attributed as the "last shot of the Titanic"...a great collection.

Published by Thriftbooks.com User , 14 years ago
photo's of ill-fated ship titanic is hidden tresure.the pictures are fascinating and chilling.the pictures of captain smith peering down chill you to the bone.

The pictures were great.

Published by Thriftbooks.com User , 23 years ago
the pictures helped show me how exactly the life was for the passangers in this great ship.

Published by Thriftbooks.com User , 24 years ago
The 10 for this book goes alot to Father Francis Browne who compiled his wonderful and unique collection of pictures,notes,and letters which he aquired during and after the Titanic tragedy,as a passenger on the Titanic.As Father Browne disembarked at Queenstown,Ireland,he was saved however had several friends aboard the ship and liked to take alot of pictures which he arranged in an album,writing his thoughts about each as he went along.There are a few pictures of other ships but this book is about the first 2 days aboard Titanic as a passenger and the aftermath.To be found in someone's attic,the photo album is a true Titanic treasure.The information is good, however not a wealth of technology as far as the construstion of the ship;this is rather personal which can tend to give one goosebumps....

Published by Thriftbooks.com User , 24 years ago
Found the numerous photos and accompanying text fascinating. Shows life on the Titanic as well as other ships,big and small. Hard to believe these were taken so very long ago. Brings the Titanic incident to life as you cruise through the book. What luck that the photographer departed the "T" in Ireland and missed the catastrophe.
Trustpilot
Copyright © 2022 Thriftbooks.com Terms of Use | Privacy Policy | Do Not Sell My Personal Information | Cookie Preferences | Accessibility Statement
ThriftBooks® and the ThriftBooks® logo are registered trademarks of Thrift Books Global, LLC