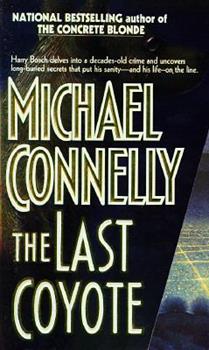 Harry Bosch's life is on the edge. His earthquake-damaged home has been condemned. His girlfriend has left him. He's drinking too much. And after attacking his commanding officer, he's even had to turn in his L.A.P.D. detective's badge. Now, suspended indefinitely pending a psychiatric evaluation, he's spending his time investigating an unsolved crime from 1961: the brutal slaying of a prostitute who happened to be his own mother. Even after three...

Published by Thriftbooks.com User , 19 years ago
It's only been in the past couple of weeks that veteran L.A. homicide detective Hieronymus "Harry" Bosch pushed his boss's face through the plate glass window of the latter's office. You see, Lt. Pounds - the consummate desk jockey - had interfered with one of Harry's interrogations, which resulted in the (probably guilty) suspect walking free. Now, Bosch is on involuntary stress leave with orders to see the department head doctor. To kill time between appointments, Harry unofficially re-opens an unsolved 30+ year-old murder case, that of his mother, a Hollywood hooker. Then there's his Hollywood Hills home, damaged by a recent earthquake and subsequently earmarked for demolition, to worry about. It makes for angst that would cause testiness even in the Pope. And, when Pounds is tortured and murdered and Lt. Brockman of Internal Affairs brings Bosch in for the third degree, our hero loses it:"Bosch shoved the table toward Brockman ... and pinned Brockman against the wall ... as he went without air ... (Brockman's) eyes bugged." The fictional road to this book's conclusion is the well-travelled one through police and political chicanery, either of which I can read about in the daily newspaper if I feel the unlikely compulsion. Rather, since each of us perhaps occasionally feels that mad urge for self destruction, the fun of THE LAST COYOTE is watching Bosch be a bull in his own china shop and then clean up the shards. Even that would earn it only four stars, in my opinion, except that the completely unexpected plot twist in the last ten pages merits it the ultimate fifth. If you're still bothering to fly the nation's unfriendly skies, or you're just stuck in a long post office que, THE LAST COYOTE is the perfect distraction to numb the experience.

Grabs you and takes you for a ride

Published by Thriftbooks.com User , 22 years ago
I don't like Los Angeles much but when Michael Connelly writes about it through the eyes of Harry Bosch, I can't stop turning the pages.In this, the fourth, Harry Bosch novel, readers are let into the heart and soul of a man who you don't think you could like (drinks too much, an in your face smoker and generally dark sort of guy) and you end up wanting to name your next cat after him. Actually, Harry probably would prefer a dog but the independent, ornery nature of a cat seems more true.Harry's on suspension and finds himself digging into the unsolved murder of his prostitute mother. By the time he's done we've learned plenty about Los Angeles in the early 60's, politics and the angst of a policeman without a badge. My husband, a former cop, simply shakes his head at Connelly's ability to express the experience of a renegade cop.We listen to these as books on tape and 13 hours go by in flash. Connelly's books are terrifically paced and this one has one heck of an ending.

Published by Thriftbooks.com User , 23 years ago
It's time in Bosch's life to blow the leaves off his mother's grave, loosen the dirt around it and dig deep for the answers not only to his mother's murder, but to many of his problems resulting from his insecure childhood. This is helped by the fact that he is suspended for pushing a superior through a plate glass window and sent to a police shrink. While he is on forced leave, he decides to resolve these problems, of course, against all company policy. But his view is "Everybody counts or nobody counts." As he unravels the mystery, it seems to him that the murder of his mother didn't count because she was just a woman of the streets. Both this theme and the theme of a reappearing coyote (lost, hungry and bewildered) occur again and again in this gripping, forceful novel. The coyote and Bosch are drawn together - like to like - and it seems to Bosch that both he and the coyote are a vanishing breed. I defy you to put Connelly's book down for more than a few hours, if at all. He is a master of twists, surprises and impeccable logic that carry you to the end in a whirlwind of pleasure and excitement.This one has a finish that is amazing and shocking.It's content will stay with you a lone time, perhaps forever,as you contemplate this world and those who live in it everyday. I maintain the best way to read Bosch is from the beginning with THE BLACK ICE - and follow in sequence. Michael Connelly has now won three awards for his novels. Everytime I think I have found my favorite another comes along to show me there cannnot be one favorite - only Michael Connelly himself, as a talented and intriguing artist. Angels Flight is the next in the series. His non-Bosch novels, The Poet and Blood Work are other extremely fine examples of his genius.
Trustpilot
Copyright © 2022 Thriftbooks.com Terms of Use | Privacy Policy | Do Not Sell or Share My Personal Information | Accessibility Statement
ThriftBooks® and the ThriftBooks® logo are registered trademarks of Thrift Books Global, LLC