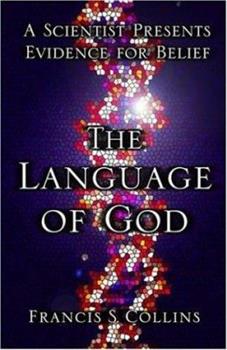 The Language of God: A Scientist Presents Evidence for Belief

Does science necessarily undermine faith in God? Or could it actually support faith? Beyond the flashpoint debates over the teaching of evolution, or stem-cell research, most of us struggle with contradictions concerning life's ultimate question. We know that accidents happen, but we believe we are on earth for a reason. Until now, most scientists have argued that science and faith occupy distinct arenas. Francis Collins, a former atheist as a science...

Science, mathematics and creation bundled into one.

Published by Raymond Palacios , 3 years ago
Very detailed in relations to how creation and evolution complement each other.

A good read for people with doubts.

Published by Old Dog MO , 3 years ago
Although written by a research Doctor it is well explained.

Published by Thriftbooks.com User , 15 years ago
In this deeply personal book, Francis Collins tackles the "science vs. religion" debate. Since at least Immanuel Kant, we have known that this is a false dichotomy. However, modernity has in effect turned a deaf ear to Kant. In this book, Collins follows in the footsteps of the Kantian tradition, attempting the great synthesis of the empirical and the spiritual, the pure reason and the practical reason. Like Kant before him, Collins is sure to raise the ire of both sides of the aisle. And that is usually a good sign one is doing something right. Collins reviews in the first part of the book his personal journey from atheism towards a theistic worldview, and the classical objections against it. His answers are mostly based on the apologetics of C.S. Lewis. This debate is much older than C.S. Lewis of course; most of his ideas can be found in St. Augustin, the Stoics, Pascal and Kant. However he does manage to present those arguments from a modern perspective, in an accessible conversational style. The second part of the book is a popular science exposition, where Collins draws extensively on his considerable scientific background in both physics and biology and, in particular, the leading role he played in the Human Genome project. The third part of the book is where Collins tries to reach a final conclusion about the issue of "faith in science and faith in God." He reviews his options, from Creationism to Atheism, and settles on the middle -of-the-road worldview he calls BioLogos. He expounds this theistic evolutionary view, according to which orthodox evolution theory is a fact, but also a divine means of creation. Here is where Collins slips a little, by trying to chew too much. While evolution from lower lifeforms seems to be an indisputable fact, the orthodox theory of evolution by natural selection operating on pure chance presupposes a metaphysical naturalist worldview, which is very contrary to a personal God model. From a scientific point of view alone, while evolution is a fact, it is clear that the mechanism of evolution is not yet completely understood (e.g., like Collins himself points out, the evolution of moral behavior has not been satisfactorily explained; but we can also mention the riddle of "junk" DNA, the various observed cases of puzzling "exadaptation," and so on). One omission that stands out is that Collins never once mentions Martin Gardner, the contemporary philosopher and essayist, also Kantian, who has written extensively on the issues examined in this book. All in all, I applaud Dr. Collins' courage and clarity in writing such a timely and important book. I have no doubt that it will leave creationists and atheists alike scratching their heads. It is a must read for anyone who wants a balanced and informed opinion on this subject.

Published by Thriftbooks.com User , 15 years ago
As a scientist (Ph.D., Physics) I found this to be a very provocative book. Collins has done a real service in bringing some clarity and civility to the broader debate on the roles of faith and science in a modern world. His passion for his discipline is contagious - he stands out as a spokesman for the scientific community independent of the faith/science debate. And to the later, he has done a real service in providing a calm, compelling and conciliatory voice to what has tended to be a contentious topic. In short, Collins' book serves to further a dialog (as opposed to a diatribe) on the topic - something that is increasingly rare in our polarized society.

A must read for seekers of Truth

Published by Thriftbooks.com User , 16 years ago
By the leader of the Human Genome Project. A most important book for any curious person, scientist or layman. Francis Collins is one of the most distinguished scientists in the world. This book is a call to end the wars between science and faith. The author proves that the theory of evolution is not an impediment to faith in God (theism). On the contrary, evolution is the language by which God spoke life into being. Science will never be able to explain the big truths that humans are most concerned of: Why was the universe created? What is the meaning of life? In the first place because that is not the purpose of science, but to study empirical data. The author claims that "Theistic Evolution" is the best option to stand by in this world of clashes between atheists, agnostics, creationists, proponents of ID, etc. He also intends to rename this synthesis of creation/evolution as BioLogos. Beautiful name, if may say. Here are the premises on which he and many other scientists (at [...]) rest their proposal: 1. The universe came into being out of nothingness, approximately 14 billion years ago. 2. Despite massive improbabilities, the properties of the universe appear to have been precisely tuned for life. 3. The mechanism of the origin of life remains unknown. Development of biological diversity and complexity through evolution and natural selection. 4. Once evolution got under way, no special supernatural intervention was required. (Evolution was part of God's plan). 5. Humans are part of this process, sharing a common ancestor with the great apes. 6. But humans are also unique in ways that defy evolutionary explanation and point to our spiritual nature. This includes the existence of the Moral Law (the knowledge of the right and wrong) and the search for God that characterizes all human cultures throughout history. This book is a very easy read for anyone. Science exalts God's creation; it does not dimish His work. This book is also, partly, a testimony of a man who found his personal relationship with God after being an atheist, later agnostic and, finally, accepting Jesus Christ.

Published by Thriftbooks.com User , 16 years ago
Francis Collins was recently interviewed by Charlie Rose on PBS. When I first heard him speak the words "God" and "evolution" in the same sentence, I braced myself for another tirade against one of my life heroes, Charles Darwin. Instead, Francis Collins delivered an inspiring and intelligent discourse on science and spiritual living. After the interview, I immediately read his book. To start, you need to know the kind of books I read. The last four books I've read are Team of Rivals by Doris Kearns Goodwin, The Last Lion: Winston Spencer Churchill, Alone 1932-1940 by William Manchester, Dispatches from the Edge by Anderson Cooper, and Shantaram by Gregory David Roberts. Collin's book fits perfectly into this list of quality books. The Language of God deserves 5 stars and is one of the best books I've read in years. Francis Collins has created a smart, thoughtful, articulate, and inspiring testament to God. While maybe overly ambitious in subject matter, Francis tackles subjects our parents warned us not to speak about at dinner parties. He addresses the logic of agnosticism, atheism, materialism, and religion. And this man doesn't hide his religious convictions yet he writes with a rigorous scientific intellect. Coming from a scientist of Collins stature, the religionists must humbly applaud his compelling theology which connects the often discordant strands of nature with the eternal purposes of the First Source and Center. Collins graciously counters the skeptic's reasons for doubting God and then transcends his own logical arguments with faith of someone who has experienced God personally. Near the end of the book Francis discusses creationism, intelligent design, and Theistic evolution. He coins a new phrase, BioLogos, which expresses his views of the integration of science and faith. His "BioLogos" will inevitably draw heavy criticism from those who ignore scientific facts and rely exclusively on faith experiences. Collins presents a modern theology commensurate with man's 21st century intellectual understandings. I applaud his courage, progressive thinking, and articulate explanations of God's loving handiwork expressed through evolution. Even further, Collins bravely touches on the Big Bang, life in the universe, man's genetic kinship to all living creatures, the origin of miracles, the resurrection of Jesus and more. Seldom can you find a self proclaimed evangelical Christian appreciative of diverse approaches to God. Francis' candor regarding his complete trust in Jesus comes with a tolerance and open mindedness toward all honest attempts, Christian or not, at discovering the Heavenly Father. As a devoted Urantia Book reading Christian, I do not feel threatened or condemned by his opinions. While his views occasionally diverge from the Urantia Book's description of the cosmos, evolution, and the life and teachings of Jesus, I enjoyed his writing without feeling defensive or attacked. I could not finish this review

Published by Thriftbooks.com User , 16 years ago
In The Language of God geneticist Francis Collins gives his perspective on faith and its relationship with science. After briefly giving a background about his leap of faith, he reviews what is known among the scientific community concerning the origins of the universe, the formation of the planets and how life began. Dr. Collins then gives a summary of the various worldviews people can choose when presented with this information, believers and non-believers alike. He overviews the situation when science trumps faith and vice versa. Intelligent design is also addressed in this part of the book, which he easily discredits. Then he introduces the worldview he subscribes to, theistic evolution, which he renames to biologos. Biologos is the harmony of faith and science, in that believers can trust in scientific rigor as an actual account of our natural world without undermining their faith in God. His discussion at this point arrested my attention until 4 a.m. I am convinced that in order for science to proceed and best benefit humankind, while at the same time leaving religious foundations intact, biologos should be adopted as the spiritual and worldly view by believers. It allows them to keep practicing their faith of choice without committing intellectual suicide by denying empirical evidence. Dr. Collins provides a thought provoking theological discussion on this issue with a voice that exhibits reason with regard to faith and science. A superb book.
Trustpilot
Copyright © 2022 Thriftbooks.com Terms of Use | Privacy Policy | Do Not Sell My Personal Information | Cookie Preferences | Accessibility Statement
ThriftBooks® and the ThriftBooks® logo are registered trademarks of Thrift Books Global, LLC