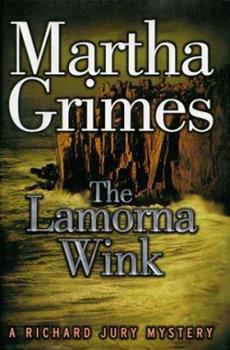 (Book #16 in the Richard Jury Series)

This description may be from another edition of this product. Detective Richard Jury is back in the 16th novel in Martha Grimes' extraordinary New York Times bestselling series--now enmeshed in a series of strange crimes and disappearances, and an age-old...

Yeah for Martha Grimes at her usual best

Published by Thriftbooks.com User , 21 years ago
I was disappointed by the last couple of books in the Richard Jury series, but this one is an excellent book. Melrose Plant is front and centre and he is turning out to be quite the detective. He is one of the most appealing characters I've read about for a long time. Richard Jury's role is reduced as compared to other books, but he comes in at a very crucial time. Macalvie is a wonderful character. There is a danger that he may eventually eclipse Jury. I love Martha Grimes characterization, and her comic relief is always wonderful. She is one of the best mystery writers of today, and is in league with the Dorothy Sayers and Agatha Christies of the past in my mind. No modern author can top her for eccentric characters.

Published by Thriftbooks.com User , 22 years ago
I really liked this book, but I have liked all Martha Grimes' books! After reading so many, I feel like I know the main characters-Melrose Plant, dear Aunt Agatha, Richard Jury and the rest of the bunch. I really enjoyed this book in particular since I had see the "Uninvited" movie referred to in the book.

Martha's latest is a wonderful "cozy" with which to cozy-up.

Published by Thriftbooks.com User , 22 years ago
Martha Grimes maintains near perfect pitch in THE LAMORNA WINK. She has awarded her readers with one of her most balanced narratives. The creative complements and artistics tensions found in Martha's unique blend of puzzle, humor, and atmosphere are evenly sustained throughout this offering. Read Martha's Richard Jury Series at the end of a day that has been too long, when you want to leave the familiar behind and seek quiet enjoyment among the leisured and charming eccentrics who populate these pages. THE LAMORNA WINK is the type of book you read propped-up in bed, wrapped-up in a comforter, with the autumn rain falling steadily atop the roof or the winter wind howling about the house. Let Martha Grimes' characters draw you out of your own world and invite you to join them around the table at the Jack & Hammer. THE LAMORNA WINK is a most satisfying "cozy."

Published by Thriftbooks.com User , 22 years ago
I finished this book in two days. I love Martha Grimes and look forward each year to a new entry in this great series. Once again she offers a interesting mystery, great characters and amusing dialogue. Frankly I was pleased that this book concentrated on Melrose Plant and Brian Macalvie. All the brooding introspection of Richard Jury was getting a little tiresome. It was nice to get some background on these intriquing characters. One quibble: enough already with the romance between Vivian and "Count Dracula." It was amusing in the first few books, but by the 16th it is boring, boring, boring. Ms. Grimes holds out hope though that we may have seen the last of this subplot.

Published by Thriftbooks.com User , 22 years ago
Scotland Yard Superintendent Richard Jury is in Northern Ireland on a case. His friend Melrose Plant remains behind totally bored. The wealthy Plant skims a copy of Country Magazine where he notices an estate that intrigues him. He takes the rail to Cornwell to see the property, which he rents for three months. However, to his utter horror, his aunt arrives at Bletchley Village to stay at a nearby bed and breakfast.Plant realizes his temporary home was the sight of a tragedy. The two Bletchley children were found dead at the bottom of the cliff. The police never uncovered the identity of their killer. Four years after the double murder, another killing occurs in the nearby town of Lamorna. Sada Colthorp, a loose hedonist is the victim. At the same time another person vanishes. Another murder occurs at the local hospice. Commander Brian Macalive feels that a link between the killing of four years ago and the current spree exists. Plant assists Macalive just as he always helped Jury.Although Jury is a secondary character in THE LAMORNA WINK, readers will not miss him as Plant takes center stage, leading to a fascinating and refreshing tale. The taut, intricate who-done-it entertains as much as Martha Grimes, previous works in the series. The jury is in with the verdict that Ms. Grimes has written an enjoyable novel that showcases her ability to focus on a different character than usual, keeping reader interest at a very high level.Harriet Klausner
Copyright © 2020 Thriftbooks.com Terms of Use | Privacy Policy | Do Not Sell My Personal Information | Accessibility Statement
ThriftBooks® and the ThriftBooks® logo are registered trademarks of Thrift Books Global, LLC