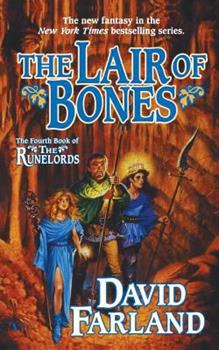 The Lair of Bones

Certain works of fantasy are immediately recognizable as monuments, towering above the rest of the category. They have been written by the likes of Stephen R. Donaldson, Robert Jordan, and Terry Goodkind. Now add to that list David Farland, whose epic fantasy series began with The Runelords , continued in Brotherhood of the Wolf and the New York Time s bestseller Wizardborn , and reaches its peak now in The Lair of Bones . Prince Gaborn, the Earth...

Published by Thriftbooks.com User , 11 years ago
This was my first Kindle book and I really enjoyed it! I have read the other books in the series and found this one to be just as enjoyable as the others. If you have enjoyed the series so far, you will not want to miss this one.

The Lair Of Bones - David Farland

Published by Thriftbooks.com User , 12 years ago
The Runelords books, for me, are addictive. Mr Farland has the ability to move a story along, making it difficult to find a point at which one can put the book down. As a result there has been many a night when I have fallen asleep reading the books. As a storyteller he is first class, with nicely rounded characters, who have faults as well as virtues. None of the characters is either totally black or totally white. His descriptive powers are excellent, making for uncomfortable images at some points and bringing the reader more into the tale the more one reads. One gets to know the players in the stories but there are quite often surprises cropping up which change those characters in one way or another. If you like fantasy and magic these would be books to check out.

The Runelords Saga wraps up?

Published by Thriftbooks.com User , 15 years ago
I was able to read this series from beginning to end in a couple of weeks. It is a remarkable set of books and I highly recommend them to anyone. The concept of transfering an attribute to another is amazing and somehow makes a lot of sense. Farland captures you in the first book The Runelords and does not let you rest until the very end of The Lair of Bones. Absolutly fantastic, take a little while to read this and all the others in this series. It will be worth your time.

Incredible Conclusion to a fantastic series

Published by Thriftbooks.com User , 17 years ago
The Runelord series began a few years ago visiting Fantasy from a totally different perspective. I admit that it took a bit to get used to -- for me at least -- but once I did, I found myself totally absorbed by what I was reading. As I write this, I can think of NO OTHER FANTASY SERIES that uses magic as creatively as does this series of novels. The ability to donate one of your own personal attributes to another is absolutely a stunning piece of creativity in the world of fantasy literature. Everything from your voice, wit, strength, stamina, metabolism, smell and even sight -- all can be transferred from one person to another. The VERY interesting part about doing this is once you have donated, either by force or willingly, ANY attribute to another, you then become a dedicate of the Runelord who is using you. It is up to them to keep you safe, and take care of you as much as possible, and should you happen to die, the Runelord will lose that attribute instantly. Our resident bad guy, Raj, has the attributes of literally thousands of people and animals and is therefore as close to immortal as a human can get. But even though Raj represents an incredible threat to the peace-loving people of the Earth King Gaborn, they both face an even bigger threat from the hoardes of Reavers who have begun to spew forth from the very bowels of the earth to wreak catastrophic chaos and death wherever they go.Virtually each and every character is treated as though they are absolutely pivotal to the plots progression -- because they are. We have more than just a small group of people who take center stage surrounded by many supporting characters, no almost everyone is a main character in their own right. I found this to be incredibly facinating as I began this series, and realized that I enjoyed it very much. Just when you start to wonder what is happening to one person, Farland switches gears and gives us more insight into yet another main character and suddenly the focus of where you THOUGHT the novel was heading goes into a totally different direction. This is what I loved MOST about this entire series, while I could speculate and guess where certain portions of the book would end up, the vast majority of the time I was absolutely unaware of what would happen next. Not on the explosively unpredictable level you might find in George R. R. Martin's 'Song of Ice & Fire' series, but close. The Lair of Bones is where this story takes you. Into the earth (literally) to find the One True master. What more of the mystery behind the Reavers does Averan discover? Do the Reavers prevail? What happens to Raj Ahtan? What is in store for the Earth King and his people? ALL of this is answered in fine fashion within the pages of 'The Lair of Bones'. Farland ties up the loose ends nicely and unlike Robert Jordan who seems to have created such a complex and convoluted storyline that even HE doesn't know where to go next, The Runelord Series has been guide

A more than satisfying installment!

Published by Thriftbooks.com User , 18 years ago
The first books in this series have been both original in their exploration of a new magical device, and captivating because of your connection as a reader to the human story. I was lucky enough to read the first three books in quick succession, and then purchase this last installment. If you have followed this series, you will not be disappointed, there are the signature Farland unexpected twists even in expected situations, there is the valiance of the human (and nonhuman) spirit in the face of overwhelming odds, there is the tension between what is right versus what is expedient in difficult times. I highly recommend this fourth book, and even though it successfully resolves the series, it does leave open wiggle room for a second series if the author so desires....Here's to hoping the author so desires.
Copyright © 2020 Thriftbooks.com Terms of Use | Privacy Policy | Do Not Sell My Personal Information | Accessibility Statement
ThriftBooks® and the ThriftBooks® logo are registered trademarks of Thrift Books Global, LLC