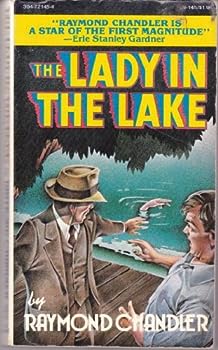 (Book #4 in the Philip Marlowe Series)

A couple of missing wives--one a rich man's and one a poor man's--become the objects of Marlowe's investigation. One of them may have gotten a Mexican divorce and married a gigolo and the other may be dead. Marlowe's not sure he cares about either one, but he's not paid to care.

Published by Thriftbooks.com User , 13 years ago
The Lady in the Lake is one of Chandler's best. Philip Marlowe finds a body--but whose body is it? Laced with Chandler's wry commentary on everything from rich dames to down and out war veterans, this book is an absolute delight from the first page to the last. Classic Chandler. Sharp, funny, full of surprising twists, and always the most original prose around. Highest recommendation for an American "noir" novel.

Published by Thriftbooks.com User , 14 years ago
A 2007 summer reading list mini review. I recently read a book celebrating the 100th birthday of Raymond Chandler. In the book, many current detective writers tell Phillip Marlowe stories and then explain the effect that Marlowe and Chandler had on their careers. The praise was glowing, and I picked up Lady in the Lake, to see if it was warranted. After the first chapter, I had an inkling the praise was justified. After the second, I knew. The story of a Marlowe trailing an executives missing wife is excellent, but it is Chandler's use of language in dialogue that is amazing. The following exchange happens late in the book when a desk clerk uses the word whom and the crusty cop with Chandler is taken aback: Degarmo spun on his heel and looked at me wonderingly. 'Did he say, "whom"?' 'Yeah, but don't hit him' I said. There is such a word.' Degarmo licked his lips. ' I knew there was,' he said ' I often wondered where they kept it. ...' The wise cracking atmosphere through the maze of dead bodies and corrupt officials is why I like Marlowe so much. And while there have been so many imitators through the years, I am amazed how fresh and innovative Chandler seems in comparison. Chandler and Marlowe are definitely worthy of all the acclaim.

Published by Thriftbooks.com User , 15 years ago
I'd agree with just about everybody, this is great stuff by a master. He creates the atmosphere, he gets the style, he's got an endless supply of similes and fabulous bad quips, and of course the characters are terrific. Where this one resides in the canon doesn't interest me too much-I'm just glad he wrote more than Hammett did. What's amusing is that his plots are so complicated that he sometimes loses control of them, most notoriously in TBS. Alcohol probably contributed here. [[SPOILER ALERT: In this one, I couldn't figure out why Talley was apparently at the scene of Florence Almore's death (to steal the slipper), when in fact he'd been hired later by her parents to investigate her death. And then by the end Talley has entirely disappeared from view; we didn't even need him, really. I mean, the bit with the slippers was a bit of a contrivance anyway, I'd say.]] Some of the major plot turns are pretty obvious in this one, also, but that didn't really bother me. Overall it's so entertaining; these are just nitpicks. When I read Chandler, I feel like I'm home. The only problem is, reading him always makes me yearn for a shot of Jameson, and that's not always a good thing.

Murder in the mountains and a lady in the lake...

Published by Thriftbooks.com User , 20 years ago
Another noir classic by the master, in this episode detective Philip Marlowe finds crime as deadly in a lakeside resort as it is on the mean streets of the city of angels, and the body count mounts as the suspense builds and the plot twists. The character development is impeccable, the dialogue lively and bright and suitably sarcastic, and the plotting as convoluted as any Chandler classic would be likely to be. The mountaintop setting for much of the story lends itself to some poetic prose from the sensitive tough-guy with an eye for beauty and an ear for simile. The narrative flows easily as Marlowe unwinds the mystery to it's inevitable conclusion, observing, lamenting, and condemning the corruption and injustice of the American social structure while withholding judgement from even the most vicious and violent, in his typically refreshing blend of cynicism and naivete. The writing is spare and straightforward, but it's an illusion, an act of synergy, for the totality of effect is magnified beyond the sum total of the parts, proving that in literature as in art, less is more.

The book has x-ray eyes

Published by Thriftbooks.com User , 21 years ago
In this absolute literary classic, Philip Marlowe has been asked to look into the disappearance of the straying wife of a local businessman. His search to find her leads him through dead bodies, corrupt police, and wicked women. The amazing thing is that the book doesn't preach, it just sees-- Marlowe witnesses the world with a kind of fatalistic and dispassionate affection-- the things people do to each other; the things people do to themselves. The kind of writing style of which most writers can only dream.
Copyright © 2020 Thriftbooks.com Terms of Use | Privacy Policy | Do Not Sell My Personal Information | Accessibility Statement
ThriftBooks® and the ThriftBooks® logo are registered trademarks of Thrift Books Global, LLC