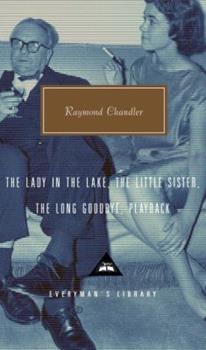 The Lady in the Lake, the Little Sister, the Long Goodbye, Playback

(Book Jacket Status: Jacketed) Creator of the famous Philip Marlowe, Raymond Chandler elevated the American hard-boiled detective genre to an art form. Chandler's last four novels, published here in one volume, offer ample opportunity to savor the unique and utterly compelling fictional world that made his works modern classics. The Lady in the Lake moves Marlowe out of his usual habitat of city streets and into the mountains outside of Los Angeles...

Published by Thriftbooks.com User , 11 years ago
The last few years, I've gotten hooked on Perry Mason reruns on TV, despite their often mediocre plots and their apparently mandatory goofy closing scenes. I guess it is the show's "atmosphere" that I like. I was hoping to find something to read that had that same sort of feeling and that was well-written, and I decided to give Raymond Chandler's novels a try. He wrote about crime in early modern L.A., and critics seemed to revere his writing style, so I thought these were good candidates. Also, I was hoping that they were written long enough ago that things were kept on a PG level, something that practically no fiction written nowadays can seem to manage. I started reading his novels chronographically 3 months ago (in the other Everyman's volume), and I finished the last one (in this volume) last night. These books are definitely page-turners, and it was hard to let a completed novel sink in for a day or two before beginning the next one. Would I recommend them to others? Well, not unreservedly, but I don't feel that the time I spent reading them was wasted. I'm an Austen/Dickens fan, and (if a cross-genre comparison isn't simply absurd) I can't put the quality of Chandler's writing in their class, but he does have an interesting spare style. There are times that the wise-cracking dialogue does come close to self-parody: In _The Big Sleep_ when Marlowe says that someone was talking like he walked out of a gangster movie, I couldn't see much difference between the way that character talked and the way everyone else in the book did. For the most part, my hope for some PG reads was satisfied, although there is a clear drift towards more explicitness as one moves from the early books to the late ones. (That's at least part of why I liked the early ones more.) If Chandler's characters didn't smoke or drink, his books would be about 25% shorter. Are there any children anywhere in the Southland that Marlowe describes? Not that I can remember. The absence of basic human affection was pretty hard for a Dickens fan to take. Marlowe seems to see women as objects to make passes at, to make out with (in the early novels), to bed (in the later ones), and, oh yes, to tolerate as clients. And on the last page of _Playback_ when Chandler does make an attempt to move Marlowe into a lasting relationship, it just rings false. On Perry Mason, you can get a pretty good idea who's going to get murdered before the murder occurs, because it has to be a somewhat unlikeable character. On a lot of other mystery shows, murder is rarely treated as tragic, more as a fun opportunity to solve a good puzzle. At least in Chandler's novels, even though the victims are often unsavory characters, you get a sense that murder is serious--that, as Eastwood said, when you kill a man you "take away all he's got and all he's ever gonna have".

Published by Thriftbooks.com User , 11 years ago
I really enjoyed this collection of novels. And, I think, interestingly, these stories suggest that Chandler was homosexually curious. Note, for instance, how often he talks of a particular man being beautiful, and describes in detail the given man's physical attributes. This awareness only slightly altered my image of Philip Marlowe having a Humphrey Bogart voice and manner. I think a new Philip Marlowe movie that captures this dimension would be fascinating -- the tension between being straight (and macho) and yet having this undercurrent.

Published by Thriftbooks.com User , 15 years ago
I first came across Chandler when I heard the Coen brothers interview and discovered that 'The Big Lebowski' was written in the style of a Chandler novel (name itself being derived from 'The Big Sleep'). This alone interested me enough to buy and read The Big Sleep. Six novels later, I'm still reading Chandler novels, and still finding each and every one different, interesting and intriguing. The main character Marlowe is a wisecracking detective, wary of women - whom he obviously mistrusts - except for the "bad type of women", for whom he does not particularly care. He is also a complex, intelligent man, often an altruist who goes to some extraordinary lengths for his clients, even when he's not paid. Novels are usually set in 30's/40's Hollywood and Bay City (which is since called something else), and are especially nostalgic, if you've lived in the surrounding areas. Chandler's writing is funny and unique - the stories - all told in first person, are written so that the reader is both aware of Marlowe's conscious thoughts, and at the same time, when the ending or some pivotal point in the story arrives - is not. This point is not easy to describe, but it works extremely well - the stories are always amusing, captivating, and suspenseful. I will easily recommend any Chandler novel for anyone interested in mysteries, as well as to those that enjoy unconventional styles of storytelling.

Published by Thriftbooks.com User , 17 years ago
If you don't already have a bookshelf full of Raymond Chandler, Ross McDonald and other excellent mystery writers of those times this is a fine start, three good, solid novels to take up the shelf space of only one. I'd easily give every Raymond Chandler novel he ever penned 5 stars and these are no exception. You won't go wrong reading Chandler mysteries and you won't go wrong with this compact edition of three great books in one.
Copyright © 2020 Thriftbooks.com Terms of Use | Privacy Policy | Do Not Sell My Personal Information | Accessibility Statement
ThriftBooks® and the ThriftBooks® logo are registered trademarks of Thrift Books Global, LLC