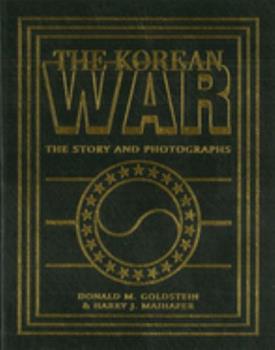 The Korean War: The Story and Photographs

This compelling photographic history examines the war in its entirety, from its causes and protagonists to the strategies, weapons and battles. Goldstein and Maihafer have collected more than 450 vivid photographs, many never before seen by the general public. Published on the fiftieth anniversary of the Korean conflict, The Korean War remembers the experience of the American fighting man in "the forgotten war."

Published by Thriftbooks.com User , 12 years ago
Most of all,It was the Great Work colleting 450 vivid Korean War Photdes among which many photoes never been seen by general publics But many photoes were seen many times before due to Cite from many other books also Cited to Many other books.Well,this book was edited pictures adding narrations for memory of 50th Korean War. One of disappointing areas were Poor Quality of Printing and lack of subjectivity of Narrations. but great advantages are easy understanding of general flow of Korean War ! I like add cause and meaning of 38th Paraelle. 0n the night of 4~5days before the complete liberation from Japanese,V/J day,15,Aug,1945, Col.Dean Rusk,also member of Dept.of State, put the line of 38th Paraelle for prevention of fast advances of Russian Troops who already have greedy desire of occupation of Korea before US Landing ! (later Dean Rusk became Secretary of State during President John F.kennedy)

Published by Thriftbooks.com User , 14 years ago
As we hear about North Korea on the news today it is interesting to go back to see the war as it was actually fought. The Korean War was a sad story of American mistakes. A mistake in a speech led the North Koreans to think we didn't care. The run down condition of the American army in terms of equipment and men can only be called foolish. For an example of this, read about Task Force Smith beginning on Page 30 - this is the Army's equivalent to Pearl Harbor. The Air Force, with it's leaders all being Bomber Boys had forgotten about ground support. This is a great book on the story of the Korean War. It is profusely illustrated with dozens, maybe hundreds of photographs never published before. The commentary that describes the war is written by two retired military officers, one a Korean War vet, the other worked with Gordon Prange on 'At Dawn We Slept' and 'Miracle at Midway.' My only complaint. There are so many pictures that they have to be printed fairly small. I'd have liked the book to be twice as long with the pictures at least twice as large, even if the book cost twice as much. There are a few mistakes in the book, i.e. a T-34 tank identified as a T-33, but they are minor and do not seriously detract from the overall high quality.

THE KOREAN WARsTORY AND pHOTOS

Published by Thriftbooks.com User , 14 years ago
AS A KOREAN WAR VET I FOUND THE BOOK TO BE EXCELLENT IN CONTENT. THE PHOTOS BROUGHT BACK MEMORIES...SOME NOT SO PLEASANT...AND DID CAPTURE MUCH OF THE TRUE FRUSTRATION BUT EVENTUAL JUSTIFICATION OF THAT WAR. IT WOULD BE A VALUABLE ASSIGNMENT FOR ALL THOSE DO-NOTHING MINDS IN WASHINGTON TO READ THIS BOOK AND VISUALIZE JUST WHAT THAT PART OF THE WORLD MIGHT BE LIKE NOW HAD THE U.S. NOT RECOGNIZED THE POTENTIAL AND DONE SOMETHING ABOUT IT. AS INTEL. SGT. IN THE IST CAV DIV., I HAD ACCESS TO INTELLIGENCE FILES THAT INDICATED CAPTURED CHINESE SOLDIERS REPEATEDLY TOLD US THAT THE LONG RANGE PLAN INCLUDED THE FULL OCCUPATION OF SOUTH KOREA AND THEN A MOVE ON TO ALL ISLANDS SOUTH AND VERY LIKELY THE PHILLIPINES. WITH JAPAN NEXT. ALL FOR THE GLORY OF CHINA AND THE COMMUNIST TAKE-OVER OF THE WORLD. GOOD WORK GOLDSTEIN AND MAIHAFER.

Excellent introduction into the Korean War

Published by Thriftbooks.com User , 16 years ago
Unjustly the Korean War is often refered to as the "forgotten war", a war which cost the life of over 54.000 Americans, 59.000 South Korean soldiers and over two million Korean civilians. The cold war turned hot and the repurcussions of this horrible conflict are still felt today and are not limited to the divided peninsular. Authors Donald M. GOLDSTEIN and Harry J. MAIHAFER have done a great job with bringing the Korean war to life in their great visual history. It should be pointed out that co-author MAIHAFER served in Korea (he is featured in two of the photos in the book) and knows first-hand, what he writes about. While the focus of the book is, as the authors state in the introduction, primarily on the American fighting man, the writers give credit where it is due and also detail the brave efforts of the South Koreans and United Nations troops. (It all too often appears in documentaries on the Korean War that the Americans fought the North Korean and Chinese single-handedly.) Likely Korean war buffs will not find much new information here, but keep in mind that THE KOREAN WAR: THE STORY AND PHOTOGRAPHS is more an introduction into the subject, providing the reader with the essential information on the conflict in its 160+ pages. As such it is great. The hundreds of pictures accompany the text nicely. Compelling combat scenes, portraits of the leading men of all sides, weapons (from 3.5 bazookas, machine guns and recoilless rifles to F 80 Fighting Stars and F 86 Sabrejets) and vehicles, aerial bombardments, scenes of the frustrating truce talks at Panmanjom (and much more) bring the Korean War vividly to life. The book is clearly structured, detailing in the first chapter the historical background and giving a geographical overview. The following chapters follow the course of the war, from the outbreak of hostilities on June 25th, 1950 to the retreat to the Pusan perimeter, the amphibious landing at Inchon, the onslaught into North Korean territory in pursuit of the retreating Communists, the advance to the Yalu, the turning of the tide after the intervention of Chinese "volunteers" and the near catastrophe at the Chosin Reservoir, the retreat of the Allied and ROK forces, the stalemate and truce talks and finally the end of the war and its aftermath. My main problem with the book is the lack of maps. There are several maps, unfortunately are not all of them essential, but more important ones are missing. For instance, a map detailing the advance of the Allied forces to the Yalu would be most welcome! (Hence my rating of four stars.) Despite this flaw I hugely recommend THE KOREAN WAR: THE STORY AND PHOTOGRAPHS.

A pictoral history of the Korean War

Published by Thriftbooks.com User , 21 years ago
A divergence from some of the other books by Donald Goldstein, this book is a wonderful collection of photographs and stories of the Korean War. Maihafer and Goldstein do their best to retell the "forgotten war" using some of the best photographs of the war that I have ever seen. This book is a pictoral history and as such is not a comprehensive study of the war. Nevertheless it accomplishes its objectives well and is a must have for Korean War buffs.
Copyright © 2020 Thriftbooks.com Terms of Use | Privacy Policy | Do Not Sell My Personal Information | Accessibility Statement
ThriftBooks® and the ThriftBooks® logo are registered trademarks of Thrift Books Global, LLC