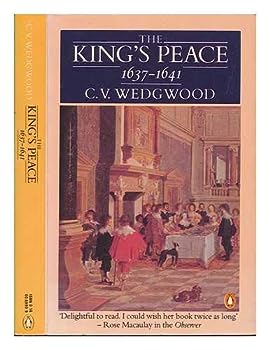 (Book #1 in the The Great Rebellion Series)

This description may be from another edition of this product. This volume tells the story of the four eventful years which immediately preceded the Civil War, years which transformed the tranquil dominions of King Charles into a land rent by mistrust and menaced...

Published by Thriftbooks.com User , 16 years ago
This is the first of two books that cover the period from 1637 to 1647; the second is "The King's War". The two should be regarded almost as a single (very long) book: only someone already expert on the history of the period would read the second one without the first. The book opens with Charles I having been on the throne for thirteen years. England and Scotland have been one united Kingdom for only twenty years longer than that. There is religious sectarianism of multiple kinds. There is financial pressure from the King's taxes. The King believes he rules by divine right. Parliament, when the King is willing to call it together, disagrees, and will not cooperate with the King. These threads, and others, will inevitably lead the kingdom to war over the next ten years. Wedgwood starts with almost two hundred pages of setting the stage: what was Britain like in 1637? The survey is thorough--science, taxation policy, religion, economics, court politics, education, social conditions, health, trade, the Church, the state of Ireland--and is well enough written. It does feel a bit like doing one's homework so as to be ready for the rest of the book, but it pays off amply in aiding comprehension of the later events. After this opening section, Wedgwood starts the story, beginning in mid-1637. In both books, she takes the slightly unusual approach of sticking very closely to a linear narrative of the events, instead of providing an overview and filling in details. She doesn't jump ahead and tell you how an intrigue is going to turn out, and this greatly increases the interest of the innumerable political twists and turns. Charles was not the cleverest British King, and had a weakness for over-complication and multiple plots; Wedgwood recounts them and the counters to them from Parliament as they happen, day by day, and it makes for fascinating reading. Wedgwood writes clearly and without too much ornamentation, though her style is not at all simplified. It is plain throughout that she loves her subject and knows all the characters intimately, and this enthusiasm and insight easily transmits itself to the reader.
Copyright © 2020 Thriftbooks.com Terms of Use | Privacy Policy | Do Not Sell My Personal Information | Accessibility Statement
ThriftBooks® and the ThriftBooks® logo are registered trademarks of Thrift Books Global, LLC