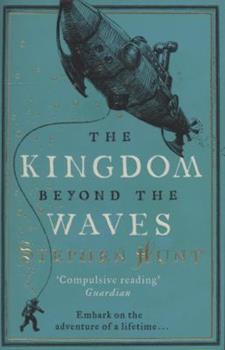 Kingdom Beyond the Waves

(Book #2 in the Jackelian Series)

Professor Amelia Harsh is obsessed with finding the lost civilization of Camlantis, a legendary city from pre-history that is said to have conquered hunger, war, and disease with the creation of the... This description may be from another edition of this product.

Steampunk at its best

Published by Thriftbooks.com User , 12 years ago
Professor Amelia Harsh has lost her tenure at the last university in Jackals that would hire her (after being fired by the other seven...). Why? Because instead of studying and writing papers like a normal university professor, she's out hunting relics of Camlantis, which everyone knows is a myth. Enter Abraham Quest, the richest man in Jackals, who has been doing his own archaeology on the sly, and found proof that Camlantis exists. Unfortunately, the clues point the way into the heart of darkness itself, the source of the Shedarkshe river in the wilds of a jungle from which no explorer has returned. Camlantis was a utopia, with untold engineering feats, a society of pacifists, and Amelia and Abraham are convinced that it holds the key to making their own war-torn society a better place. But it means risking lives in order to see that goal realized. Hunt spends the first half of the book setting up the story, and because there's a lot going on, several characters to introduce, and a world to build, the time it takes to do this isn't unreasonable. However, it does make the first half slow-going. His prose can be dense, which also slows down the pacing and flow, but does make for a richer world. I love Hunt's metaphors. He is truly clever with his descriptions, adding depth to the world at the same time. Finally at about the halfway mark everything goes wrong for our protagonists. And not just wrong, I mean horribly, how in the heck are they going to get out of this without dying, wrong. It's a series of life-threatening events that lasts the entire second half of the book. Hunt spins threads between all the characters deftly, so that when everything begins to collide, the weaving stories makes sense despite the chaos. Awesomeness on many levels. Set in an Earth that could have been, Hunt mixes machinery, magic, and a dizzying assortment of races with alacrity. There's the race of mechanical steammen, who, while they have no country to call their own, still have autonomy wherever they live. There's the amphibian craynarbians, which unfortunately don't get as much face-time as the others. Also, the flying lizard lashites, who turn out to play an important role. In a story like this the races could have been gimmicky, but the cultures of humans and non-humans alike were all integrated into the plot in satisfying ways. Hunt's steampunk world is ambitious, and while he does an excellent job of introducing it without overwhelming the reader, about 5% of the time I didn't remember or understand a name, race, or piece of equipment. On the whole for such a steep learning curve, only forgetting a small percentage is a petty complaint, and says a lot about the author's world-building, which is complex and fascinating. Magic plays a secondary role to the mechanical, which made me sad because Hunt hints at interesting possibilities he simply doesn't have time to explain or explore. Also, while the pacing is consistent, the flow of action can be ja

Published by Thriftbooks.com User , 12 years ago
When Tolkein came out with his Middle Earth, it was complex, well-developed, and unlike anything else anyone had ever done. This is how I feel about Stephen Hunt's world in The Kingdom Beyond the Waves. Strangely familiar cultures are presented in refreshing ways, but the history and depth of the geography is mind-boggeling. Hunt's world is conceivably what ours will look like in a few hundred thousand years from now, with archeologists discovering our own artifacts and mistakes. The characters are multi-faceted with flaws and real motivations Hunt reveals to us slowly, like opening up a present. This is the first of Hunt's books I've read, and while it stands alone wonderfully, it also makes me thirsty to go back and read them all. It is dense, so make sure you have some time on your hands before picking it up.

Another home run from Stephen Hunt

Published by Thriftbooks.com User , 12 years ago
The Court of the Air was a massive undertaking that established the Jackelian universe and all its idiosyncracies. A fantastic tale in its own right, a lot of that book was devoted to building a world where Hunt's innovative and offbeat characters and systems could properly function and be understood. Not so with the The Kingdom Beyond the Waves. It jumps right into a tight-knit adventure story whose gears mesh perfectly with the beautiful world Hunt has created. From the Indiana Jones-esque prelude to the smart and well-situated conclusions for each character, Hunt has definitely found a new gear with this book. Some of the characters will be familiar to readers of the Court of the Air, but no cheesy cameos exist here. Everything and everyone is here for a reason and the entire project is woven together beautifully using a unique set of rules. Hunt is really very good at creating an original, twisty plot that takes advantage of a different look, feel and rule set. However, because the universe is so different, I definitely would recommend reading the Court of the Air prior to the KBTW. Not only is COTA a great book, but you need to understand this universe to really get the most out of KBTW. It's very rare for me to laugh, cry and feel this much excitement from one book, but Stephen Hunt has done it for me again. Go for it, it's an extremely rewarding piece of fiction.

Excellent follow-up to Court of the Air

Published by Thriftbooks.com User , 12 years ago
I agree that this is a more smoothly written book than CotA...which I also liked quite a bit. Very well written and entertaining, with a little carryover from CotA. I strongly recommend it

Published by Thriftbooks.com User , 12 years ago
All right, I admit it at the start...I'm a big fan. This is the second installment of Stephen Hunt's slam bam steampunk/adventure series, and now I can't wait for "The Rise of the Iron Moon"'s American release. The novels are character-driven adventures set in an imaginary world whose center is the nation of Jackals, a nation not unlike England. Because this is steampunk, Jackals is a coal-driven quasi-Charles Dickens era society of floating airships and gas lamps--a modern, but not too modern, society. The heroes are at once likeable and sympathetic, be they children with hidden bloodlines or strong men with anvils for hands or eccentric mechanical steammen or orphans with exoskeletons. Both novels are set in motion almost immediately--in the manner of an Indiana Jones movie--and what follows is a rich mixture of political intrigue, dark magic, and reprehensible rogues. There is almost no down time in either book--they propel themselves with the force of a steamroller until the final pages. If there are any complaints leveled at Hunt's works, it's that he can be VERY ambitious. I thought that the climax of his first book, "The Court of the Air," was maybe too big, too spectacular. It had as many plot threads as a Tom Clancy novel, and when you marry that with a whole new planet of cultures, characters, and conflicts, it can and did get pretty hairy. But "The Kingdom Beyond the Waves" is much tighter, from start to finish. There is no shortage of action...it's rare to have a dozen pages slip by without a big revelation or a reversal of fortune, but the story is always gripping and credible--a heady task, given that earth quake-like forces can propel whole cities into the upper atmosphere: three-eyed reptiles can talk and fly; and...well, you get the picture. In short: disgraced professor Amelia Harsh has just about given up on her father's quest--finding the ancient lost civilization of Camlantis--when a rich benefactor appears: Abraham Quest, the man who drove her father to ruin. As her options are limited, she gathers a crew composed of convicted slave traders and steroidally enhanced female soldiers and they board a refitted u-boat to sneak up the Shedarkshe river into the Daggish territory, a brutal jungle where all intruders run the risk of being forcibly assimilated into an animal-plant hive called the Greenmesh. On the way she must deal with a saboteur, a mutinous crew, and a growing awareness that secrets have been kept from her, and the true purpose of her expedition will not only endanger her life, but the lives and destiny of her entire world. If you can't tell, Hunt's imagination is almost limitless, and there is no end of intrigue and plot twists throughout. And it's FUN to read...in fact, I had to keep telling myself to slow down, to savor. I like how he spreads it around, too: his female characters are every bit the equal of the males, and it is a mark of a gifted writer that even mechanical men are gIven as much pers
Trustpilot
Copyright © 2022 Thriftbooks.com Terms of Use | Privacy Policy | Do Not Sell or Share My Personal Information | Accessibility Statement
ThriftBooks® and the ThriftBooks® logo are registered trademarks of Thrift Books Global, LLC