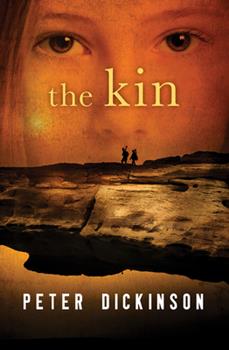 (Part of the The Kin Series)

Four children embark on a quest for a new land at the dawn of human history Africa, two hundred thousand years ago: Suth and Noli were orphaned the night the murderous strangers came, speaking an unfamiliar language and bringing violence to the peaceful Moonhawk tribe. Determined not to die in the desert, Suth and Noli slip away with Ko and Mana. Suth, the eldest, leads them; Noli's dreams of the future guide them. Ko gives them courage; Mana gives...

Published by Thriftbooks.com User , 13 years ago
The Kin is a fabulous book for those who wish to better understand prehistory. It follows a group of four children who separate from their Kin because food has run out. They travel to find others. Not only a coming-of-age narrative, but a great insight on how early people lived. The chapters are interspersed with folk stories about the creation of different animals in a storyteller's mode.

Not Just for "Young Adults"

Published by Thriftbooks.com User , 15 years ago
The "Reading Level" for this book is listed as Young Adult, but the content, style and level of complexity should not be thought of as aimed at or restricted to teens. This is an outstanding and thoroughly engaging book, carefully thought out and written. If you have an interest in early man - or even if you don't -, you will enjoy it. I am far from being a teen, but I have re-read it several times for pure pleasure.

Published by Thriftbooks.com User , 16 years ago
I read a lot of books but, this was the first book I had pulled out of the "Teen" section at my local bookstore. I just have to say I wasn't disappointed it's a great book but, it could be improved(oh so now I'm the expert). Lets start with Book 1 "Suth's Story". Peter Dickinson did a superior job in devoloping the character of Suth because he shows three sides to this teenage kin the first is his fatherly side the side that helps him raise Ko and Mana. He shows an adventurous side the one that makes him run away from his kin tribe and start his own life. The final side is that of a warrior this is shown when Suth kills the leopard and also when he attacks the cliff hawk in the very beginning! The main thing about "Suth's Story" is the Monkey kin and what goes on in the valley. I think this because that particular part shows the fatherly side of Suth when he is desperate to save his family. Now for Book 2 "Noli's Story". This time Dickinson gives the main character (Noli) two sides and they are the "Day Noli" and the "Night Noli". The "Day Noli" is a regular kin woman she feeds Otan (her baby brother) she gathers crops and she cooks (not much more to be said about that). The "Night Noli" is the one that has visions of the "First Ones" like Moonhawk and Goma's "First One" I think this side is shown everytime Noli gets that spaced out look on her face. I think Noli is the most important character in the book. I can't forget Book 3 and Book 4 which are "Ko's Story" and "Mana's Story". Ko and Mana are the exact oposites from ko's rambunctious ways to Mana's shy attitude.Ko has two sides and they are "Normal Ko" and "Dreaming Ko", the Ko that dreams is the central comedie of the story and normal ko is the perfect mirror of a young sugar-high boy. Mana on the other hand is "Shy Mana" and "Brave Mana", "Brave Mana" is the one at the end of the story who defeats the demon-man and that adds a nice twist to the ending. There is one thing missing, another book, "Tinu's Story"

Published by Thriftbooks.com User , 16 years ago
This wonderful book used to consist of four smaller books describing the life of a tribe of early humans. I was lucky enough to come across a battered copy of Nora's tale in a used book store. After reading it I knew I had to get the other three books. The books were long out of print and I was unable to obtain any others until now. After rereading Nora's tale countless times, I was overjoyed to find a complete collection of the books in print. I was delighted with the story line which is an original historical fiction with a hint of fantasy. However, this book is by far Peter Dickinson's best. I was ghastly disappointed with all of his others.

Published by Thriftbooks.com User , 18 years ago
This book is probably one of the best books I have ever read. It is about a small group of children who become separated from their Kin, Moonhawk (the Kins are tribes, each named after an animal, for example the Monkey Kin.) They set out to find Good Places, where there is food and water. But a number of terrifying perils face them, including volcanoes, enchantments, and evil demon men. This book is also fascinating. Not a lot is known about this era, and Peter Dickinson has pieced together an enchanting four-part novel from fragments of evidence and his own wonderful imagination.
Copyright © 2020 Thriftbooks.com Terms of Use | Privacy Policy | Do Not Sell My Personal Information | Accessibility Statement
ThriftBooks® and the ThriftBooks® logo are registered trademarks of Thrift Books Global, LLC