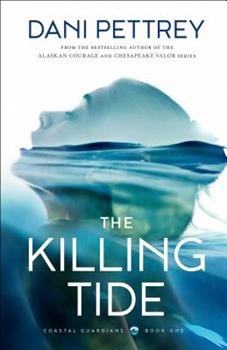 (Book #1 in the Coastal Guardians Series)

When a Coast Guard officer is found dead and another goes missing, special agent Finn Walker faces his most dangerous assignment yet. Complicating matters is the arrival of investigative reporter Gabby Rowley, who's on a mission to discover the truth. Can they ignore the sparks between them and track down this elusive killer?

Published by Kim Potter , 1 year ago
The Killing Tide by Dani Pettrey is the first book in her Coastal Guardians series. Investigative reporter, Gabby Rowley’s life is in danger from the drug lord that she helped send to prison. Her brother, a Coast Guard Investigative Service agent, enlists his team to help keep an eye on Gabby and keep her safe until the threat on life is over. Gabby gets involved in the Coast Guards newest case where her life is even more in danger. To me, Gabby was a little irresponsible. Always endangering others without thinking about the consequences. There were a lot of heated kisses and attraction in this story. But, there was a lot of danger and suspense with several plot twists and an ending you never saw coming! I received this book from Celebrate-Lit for my honest review.

The Trifecta of Reading Pleasure - Suspense, Intrigue, and Romance

Published by LisaK2019 , 2 years ago
Dani Pettrey’s latest novel is a trifecta of reading pleasure. There’s suspense, intrigue, and romance. Who doesn’t like that combination? Add in some really bad guys, two engaging and likable characters (Finn and Gabby), and you have the recipe for a “can’t put it down until it’s finished” novel. There is a faith element in the book, which if you’ve read any of Pettrey’s other books is always present. I like the Christian element, but I don’t think it’s preachy. You never have to worry about anything foul or gratuitous in her books. The mystery is tight, and if you’re like me you won’t know the true bad guy until the end. Definitely worth your time to read.
Copyright © 2022 Thriftbooks.com Terms of Use | Privacy Policy | Do Not Sell My Personal Information | Accessibility Statement
ThriftBooks® and the ThriftBooks® logo are registered trademarks of Thrift Books Global, LLC