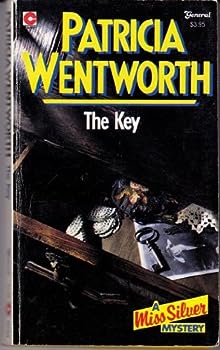 (Book #8 in the Miss Silver Series)

This description may be from another edition of this product. An end to WW2 is in sight, and Michael Harsch has been working for the government on a secret project for years. Finally he is ready to hand over his formula. But the next morning he is dead. It looks...

Published by Thriftbooks.com User , 12 years ago
Miss Maud Silver's knitting needles carry khaki wool in this murder mystery, for it is 1944 and wartime. On Page One we meet a scientist who believes he has perfected a formula which he can deliver to the government the following day. Tired and thirsty, he decides to visit a tea shop before catching the train. Something happens when he enters. Did he recognize someone? Did someone recognize him? From that unplanned and random event develops a mystery that involves the death of the scientist the following day and ultimately the keen attention of retired governess - "Isn't she marvellous!" - Miss Silver. You'll find a soothing and satisfying mix of ingredients here: party-line telephones, church organs, village gossip, missing keys, secret marriages, and eavesdropping servants. It is all of great interest to Miss Silver, who finds a line from "dear Lord Tennyson" to illuminate every situation, and whose mind, as sharp as her knitting needles, eventually finds the key that unlocks the mystery.

The mystery is "The Key".

Published by Thriftbooks.com User , 15 years ago
Patricia Wentworth books are good, old fashioned mystery stories. Her emphasis is always on the mystery. Everything else in the story is merely dressing to clothe the murder (or usually multiple murders) in the mystery. In this story the key referred to in the title was the actual key to the church in the village. All action and discussion had to center on finding out who had access to the four church keys and were each of those keys were when the murder was committed. I love the way Wentworth always has two stories in her mysteries. The first story is an explanation of what happened to the murder victim and how the crime was committed. The second story is how everything changes when Miss Maude Silver arrives on the scene and becomes involved in the case. She takes information which everyone believed to be the solution and turns all the facts upside down while uncovering the real killer. A Miss Silver mystery follows a formula which becomes obvious after you have read the second story. A murder takes place, things are not anywhere close to what they seem to be, a man and woman will be involved in a very gentle romance, Miss Silver will be called in and will solve the case. Even knowing that it will be written to formula I still love these stories. This particular one was written in 1946 and most of Patricia Wentworth's writings took place during this time. A large number (maybe even all) of her mysteries have some connection to the Second World War - some connections more prominent than others - and we see from yet another angle the impact of that horrible conflict on the lives of all who lived through it. My thought is that any Miss Silver book is a good story. It is fascinating to see how the very structured British class system is utilized to tie all these major characters together. Someone always knows someone who knew someone who had Miss Silver come to solve a mystery for them. The stories usually refer to previous cases Miss Silver has been involved in and I love to go find that book and reread it to refresh my memory. I used to think this population linkage was not possible until I sat down one day and realized how impossible it is for me to leave my house in my own little corner of the world without seeing or meeting someone I know. Please, if you are interested in an old fashioned, comfortable mystery story, read any Patricia Wentworth book. She also wrote many books which do not have a "featured" detective and those are wonderful too. Full of period atmosphere and wonderful good/bad characters. You will enjoy these books if you remember when they were written and don't try to judge them outside their time period.
Copyright © 2020 Thriftbooks.com Terms of Use | Privacy Policy | Do Not Sell My Personal Information | Accessibility Statement
ThriftBooks® and the ThriftBooks® logo are registered trademarks of Thrift Books Global, LLC