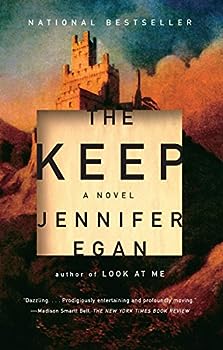 This description may be from another edition of this product. Award-winning author Jennifer Egan brilliantly conjures a world from which escape is impossible and where the keep -the tower, the last stand -is both everything worth protecting and the very thing...

Published by Thriftbooks.com User , 14 years ago
Danny and Howard are cousins. They were best friends as small children, but as they grew up, they also grew apart. One day, on a family outing, Danny and one of his other cousins decide to play a joke on Howard. They lead him into a deep, dark cave, and Danny pushes him into a pool deep within and runs away, leaving Howard alone and afraid, only to be found three days later, a much-changed young man. Now Danny is 36 and has been asked by Howard, whom he hasn't talked to in years, to come to Europe to help renovate an old castle that Howard hopes to turn into an innovative hotel. Meanwhile, Ray, a murderer in prison, is telling this story during his writing class, in which he has a large crush on his instructor, Holly. A crush which never leaves his mind, and which gets him through each and every day. How do these separate narratives connect? In a stunning finale that will have your jaw on the floor, the stories come together in a catastrophic way that completely blindsided me. I'm a huge fan of experiments in narrative. Lately, I've been on an unreliable narrator kick, specifically. Just anything that can seem fresh in the world of literary fiction. And The Keep is definitely one of the most interesting books I've ever read in terms of narrative structure. We know Ray is telling this story, but we don't know if it's just a story that Ray is making up as he goes, or if it really happened somewhere sometime. As the novel switches between telling Danny's story at the castle and telling Ray's story at the prison, the reader is left somewhat confused but also completely ensnared by Jennifer Egan's ability to paint some amazingly flawed characters who drive the story along by succumbing to their natural desires or flaws, even though they know better. The novel is somewhat an examination of how much our past haunts us. The incident between Danny and Howard in the cave is always on Danny's mind, almost dropping him to the point of being a paranoid schizophrenic. Even though Howard has moved on since that day, and become an ultra-successful businessman, Danny still believes that Howard harbors hatred toward him, and this belief alters Danny's decision-making throughout the book. Ray's past also haunts him, even in the most simplistic terms of the fact that his past is what put him in the place he is now: jail. His past affects him in some more profound ways than the reader even knows until the end of the novel. Everyone knows the cliche that "you can't escape your past," but Egan shows how one singular event years ago can affect people for the rest of their life, whether it is for better or for worse. Some of the novel also seems to ask questions about our society's dependence on communication technology: cellphones, blackberries, wireless internet, etc. Danny is a New York guy who is completely dependent on communicating with the outside world, and the fact that Howard wants his new hotel to be completely devoid of communication

Published by Thriftbooks.com User , 15 years ago
I read the other comments about this book, and Yes, the story jumps between characters and points of view, and yes, it takes some time to put all of the pieces in place, but I thought those were the things that made this book truly remarkable. It was thought-provoking and engaging; rather than just reading the story, I felt drawn in, trying to figure out what was going on and what was going to happen. The plot twists and turns, taking on a life of its own. I couldn't put this book down and would highly reeocmmend it.

So Much Better than I Expected

Published by Thriftbooks.com User , 15 years ago
As the story opens Danny is traveling to a gothic castle in Europe. He's been invited there by his cousin Howie, who is going to turn the Castle into the ultimate spiritual retreat. His cousin's invite could not have come at a more opportune time, as Danny had a run in with the mob back in NYC, so getting out of town sort of seemed like the right thing to do. As children they were very close, but when Howie started going overboard on Dungeons and Dragons, Danny moved away from him, turned to sports and became a soccer star in high school. However sadly, when Danny made the break from Howie back when they were kids he did a bad thing. Maybe it was nothing more than a childhood prank, but it left Howie lost in a series of caves for three days and this was the beginning of bad times for him, leading to drugs, crime and eventually reform school. Twenty years later Howie is the successful one. He's a retired bond trader, made a bundle, while the high school soccer star has turned into a very paranoid individual who has failed at everything he's set his hands to. However, failure though he may be, Danny is an information addict and when he shows up at the castle his luggage carries everything he needs to keep himself plugged into the information highway. Danny, who is obsessed by power, seems never to be able to achieve it. He sees it, senses it, but it's always been beyond his grasp. Howie, in sharp contrast to Danny, wants nothing to do with the internet, the information age, the cyber highway. He wants his castle, retreat hotel completely purged. He wants no video games, no internet Dungeons and Dragons. He wants his spiritual place to be just that spiritual, with sort of an older magic. Enter the Baroness, who is older than God and tuned into her ancestors. With her help Howie wants to create a place where witches would feel at home and this threatens all heck out of Danny. Can Danny survive in this world Howie is creating? Will old wounds and bitter memories rise and strike deep in to the new bond being formed by Howie and Danny? Will they form a bond? Can they? And there is so much more to Jennifer Egan's wonderful story. Characters so real, with pasts that live, with a future uncertain. This is a different kind of book. I don't know what I was expecting with I started it, but this wasn't it. This was so much better. Reviewed by Stephanie Sane

Published by Thriftbooks.com User , 15 years ago
I found the lazy, amused, just-making-this-up-as-I-go tone pretty intriguing right from the start. It almost felt like Aimee Bender (Girl in the Flammable Skirt, Willful Creatures) and it promised to get weird at any moment. What hooked me was watching an accidental writer--the narrator's a prisoner who signs up for a creative writing class to get away from his cellmate--slowly begin to take his writing and his story more seriously. He almost laughs at his writing instructor's suggestion that his imagination can take him wherever he wants to go. "I've heard some cheesy motivational speeches in my time, but that one's a doozy. A door in our heads, come on. But while she was talking I felt something pop in my chest." (18) He trusts his body, what he feels, and just begins to go with it. The story he writes, the story of his writing class, and eventually the story of his writing instructor each hinge on moments like this, moments of letting go, of moving beyond our routine patterns of thought, beyond autopilot, and opening up to the possibility that there are other ways of understanding, other ways of discovering, that lead us beyond what we think we know for certain. Each shift from the castle story to the prison story often feels like one more door opening, like we've been let into a room we hadn't really suspected was there and suddenly we find ourselves seeing things in ways we hadn't imagined. Part three works beautifully this way--we almost feel like we're in a new story (this reminds me a little of Tobias Woolf in Bullet in the Brain--the shift from the bank robbery to the final string of memories and also his Old School--the shift from the Frost section to the Rand section to the Hemingway section). The whole thing feels a bit like a zen exercise, literature as a game to wake us up. Beginner's mind, baby. We should be grateful for anything that helps us get there.

Brilliant modern gothic. Prepare youself to get lost in the labyrinth of The Keep.

Published by Thriftbooks.com User , 15 years ago
Jennifer Egan's third novel opens with neo-punk cyber-junkie main character Danny arriving at his cousin Howie's dilapidated European castle. Howie couldn't even pin down which country the castle is in--Austria, Germany, or the Czech Republic--"because the borders are constantly sliding around." Howie's dream is to create the ultimate spiritual retreat, a place to escape from modern conveniences and telecommunications and commune with higher powers. Lost soul Danny is not receptive to this idea; at least until he spots a young, blonde apparition in the Keep, the inaccessible tower of the castle that serves as "the last stand, the final holdout. It's what you protect, and where you run to when the walls are breached." Danny accepted plane tickets from his cousin as an escape route from his troubles with mobsters back in New York, but he rejected the physical isolation of the castle by bringing along his own bulky satellite phone. Howie and Danny have a tumultuous past relationship, ever since Danny played a childhood prank that went terribly wrong. Danny has nagging doubts about Howie's motives for summoning him to his castle-in-transformation, and as strange events unfold, he's not sure who to trust and what is authentic. (It doesn't help that he's naturally predisposed to paranoia, of course.) Early on, Egan tosses in another aspect to the story: it is actually a creative writing task for a hardened prisoner. Our author, Ray, only joined the writing class to escape his cell, but his fictional work takes on a life of his own, especially after he develops a connection with his fragile, recovering teacher. He empathizes his character Danny, but he makes it clear that Danny isn't a self-portrait. The narrative about Danny and the ghosts of the Keep smoothly parallels Ray's struggles in prison, and subtle connections can be made between the plot twists in both Ray and Danny's lives. The stories converge in a natural manner (yes, Egan can make the supernatural entirely real). The Keep is one of the best books of the year, and it's nearly impossible for a reviewer to re-create the experience in a few short paragraphs. Go ahead and pick this one up to see for youself!
Copyright © 2020 Thriftbooks.com Terms of Use | Privacy Policy | Do Not Sell My Personal Information | Accessibility Statement
ThriftBooks® and the ThriftBooks® logo are registered trademarks of Thrift Books Global, LLC