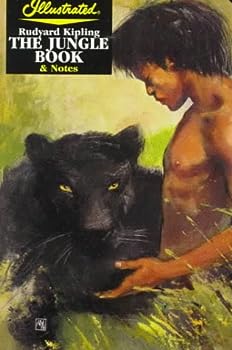 "Spectacular, full-color watercolor paintings by the late American illustrator Don Daily bring this presentation of the classic story to life in an exciting new way. Readers ages 4 to 8 will delight in"

Published by Thriftbook user , 1 year ago
I did not mean to give the Jungle book by Rudyard Kipling 1 star. Very disappointed that I did not receive what I ordered.

Published by Thriftbooks.com User , 12 years ago
This collection is probably the single best starting place for reading Kipling, especially for younger or teen readers (though the very youngest would probably enjoy his _Just So Stories_ more). These stories are great reads, enjoyable by all ages. Fans of the movie will find a more complex work here -- not "darker," but more ambiguous; the three stories from this collection that have generally been adapted into other media, and that most readers think of when they think of "The Jungle Book", focus on outcast human infant, Mowgli, who is abandoned as an infant in the jungle and raised by wolves, and primarily tell the story of his search for a "place" within the wolf pack, the Jungle, and the human world, and his outsider status in all three realms. Perhaps because they focus almost entirely on the Indian jungle, or perhaps because they're aimed at children, these stories are also largely free of the undertone (overtone?) of imperialism that runs through much of Kipling's work for adults. It has, of course, been massively influential on later writers, from Edgar Rice Burrough's _Tarzan_ to Neil Gaiman's _The Graveyard Book_. The various morals contained within the "Mowgli" stories were also taken as a motivational book within the Scouting movement (reading this helped me understand why I had to memorize "Akela" when I was a cub scout). While only three stories in this collection focus on Mowgli, Kipling did write a second collection, "The Second Jungle Book," which is almost entirely comprised of Mowgli stories, and which I would highly recommend if you like these tales. If you want to read more of Kipling's work for adults, I'd recommend either "The Man Who Would be King" or the short story collection "Plain Tales from the Hills," both of which should be available for free online. As to formatting of this kindle edition: there are blocks of Kipling's poetry in between the stories, some of which was difficult to read as the formatting had not carried over well to this Kindle edition. Not a critical issue, but Kipling's poetry is excellent and the formatting errors were annoying.

Published by Thriftbooks.com User , 12 years ago
Legends are made from legends. Rudyard Kipling dug deep into the tales of the jungle from his years living in India, and drew from them the kinds of stories that live forever. "The Jungle Book" is more than how Mowgli, the man cub, learns to live and survive amongst enemies like Shere Khan. The intense mongoose vs cobra "Rikki-Tikki-Tavi," also well-known, is here, as are several lesser-known and unrelated adventures. Richly written, with details and contexts unfamiliar to Western readers, "The Jungle Book" lifts imagination and language beautifully. Poetic, and written in a literary style, it shines above most modern prose. This is the stuff of afternoon stories read to older boys and girls. Young teens will while away rainy evenings, unwilling to part until finished. Sometimes scary and always exciting, Kipling also uses the book to teach lessons much greater than a jungle in India. When chapters were first read to me many years ago, I listened gawk-eyed, listening intently for as long as my mother would read. I read it with different eyes now, but no less a young boy as I worry how Baloo will handle the Bandar-Log monkeys. It isn't perfect. A few scientific details are fudged (wolf pack breeding structure, for example), but nothing that matters in the big picture. Kipling will have you in the palm of his hand, even though it was first published over 100 years ago. May "The Jungle Book" by Rudyard Kipling be as amazing to you as it has been to me. --Brockeim

Kipling for goodness sake! And better than a movie!

Published by Thriftbooks.com User , 12 years ago
You will be sold on Kipling. And you may never settle for the movie afterwards; Jungle Book lives and breaths on its own.

Published by Thriftbooks.com User , 18 years ago
The Jungle BookWhen we say "The Jungle Book" most of us invariably think of Disney's films, both animated and live action, that have become the norm for Rudyard Kipling's immortal children's stories. While the Disney interpretation is fun and enchanting, it makes a dramatic departure from the actual stories and takes considerable creative license in telling just a part of the Kipling stories. Even what we get from Disney falls considerably short of the applicable parts of Kipling's original that Disney used. What? Kaa, the snake, as Mowgli's friend and powerful ally? What? A deeper story of Mowgli's experience as a wolf and his relationships with Mother wolf and Father wolf? Oh yes, much, much more.Kipling's original masterpiece also includes several other wonderful chapters about the continuing adventures of Mowgli and also adds the marvelous tale of "Rikki-Tikki-Tavi," the heroic mongoose whose battles with wicked cobras in an Indian garden easily matches Mowgli's showdowns with Shere Khan.The book also includes the tale of "The White Seal." This short chapter of "The Jungle Book(s)" provides a wonderful commentary, in the form of animal parable, on human society, competition, male ego and human pride. Our hero, Kotick, the white seal, through his fearless explorations and his willingness to fight for a dream, changes the minds of his parents, his peers and his society for the better. The invitation to each of us is very clear to find and free the white seal that exists in all of us.Don't get balled up in the notion that "The Jungle Book" is just for kids. A look beneath Kipling's wonderful prose reveals, like most great children's classics, that the author is using the unintimidating forum of children's literature to speak to kids of all ages with the hope that somehow we'll all finally get it.Buy the book, read it, read it to the kids you know and learn the lesson.Douglas McAllister

Learn the Jungle Law, it's still in effect

Published by Thriftbooks.com User , 22 years ago
The story of Mowgli, a boy raised by wolves in the jungles of 19th century India, charmed me when I was young no less than it does today. Kipling wrote this to celebrate his love of India and it's wild animals as well as to show again some of his frequent themes of honor, loyalty, and perserverance. While his writing may seem 'dated' to some, to others the truths he includes rise above politics and 'current correctness'. Baloo the Bear, Shere Khan the Tiger, Bagheera the Panther, Kaa the Python were all childhood friends of mine, and reading these Jungle Book stories to your own children today will result in their exposure to such old fashioned concepts as sticking by your friends in adversity, helping your family, relying on yourself. Good lessons then, good lessons now. Mowgli learns the value of 'good manners' early on, learns that 'all play and no work' leads to unexpected troubles, learns that thoughtless actions can have devasting consequences. By showing Mowgli in an often dangerous 'all animal' world, we see reflections of modern human problems presented in a more subtle light. Kipling leads children down the jungle path into adventures beyond their day to day imagining and along the way, he weaves subtle points in and out of the stories, he shows the value of 'doing for yourself', of 'learning who to trust'. All of this in a tale of childhood adventure that's never been equaled. The book is over 100 years old now, and there are terms & concepts from the age of Empire that aren't 'correct' today. Parents can edit as needed as they read bedtime stories, but I've found that children learn early on that the world changes, and that some ideas that were popular long ago did not prove to be correct. Explaining this, too, is a part of parenting. Some of our current popular ideas may not stand the test of time, but I suspect that 100 years from now parents will still read the Jungle Book to their children. And the children will still be charmed, thrilled and instructed in valuable life-lessons.
Copyright © 2022 Thriftbooks.com Terms of Use | Privacy Policy | Do Not Sell My Personal Information | Accessibility Statement
ThriftBooks® and the ThriftBooks® logo are registered trademarks of Thrift Books Global, LLC