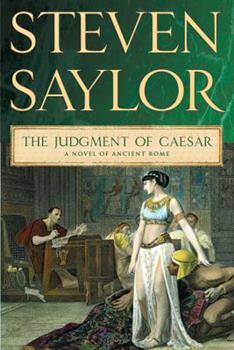 Gordianus the Finder and his ailing wife Bethesda travel to Egypt - Bethesda's homeland - seeking a cure for her enduring, mysterious illness. They arrive as the Civil War between Caesar and Pompey is reaching its conclusion on its shores. Captured by Pompey, but rescued by Ptolemy's men who kill Pompey for Caesar, Gordianus is caught in the middle of the struggle between Ptolemy and his sister Cleopatra, Caesar's seduction by Cleopatra, and the dying...

Published by Thriftbooks.com User , 14 years ago
This man writes in such a comfortable style, that it is a pleasure to curl up with one of his books and while away an afternoon. I enjoyed the short stories more in that he focused on a particular part of roman living in each story. The novels balance more on the detective skills of the protagonist. But his novels are just as entrancing to read.

Saylor Has Done it Again

Published by Thriftbooks.com User , 16 years ago
The Judgement of Caesar continues the saga of Gordianus the Finder in the same high style of the rest of the Sub-Rosa series. Our sleuth is present at the un-wrapping of Cleopatra and takes the back way to visit the tomb of Alexander. As usual, he unravels many a know along the way and then leaves us with... a cliff-hanger??? Make this one come out right, Steve. I strongly suspect that The Judgement of Caesar and the rest of the the sub-rosa series will be read with pleasure 200 years from now.

Published by Thriftbooks.com User , 16 years ago
This is the best fiction book I have read in the past year. (I read about 50 books a year- and would probably pick "Collapse" by Diamond as a slightly better book read in the past year but it is nonfiction). "The Judgement of Caesar" slightly edged out "A Plot Against America" which also deserves kudos. The only thing I would say is- read the previous books before this one. I read the first two and enjoyed them a lot, and ran across this in the library so picked it up. I wish I hadn't (because I wish I had read the intervening books first!). However, I could barely put the book down.. then I entered that state where I wanted to keep the reading experience alive so started trying to read it really slow. Anyway, he does a fantastic job of bringing Caesar, Pompey, Ptolemy and Cleopatra to life- he both uses their original (as historians recorded) dialog and gives them incredibly believable personas. Perhaps slightly anachronistic, but barely. Add to this the incredible personal journey of Gordianus and this book is simply incredible. His relationships with Bethesda and Meto are explored and deep. A little bit of philosophizing thrown in with the immersion in Rome like I have never found anywhere else (I like reading Byzantium history on the side so have a prediliction for the ancient times) and this is simply fantastic. Something about the characters in this book made them stand out as solid, real, and you worry about them. The murder mystery is incidental to the plot (of the protagonists growth) , but is very well done nonetheless. Most of the way into the book I wondered "where is the mystery?" and then I thought "who cares I don't want it anyway". Then when it came along it was executed meticulously. You won't be disappointed with this book

Published by Thriftbooks.com User , 17 years ago
When a storm blows his ship off course, Roman investigator Gordianus is captured by the one man who most hopes to see him dead--Pompey the Great. Before he can carry out his threats, however, Pompey himself is killed by the Egyptian king, Ptolemy and Gordianus makes his way to Alexandria just in time to see Julius Caesar taking control. Caesar intends to secure Egypt as a base, ensure that Pompey's allies cannot use it agaisnt him, and then move on but the conflict between Ptolemy and his sister/wife/rival, Cleopatra threatens Caesar's peace. Cleopatra and Ptolemy both use every persuasion possible to encourage Caesar to chose them as the singular ruler of Egypt. In the course of this persuasion, Gordianus's estranged son, Meto, is accused as an attempted assassin and Gordianus realizes that he will lose his son forever if he doesn't do his best detecting ever. Unfortunately, if Meto isn't the poisoner, either Ptolemy or Cleopatra probably is--and Caesar is unwilling to allow either of them to be accused. Author Steven Saylor spins a convincing and gripping tale of Egypt in the dying days of the Roman Republic. Egypt's wealth makes it a treasure that Rome must have, but its mysterious religions and its concepts of god-king make it anathema to republican Romans like Gordianus. Saylor deepens the mystery and the reader's emotional involvement in the story by making Gordianus a fascinating and complex character. His love for his wife (despite an affair), his torn feelings for Meto, and his wish for the republican virtues of a vanishing Rome engaged my sympathies and increased my investment in the story and in Gordianus finding a solution to what seemed an insolvable problem. Indeed, the actual Judgment of Caesar comes down to solving the unsolvable. Saylor's strong writing and fascinating insights into history add to the book's appeal. THE JUDGMENT OF CAESAR is a winner.

A Must-read for lovers of Caesar or Roman history

Published by Thriftbooks.com User , 17 years ago
I've read all Saylor's books since "Roman Blood" over a decade ago, and have watched him deepen in texture and subtlety in the process. His marvelous fictional detective, Gordianus the Finder, is a Roman private eye in Rome during the time of Julius Caesar and the late Republic. Saylor has always been (unlike many others in the "Roman gumshoe" novels, now so popular) meticulous in his research and takes a given historical set of facts, then plays with their possibilities without straying from history as we know it. However, of the history we do know, there is much that can be questioned, and no one is better at finding out the truth than Gordianus.I have noticed, particularly since his "Last Seen in Massilia," that Saylor seems to have lately gone beyond simply writing a good historical mystery, which may account for some reviewers' who don't like this book for precisely the reason I find it one of his best.Saylor no longer hangs his entire plot around a murder, but has branched out, as his fictional characters have developed, into a more mature and complex web. At the same time, the actual historical period he's entered is one of the most amazing periods in all world history - the Civil War brought on between Caesar and the Republicans, after Caesar crosses the Rubicon. Many long books ago, Gordianus' adopted son, Meto, became a staff aid to Caesar when he was just another ambitious general in the provinces. Now, of course, it's 48 BC and Caesar, having destroyed Pompey's armies, rules the Roman world. Personal events bring Gordianus and his wife, Bethesda, to Alexandria just at the time that Pompey has fled there after his defeat by Caesar at Pharsalus, seeking to grasp Egypt's riches to save his cause. Caesar follows hot on his heels, with much the same plan. Gordianus, Meto - even Bethesda - are caught in this web of shifting allegiance, lies, betrayal, high politics, and stunning world characters; thus this book becomes much more than just a simple murder mystery. Gordianus is strengthened in his character of the staunch Republican who prefers truth to diplomatic truths and integrity to self-aggrandizement - but you will see what it brings him in this new, raw, Roman world.I've studied much about Alexandria in Caesar's time, but I recall no book that made me 'see' its magnificent streets and temples, its tempestuous mobs and tortuous rulers, as clearly as Saylor does in "The Judgment of Caesar." Just as his plots are much richer than before, so the very title speaks to many facets of the plot - the most important being, how Caesar's judgments, large and small, right or wrong, are now capable of changing the Roman world. Whether adversaries succeed in twisting his judgment, is part of the fun of the story. The murder is integral to the story and I found it well written and well solved; but it's only one of the pleasures of this book.I've written at length on Caesar, Pompey, and Cleopatra in my own web site, but Saylor also finds a
Copyright © 2020 Thriftbooks.com Terms of Use | Privacy Policy | Do Not Sell My Personal Information | Accessibility Statement
ThriftBooks® and the ThriftBooks® logo are registered trademarks of Thrift Books Global, LLC