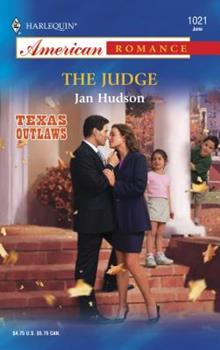 (Book #2 in the Texas Outlaws Series)

The Judge by Jan Hudson released on May 25, 2004 is available now for purchase.

Published by Thriftbooks.com User , 16 years ago
FRANK JAMES OUTLAW is a Judge. He lost his wife a couple of years ago and is not looking any emotional entanglements. He has a pair of twins to raise. Carrie Campbell is single, about 30 and has been around. She is looking for land to do oil exploration on for her Uncle Tuck. Her uncle has sent her to Naconiche, Texas where the Outlaw family live. [NAK-uh-KNEE-chee] She makes friends with Mary Beth, who is engaged to J.J. Outlaw, the sheriff. And finds an old schoolmate in Dr. Kelly Martin, who had moved to Naconiche about two years ago. They soon become involved in the goings on in Naconiche and Carrie finds it impossible to forget her first meeting with Frank, thinking he is someone else. In another coincidence, it seems that Frank has a paint mare that is descended from her uncle's stock. A Calico mare that she loved. Frank wants her to stay away from Clyde Burrows, who threatened the last oil man with his shotgun. They considered Clyde dangerous. Clyde was on Carrie's list of owners that she would have to approach. Did she know what she was doing? Well there we go again with the bed hoping and no commitement in sight. These hussies show up in most every book. They have such trashy attitudes. Well she lied to Frank, or so he says, and he is not happy with Carrie. But Carrie gets the job done - no strings attached. And takes off for Oklahoma and catches cold. A good read but these women's attitudes are a bit boring.
Copyright © 2020 Thriftbooks.com Terms of Use | Privacy Policy | Do Not Sell My Personal Information | Accessibility Statement
ThriftBooks® and the ThriftBooks® logo are registered trademarks of Thrift Books Global, LLC