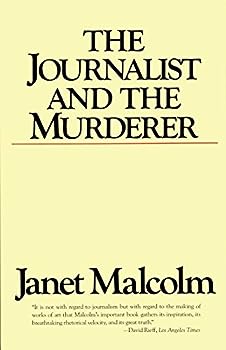 The Journalist and the Murderer

This description may be from another edition of this product. A seminal work and examination of the psychopathology of journalism. Using a strange and unprecedented lawsuit as her larger-than-life example -- the lawsuit of Jeffrey MacDonald, a convicted...

Should be required reading for journalist

Published by Peanut , 5 months ago
Fascinating story expertly told. Looking at the complex relationship of writers and subjects while simultaneously aware she is engaging in the same relationship that originally led to the “once in a lifetime” court case.

How far should they go?

Published by Thriftbooks.com User , 14 years ago
Joe McGinniss put himself on the map writing the classic 1969 book, THE SELLING OF A PRESIDENT. That book detailed how Richard Nixon was sold to the public like any other consumer product. It's worth reading if you can find a copy. The Nixon book was such a hit and McGinniss was so young he couldn't find material good enough to follow it up and his next few books were mediocre. Determined to find another worthy subject, he tackled the case of Dr. Jeffrey McDonald, a man accused of killing his wife and children. That story became the bestselling FATAL VISION and this book, THE JOURNALIST AND THE MURDERER, chronicles the techniques that McGinniss used to get close to McDonald, and how he pretended to support McDonald through the years of legal proceedings although he always thought him to be guilty and wanted a guilty verdict for a better book. McGinniss' technique led to unfettered access to legal files, evidence, but most importantly access to McDonald. They'd drink together, strategize together and were pals during the experience. The central question is how far can a journalist go to get the story? Although a jury found McDonald guilty of murder, a later jury found in favor of McDonald in his suit against McGuinniss because they felt that his techniques were so underhanded and self-serving that even a murderer deserved better. The book shows the divide between the win-at-any-cost media and the public that grows weary of the techniques used against people to create news. Does the public have the right to know enough that journalists can lie to subjects to bring the story to press? This short book makes you question a number of journalistic techniques and it doesn't hurt either that McDonald has strong supporters and could possibly be innocent of the murders, at least in the context of this book.

Looking at the murky world of journalistic ethics.

Published by Thriftbooks.com User , 18 years ago
In 1970, a respected army physician named Dr. Jeffrey MacDonald claimed that four strangers broke into his home in Fort Bragg, North Carolina, and killed his wife and two daughters. Although an army tribunal tried Dr. MacDonald and cleared him, years later the case was reopened. This time, MacDonald was convicted and sent to prison, where he still is today. Janet Malcolm does not reopen the MacDonald case in her book, "The Journalist and the Murderer." Rather, she examines the issues behind a libel suit that MacDonald brought in 1984 against his supposed friend, Joe McGinnis, author of "Fatal Vision." Joe McGinniss posed as an ally of Jeffrey MacDonald for years. McGinnis lived with MacDonald for a while and even joined his defense team. McGinniss sent MacDonald sympathetic letters in support of his cause. In these letters, he frequently expressed his belief in MacDonald's innocence. It was only after "Fatal Vision" was published that MacDonald discovered the truth. McGinniss did not believe in MacDonald's innocence; on the contrary, he portrays MacDonald as a psychopathic murderer. The author posed as a friend for the sole purpose of keeping MacDonald in the dark so that McGinniss would continue to have access to his subject. "Fatal Vision" became a huge bestseller and it eventually became a miniseries. Malcolm's book, written in 1990, takes on added significance in 2003, when the ethics of journalists are under fire as never before. Time and again, a small number of journalists have been accused of plagiarizing and fabricating stories. The public is beginning to recongnize that reporters are fallible people who suffer from the same pressures, ambitions, and even psychological disorders as other ordinary mortals. Malcolm's book is not merely a condemnation of McGinniss's behavior towards MacDonald. Her premise is that the journalist's relationship to his subject is, in its very essence, a perilous one. The gullible subject babbles away to his "sympathetic" listener, revealing more of himself than he realizes. When all is said and done, only the journalist and his editors have control over the final product. They are sometimes tempted to distort the facts to make the piece more interesting. Malcolm asserts that certain journalists are con men who prey on people's loneliness, credibility, and narcissism to get a good story. Journalists have their own agendas and the "truth," which is elusive at best, is not always their top priority. Malcolm's book is a warning not to believe everything that is printed in a newspaper or a magazine, since each story is only one version of reality.

Published by Thriftbooks.com User , 18 years ago
In The Journalist and the Murderer, Janet Malcolm examines the transactional relationship between a journalist and her subject, especially the dynamic of what happens during an interview. (Why do so many people repeatedly and voluntarily blabber stupidly to the media? Why is it so difficult to refuse a microphone?) And what moral obligation does a journalist have to her subject?Malcolm answers these questions (as much as she's able to) in the context of a murder trail that journalist Joe McGinniss wrote about, after being given unlimited access to accused murderer Jeffrey MacDonald and his defense team. McGinniss, originally sympathetic to MacDonald, comes to believe that he is guilty of the murder (the jury agreed), but does not reveal his change of heart to MacDonald, in order to maintain access to him. Once McGinniss's book, Fatal Vision, is published, MacDonald is horrified by the portrait presented to him and sues McGinniss for fraud.Malcolm raises issues that I, a constant reader of journalism, had never considered. Her book gave me insight into what a writer must do to get the story. She's made me a less naïve reader. Those long articles in The New Yorker will never seem the same.

Published by Thriftbooks.com User , 21 years ago
I read this book several years ago. I found it to be extremely intelligent and interesting. It is a book that clearly portrays the relationship between a journalist and a subject. Both sides are manipulative and selfish but only the journalist has the power in this relationship. What McGinnis did in Fatal Vision was grossly unfair regardless of Macdonald's guilt or innocence. I think that is why it made such a huge splash with other writers. In the age of new journalism, most writers will do and say anything for a good story.

Published by Thriftbooks.com User , 21 years ago
I am a journalism major, and did read this for a journalism class. Setting all that aside, I did find it to be a very interesting, and would recommend it to anyone who has ever had an interest in journalism or the interview process. Ms. Malcolm does take a neutral stance in the MacDonald's murder conviction, which is disconcerning given the gruesomeness of the crime and its role in the book. But that is really minor, because the work succeeds as a whole.
Copyright © 2020 Thriftbooks.com Terms of Use | Privacy Policy | Do Not Sell My Personal Information | Accessibility Statement
ThriftBooks® and the ThriftBooks® logo are registered trademarks of Thrift Books Global, LLC