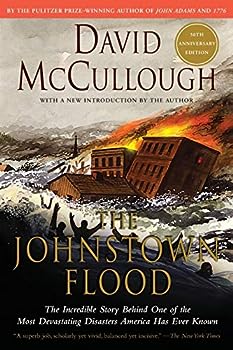 This description may be from another edition of this product. The stunning story of one of America's great disasters, a preventable tragedy of Gilded Age America, brilliantly told by master historian David McCullough. At the end of the nineteenth century,...

Published by Beagle , 16 days ago
Hard to find words to describe how wonderful this book is. It is an eye opener not only to this disaster but any major natural catastrophes. It gave me a better understanding of how slowly recovery starts, such as the telegraph was wiped out from the flood so there for communication did not exist. It spoke of the politics involved which made the whole thing worst. It is a great read which will assist your understand of major natural events.

Published by Thriftbooks.com User , 15 years ago
I've rated this five stars only because you cannot list six. This is the one and only account of the Flood that you need to read. Even though it is now old enough to be a classic, it is as timely as today's newspaper. The hubris of the robber barons contrasted with the human anguish is nowhere more poignantly told than in McCullough's meticulously researched account. (And yes, he is related to people connected with the story, as am I). If you want the story to come alive, then focus on the people...Especially Cyrus Elder, the Cambria Iron executive who was the only Club member whose immediate family members perished in the Flood. Representing both sides of the story, Cyrus is the center around which the disaster unfolds. Yes, it helps if you know the terrain--go out of your way, if you can, to see the National Flood Memorial and you will be awestruck by the sweep of the broken dam's size. Far off in the distance, across the long-dry lake bed, you will see the rooftops of the little Pennsylvania town of St Michaels, which grew up around the abandoned cottages of the illustrious members of the defunct Club. Many of the cottages are still there! Better yet, you can wander through the original Clubhouse--some of the wallpaper probably dates back to 1889, even now. In the main NFM building, be sure to look at the telegraph handset, the one by which the ignored warning from South Fork was sent down the wire to Johnstown and then relayed on to Robert Pitcairn in Pittsburgh. McCullough tells it best. Read the book; then go see for yourself. Pay attention to the South Fork Club members. If you find this review helpful you might want to read some of my other reviews, including those on subjects ranging from biography to architecture, as well as religion and fiction

The biggest news story since the murder of Abraham Lincoln

Published by Thriftbooks.com User , 16 years ago
At the time, (May 31, 1889) the Johnstown flood was the biggest news story in the nation since the murder of President Abraham Lincoln. A total of 2,209 residents perished when the South Fork Fishing & Hunting Club dam broke. To this end, author David McCullough documents the incredible story in meticulous (and objective) detail. In doing so...he also provides a heartbreaking account of what went wrong. The South Fork Fishing & Hunting Club was an elite organization of the super rich and powerful. Members included, Andrew Carnegie, Henry Clay Frick, Philander Knox and Robert Pitcairn. McCullough concludes that the club tampered drastically with the natural order of things and had done so badly. Moreover, the club ravaged much of the mountain country's protective timber, which caused dangerous flash runoff following mountain storms; they obstructed and diminished the capacity of the rivers; and they bungled the repair and maintenance of the dam. "Perhaps worst of all they had failed...out of indifference mostly...to comprehend the possible consequences of what they were doing, and partiularly what those consequences might be should nature happen to behave in anything but the normal fashion," which according to McCullough was exactly what was to be expected of nature. The New York Times concluded that the cause of the flood was an engineering crime...that the dam was of inferior construction. Other publications reported the nation simmered with deep seated resentment of the rich. On a positive note, the help and aid to Johnstown was the greatest ourpouring of charity that the nation had ever seen. Additionally, the doctors, nurses and sanitation crews did a "spectacular" job of preventing a typhoid epidemic. And finally the author does not fail to report the countless others who went beyond the call of duty to perform tremendous acts of bravery. Unfortunately, the club members were never held accountable and were disgustingly "stingy" with disaster funding. On that note, a poem by Isaac Reed accurately captured the moment in history; Many thousand human lives... Butchered husbands, slaughtered wives, Mangled daughters, bleeding sons, Hosts of martyred litte ones, (Worse than Herod's awful crime) Sent to heaven before their time; Lovers burnt and sweethearts drowned, Darlings lost but never found! All the horrors that hell could wish, Such was the price that was paid for...fish! Bert Ruiz

Published by Thriftbooks.com User , 17 years ago
I was born in Johnstown and lived in Western PA until I graduated from college. I then moved to Washington, DC. About 4 years later, a coworked told me that he always wanted to visit Johnstown. At the time I couldn't understand why, so I asked. He went on to explain how he was reading "The Johnstown Flood" by David McCullough in Iowa in 1977 when he heard a radio announcement about the 1977 Johnstown Flood. I lived through the 1977 flood, and knew about the 1939 Johnstown Flood that my father lived through, but I knew little about the 1889 Flood. I bought this book the day after this friend recommended it and read it straight through cover to cover - I couldn't put it down. That weekend, I drove back to Johnstown and visited the Flood Memorial and the Flood Museum. I couldn't hold back the tears at these sites.This book completely changed my opinion of the Johnstown area and its history. I can't believe how many natives of Johnstown have never read this book. I have recommended this book to many people and not one has ever told me he or she didn't sink themselves into the book and become part of the story.I now work in Johnstown again. Every workday I drive by the stone bridge that was described so prominently in the book. In my mind I can picture the victims and the debris piled up against the structure. Sometimes I can even hear the water, the flames, and the cries for help. This book is that well written!If you're from Johnstown and you haven't read this book . . . Shame on you! If you're not from Johnstown, still read this book. Then . . . come to Johnstown and see for yourself what David McCullough brought to life through his writing!This is definitely a book you'll never forget.Don't stop here. Read David McCullough's other books. And, if you get a chance to hear him speak, don't pass it up. He spoke at my commencement 13 years ago and I recently heard him speak again. He's a facinating man with a gift for making readers (and listeners) travel back through time to relive the past.

Published by Thriftbooks.com User , 20 years ago
After recently reading "In Sunlight, In a Beautiful Garden," a fictionalized account of the events leading up to the Johnstown flood, I decided to learn more about the flood. Not only did the novelist list McCullough's book as a source, but it was recommended to me by a friend who reads a lot of American history. This author does an outstanding job in writing the history of the worst flood in a non-coastal area of the U.S.--this book is a real page-turner!McCullough relates the history of the South Fork property on which the dam and lake were located, including the purchase of this property by rich men from Pittsburgh, among them Carnegie, Frick, Mellon, and Horne. They formed the South Fork Fishing and Hunting Club, a mountain resort, and built a clubhouse for use by members. Sixteen members also built large "cottages" around the 350-acre lake that had been formed by the earthen dam which was first built between 1840 and 1850. When these men bought the property in 1879, the dam had been totally neglected so "repairs" were made. Unfortunately, no engineer had anything to do with these repairs, which consisted mostly of throwing junk, branches, rocks, and hay against the dam. During this time, the outlet pipes at the bottom of the dam were removed and sold as scrap. Other ingredients in this recipe for disaster were the pipes that were put in near the dam to prevent fish from leaving the lake. These would also, it was found later, allow debris to build up and cause water to spill over the dam more easily.The inevitable occurred in 1889, on Memorial Day, when a huge storm caused the lake to rise above the dam. With no outlet pipes to lower the level of the water, the water poured over the top, at the center. The dam soon gave way, allowing the contents of the huge lake to rush 15 miles down the mountain, destroying everything in its path, including the town of Johnstown.When McCullough describes this wall of water descending the mountain and the destruction that occurred, the picture he painted was beyond belief. The torrent of water brought with it livestock, houses, trains, tracks, machinery, barbed wire and everything else that was in its path.In the face of such complete chaos and horror, level heads prevailed. The day after the flood, townspeople held a meeting at which it was decided that a "dictator" was needed. Arthur Moxham was subsequently chosen and he immediately set up several committees to take care of removing dead animals and wreckage, setting up morgues and temporary hospitals, deputizing a police force (which cut out tin stars from cans found in the debris), handling finances, and obtaining supplies.At 4 PM this same day (Saturday), emergency supplies, 80 volunteers, and 30 police left Pittsburgh on a 20-car train after wagons had been sent out throughout the city to collect supplies for Johnstown. The next day, burials started. One out of three bodies was never identified--over 600 unknowns. During this time, more trains arriv

Published by Thriftbooks.com User , 21 years ago
Even though I lived in Southwestern PA for most of my life, I knew very little about the Johnstown flood until my sister made a comment once about the Johnstown Flood Museum, and one day this book just jumped out at me at the library. I found it difficult to put down. Some may think it "drags" in parts, but this was part of the tapestry woven to give realism to the actual people caught up in the disaster. I had heard of vague references to this event, but until I read this book I had no idea of the full scale of what happened, and the unbelievable circumstances which led up to it. Even more appalling was that folks who belonged to the "elite" club, whose selfishness and greed gave rise to the shoddily built dam, (such as Carnegie, Mellon, and the like) gave very little money to the relief effort, and no one from South Fork would acknowledge any responsibility for the dreadful event. Through this book, McCullough puts personality to the names and faces of the victims, and the full terror of the actual flood wave coming toward the town reads better than any suspense novel, as it is all true. I urge anyone who ever finds themselves in the Johnstown area to check out the actual Flood Museum, it is a memorable experience.
Copyright © 2020 Thriftbooks.com Terms of Use | Privacy Policy | Do Not Sell My Personal Information | Accessibility Statement
ThriftBooks® and the ThriftBooks® logo are registered trademarks of Thrift Books Global, LLC