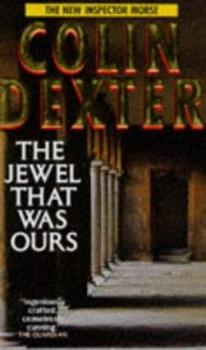 The Jewel That Was Ours

(Book #9 in the Inspector Morse Series)

This description may be from another edition of this product. "Superbly clue-laden...A complex and satisfying puzzle." THE BOSTON SUNDAY GLOBE The case seems so simple, Inspector Morse deemed it beneath his notice. A wealthy, elderly American tourist has a heart...

Inspector Morse to the Rescue

Published by Thriftbooks.com User , 13 years ago
. In this traditional British mystery a group of elderly American tourists are on a bus tour in Oxford. It turns out that the travelers have more than their share of secrets. When an accidental death and a murder occur, Inspector Morse suspects that events in the pasts of some of these tourists and their guides are playing a part in present events. (We don't learn Morse's first name until the final book in this fine series.) Dexter's books have a sly, malicious sense of humor and much is said in a tongue in cheek fashion. Morse is a lot of fun for the reader. He's not a happy man, but he is a bright bachelor able to bounce back from adversity as long as he has his booze, his crossword puzzles, his classical music, and an infrequent roll in the hay. He is not willing to take any blame for swallowing all those red herrings put out for him and the reader. The final unraveling of the plot is very complicated, defies common sense and is more ingenious than credible and leaves you wondering if you haven't been taken for a bus ride yourself. As in the classic British mystery this book even has all the suspects gathered together in a meeting with the police inspector ticking off the facts of the case and pointing to the murderer. Readers will learn the title has two meanings. Inspector Morse is a brilliant detective whose bursts of insight sometimes send his investigations off in the wrong direction and sometimes lead to the arrests of innocents. Exculpatory evidence often turns up to prove that he's been too hasty. For these errors he is unapologetic and good at ignoring his mistakes. Sergeant Lewis in this Colin Dexter outing fawns over his boss a great deal and is all to ready to overlook his superior's miscues. The book provides an interesting overview of Oxford and some of its oddities. With this mystery in hand, just hop aboard the bus, have fun, and go along for the ride. You'll have fun as long as you don't object to a supposedly logical man's logic going off track at times.

There's all kinds of death in this book, but only one murder

Published by Thriftbooks.com User , 16 years ago
In this book we see a death by natural causes, a suicide, a death by a road accident, and one death by murder. Morse and his wonderful Lewis are left to solve the puzzle which also includes a theft of a very valuable piece of jewellery. I can't stress enough how wonderful this series is! Dexter is a very gifted writer, and the puzzles that he sets are masterpieces. He is a master storyteller who sets a perfect pace and he crafts wonderful characters. I really enjoy seeing these done on film with John Thaw as Morse, but reading the books is really the way to really appreciate the intricacies of each of these books. I'm only sorry that I have only four left to read until the end of the series.

Morse at his best.

Published by Thriftbooks.com User , 20 years ago
If you like to be kept guessing this is the novel for you. It is also fun to read about the interaction between Morse and Lewis. These two deserve each other.

A Jewel of A Mystery !

Published by Thriftbooks.com User , 23 years ago
Inspector Morse occupies the bar of the Randolph Hotel while he investigates the titillating Shelia Williams and the odd disappearance of a priceless jewel. The jewels owner's heart attack leads to complications, complicity, murder, and an enormously entertaining run through a list of American tourist suspects. A superb plot, well written, well executed. An excellent read.
Copyright © 2020 Thriftbooks.com Terms of Use | Privacy Policy | Do Not Sell My Personal Information | Accessibility Statement
ThriftBooks® and the ThriftBooks® logo are registered trademarks of Thrift Books Global, LLC