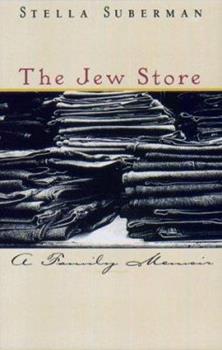 For a real bargain, while you're making a living, you should make also a life.--Aaron Bronson. In 1920, in small town America, the ubiquitous dry goods store--suits and coats, shoes and hats, work clothes and school clothes, yard goods and notions--was usually owned by Jews and often referred to as "the Jew store." That's how Stella Suberman's father's store, Bronson's Low-Priced Store, in Concordia, Tennessee, was known locally. The Bronsons were...

Published by Barb Boyer , 2 years ago
i ordered a hard copy of this book and received a soft copy.

Published by Thriftbooks.com User , 18 years ago
I read "The Jew Store" after seeing author Stella Suberman on Booktv. I was impressed with her, as she is young looking and quick thinking into her ninth decade.   Her story relates an unusual childhood, growing up in a small Tennessee town in the 20s and 30s where her immigrant parents ran a dry-goods business that catered to the lower income residents. They were the only Jewish residents, occupying a unique niche in the life of the area. Her sunny-natured, optimistic father flourished there, becoming southern in speech and outlook. The adjustment was harder for her sensitive, traditional mother. For Stella and her older sister and brother, there was no question of adjustment, as life in Tennessee was the only life they knew, and they were generally accepted and able to take root. Suberman is a wonderful writer, as one might expect for a "retired editor" of many years experience. Her style is vividly descriptive, with a perfect balance of the characters' inward and outward lives. "The Jew Store" is a joy to read. Suberman's book deserves the highest recommendation and will appeal to readers of all ages.

Insightful as well as enjoyable

Published by Thriftbooks.com User , 20 years ago
The life of the Bronson's in a typical 1920's midsouth rural town is not so different than what many baby boomers experienced as Gentiles in middle America in the 1950's. As I read I could hear in my mind's eye the rhetoric of fear, disapproval and sometimes hate that the good Christians of our town reflected in their covert and even overt behaviors regarding Jews, Blacks, Asians and yes, Catholics. It is not to different than what we hear Southern Baptist Ministers saying about Muslims after 9/11. Suberman's character development of the towns people with which he endured is classically detailed. She brought Ms. Brookie to life for me. I was immediately able to identify the Ms. Brookie in our town. Besides great characters the book taught me a great deal about the phenomenom of a [Jewish] Store. My family routinely shopped in them because they had what farm families needed at the price they could afford. I just didn't know that is what they were. Although most have not survived this midwest rural city of 160,000 folks still have a few and I still shop in them because they still have what I want at the best price. towns. Thank you Ms. Superman for a good read, some nostalgia and a new awareness of the ignorance of many who sit in our town's church pews every Sunday.

Published by Thriftbooks.com User , 21 years ago
"For a real bargain, while you're making a living, you should also make a life." That was Aaron Bronson's motto. Well, Russian Jewish immigrant Bronson did both, "in spades," as he would say. His daughter, Stella Suberman, has now written a book, and she's done it "in spades." This warm memoir of her family's experiences as the first Jews to live in Concordia, Tennessee, is vibrant with wit and cogent with commentary about 1920s life in a small Southern town. Rather than a pejorative title, Ms. Suberman says "the Jew store" is what people really called such shops, businesses owned by Jews who catered to farmhands, share croppers, and factory hands, offering them inexpensive clothes, piece goods, and linens. "They didn't know about political correctness in those days," she said, "that is just what it was called." Seeing opportunity in the South, Aaron Bronson, his wife, Reba, and their two children, Joey and Miriam (Stella was not yet born) set out from New York City to open a dry goods store. Upon arriving in Concordia, population 5,381, the family was taken in by voluble, independent Miss Brookie. Reba, who came with a mood that was "like a thing on her chest," was ill-at-ease, fearing the Ku Klux Klan, and people who believed Jews had horns on their heads. Later, she faced what she considered to be an even greater terror: Joey might not have a bar mitzvah and Miriam might be in love with a Gentile. On the other hand, Aaron took to the town immediately and opened "Bronson's Low-Priced Store," so identified by gilt lettering on the windows. His elation at having his own business knew no bounds; Reba described him as "Flying with the birdies." Aaron's shop flourished, as did he, becoming the first to hire a black as a salesperson. In years to come, he would make invaluable contributions to his Depression wracked community. Detente preceded affection as the townsfolk overcame their initial skepticism of Jewish people and grew to view the Bronson family as neighbors and friends. Miss Brookie gave Miriam piano lessons and attempted to enlist Reba in a battle to do away with child labor in the local shoe factory. Nonetheless, In 1933 Reba held sway and, although Aaron thought of Concordia as home, he agreed to take their three children and return to New York City, where he would open a garage and each child would eventually marry within the Jewish faith. Stella Suberman has turned a poignant family remembrance into a rich, sometimes funny, always touching story. In addition, she has shed light on a little known facet of Jewish/American history.

Published by Thriftbooks.com User , 23 years ago
This jewel of a book richly deserves five stars. The author's depiction of a Jewish family living in a small town in Tennessee in the 1920s is beautifully written. Especially impressive is the way the author wrote about anti-semitism without exploiting the issue for dramatic effect. (Compare this memoir, set in the 1920s, with moronic modern flicks like "School Ties" in which students at a boarding school in the 1950s shout at a Jewish student, "We hate you because you're Jewish." Give me a break.)Just as the author's family's Jewishness is dealt with subtly, so are the townspeople drawn: all of them seem genuine, not stereotyped. So restrained is the author, yet so talented, that a low-key but powerful scene toward the end of the book sneaked up on me: I found that I had tears running down my face as I read. I miss the townspeople and the author's family. I wish I could go back in time and drive to that town and find all of them still there.This memoir is far superior to the overrated Angela's Ashes; The Jew Store is the book that should have won the Pulitzer Prize.

Published by Thriftbooks.com User , 23 years ago
Until this book I did not know much of my family history.My mother always spoke fondly of the town and although the only Jewish family in Union City never felt unwelcome. She felt proud.She is now 85 but five or six years ago on a trip from N.Y. to Ca. visited Union City. I think she would agree with the comments of reviewer Joseph Hunter Harpole Sr. and was probably the Jewish teenager who attended those church services.She still attends a service now and then although it is now hard for her to get around.She is proud of her Tennessee heritage and I am proud of my Aunt Stella for shining a light on the period, our family, and all the God fearing, good thinking people in Union City, Tennessee.
Trustpilot
Copyright © 2022 Thriftbooks.com Terms of Use | Privacy Policy | Do Not Sell or Share My Personal Information | Accessibility Statement
ThriftBooks® and the ThriftBooks® logo are registered trademarks of Thrift Books Global, LLC