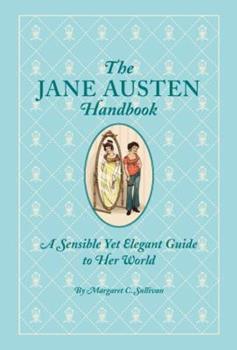 The Jane Austen Handbook: A Sensible Yet Elegant Guide to Her World

Illustrated throughout, this book not only provides step-by-step instructions for navigating the travails of Recency manners, it also acts as a companion to present-day readers and filmgoers, explaining the ins and outs of the class system, currency, dress, and nuances of graceful living.

6 ratings
Write a review
Published by Thriftbooks.com User , 3 years ago
I love this little book! Illuminating! Fun to read over and over in little chunks. Great book to have in my bag for stolen moments. Great companion to the authors writings.

Great fun whether or not you've read Jane Austen

Published by Thriftbooks.com User , 13 years ago
I'm ashamed to admit I've never read any Jane Austen but I've seen all the movies and PBS series of her novels and was looking for additional commentary. If you are intrigued with the manners and mores of this time and want a little more information in an accessible format, you'll like this handbook. This guide is probably not for those seeking in-depth historical analysis but the material is well-organized and efficient in its presentation of the world of Jane Austen. Even my eleven-year old daughter is intrigued with this book, especially after seeing the movie, "Pride and Prejudice." Overall, an entertaining companion book with attractive illustrations.

What would Elizabeth Bennet do?

Published by Thriftbooks.com User , 13 years ago
What a charming little volume! The cover illustration says it all. This is for the modern woman who retains a Regency era aesthetic and sensibility, who ofttimes wonders: Where have all the manners gone? From email correspondence that starts bluntly with one's name and no "dear" to shop cashiers who expect the customer to be person that says "thank you," the 21st Century is devoid of what used to be called common courtesy, and Jane Austen reminds us of a more genteel era. True, there were class and gender inequalities, but that's not what we modern readers yearn for, nor are we just indulging in highbrow bodice rippers or retrogressive fantasies of subordination. Some reviewers have snobbishly complained that The Jane Austen Handbook is just for those who came to appreciate Jane Austen after seeing "Colin Firth in a wet shirt" in the BBC production of Pride & Prejudice, but to that I say, the accusation is, one, off base and two, out of line. I, for one, studied Austen in grad school before that movie ever came out and I love it and this book. Secondly, even if it is true for some readers, so what? What sort of superiority are these detractors trying to claim -- "I read Jane first so I'm better than you"? That's an indication of a coarse and simpering immaturity that Miss Austen herself would not countenance and would indeed be inclined to masterfully caricature. The Jane Austen Handbook is a combination handbook or primer and compact compendium of Regency life. It is for those of us who live and work and love and dress in the modern world, but who nonetheless like to display civility, sometimes laced with irony, in our speech and actions, to fold our letters property and to drink our tea from china cups, even as we work for our own "10,000 pounds a year" (Mr. Darcy's income, worth between one-half and six million in today's currency, as the section on Modern Money Equivalents on page 27 explains). Indeed, as the detractors point out, the information in this book can be obtained from numerous other sources, but why should anyone have to apologize for wanting it all in one attractive and amusing place? Margaret C. Sullivan's writing style reminds me of that of Judith Martin, a/k/a Miss Manners, whose works I also recommend to the modern Jane Austen acolyte, particularly her wonderful first novel, Gilbert.

Published by Thriftbooks.com User , 14 years ago
Jane Austen aficionados can be divided into two groups: those who found Jane before Colin Firth came out of that pond in his wet linen shirt, and those who found her afterwards. Margaret Sullivan's witty, informative, and instructive little volume is the perfect companion for the members of the post-Wet Darcy fandom, although most Janeites should find plenty here to enjoy. The ever-growing numbers of readers who are discovering the pleasure of reading the novels after having fallen in love with the popular movies and miniseries will find many of their questions about Jane's world answered in a humorous way which does not condescend. What is entailment? Why was the toad-eating Rev. Collins considered a good catch for Lizzie? Why did Catherine and Henry have to maintain a clandestine correspondence when everyone knew that they had formed an attachment? Why is a morning call sometimes paid in the afternoon? The list goes on. The illustrations are charming and period perfect. None of this nonsense you see in the popular press associating Jane Austen's world with corsets and hoop skirts and bustles and other such Victoriana. This book will definitely enhance a new fan's enjoyment and appreciation of the novels as they delve into them, and provided this pre-Wet Darcy fan with the perfect little volume to peruse in those times of extreme deshabille when a few minutes of light reading is required, but no more. While it would never be mistaken for a doctoral thesis, and is clearly not masquerading as such, I think even most longtime fans and readers will find a few nuggets of information that they did not know. The author's broad knowledge of her subject matter shines through the froth. Now, if Ms. Sullivan would only share with us her views on the various movies and adaptations of Jane's work...perhaps "A Sensible, Yet Snark-filled Guide to the World of Jane on Film", my happiness would be complete.

Published by Thriftbooks.com User , 14 years ago
I own and have read Ross' A Jane Austen Companion, Jane Austen for Dummies, and The Jane Austen Handbook: A Sensible Yet Elegant Guide to Her World. They are all very different in tone and in the information they present. The Jane Austen Handbook is fun and informative, much as is a Jane Austen novel - full of lessons for the wise and discerning, set forth in a very entertaining style. Since that was the goal of this particular book, it has succeeded. There are other books, such as Josephine Ross's A Jane Austen Companion - not as entertaining but informative, and Jane Austen for Dummies, which concentrates on introducing the reader to the art and importance of Austen, in addition to many other topics, in a very amusing style. To compare them with each other does those reading reviews a disservice. Margaret Sullivan's book is a perfect introduction for the reader new to Austen and her time. That said, those very familiar with Austen will be delightfully entertained with the many inside jokes in her book, such as listing "offer to mend a gentleman's pen" under How to Indicate Interest in a Gentleman Without Seeming Forward. (If this doesn't make you smile, seek membership in the Somber Literary Society.) Educated Janeites will enjoy the many obvious Austen references, including "a quick succession of busy nothings." Newly declared Jane Austen fans will learn information that will add to their enjoyment of reading her novels. For the movie fans, there is a list of Jane Austen adaptations and related movies. Something for everyone! I cannot imagine how someone would not enjoy this book. Well, perhaps Mrs. Norris would not.

A Must Have Handbook for Jane Austen Readers

Published by Thriftbooks.com User , 14 years ago
The Jane Austen Handbook is a fabulous resource for both the experienced Janeite and the novice reader. My only question is, what took so long for such a book to be written? Packed with far more historical detail than The Friendly Jane Austen and more relevant Regency information than What Jane Austen Ate and Charles Dickens Knew the author keeps a light touch while providing essential information about everyday Regency life. The sections in this book (i.e. How to Become an Accomplished Lady, How to Run a Great House, How to Indicate Interest in a Gentleman Without Seeming Forward, How to Throw a Dinner Party, How to Choose and Buy Clothing...) are not so much "How To" spots but delightfully detailed descriptions on what life might have been like for a Regency Gentlewoman such as Elizabeth Bennet or Jane Austen, herself. There are plenty of things for the modern reader to try, but far from coming away with only a new set of social skills, the reader will find a much greater understanding of the era Jane Austen was writing in and consequently a greater ability to enjoy Jane Austen, as well as other Regency writers. The first of it's kind to focus on what life was really like in the Regency (not the Victorian era, as so many "19th Century Histories" do)this book is a great resource for authors of Regency Era and Jane Austen styled fiction, as well. A first from author Margaret Sullivan, I certainly hope it won't be the last! The illustrations by Kathryn Rathke are priceless and the appendix is chock full of other Austen related information including a brief biography, summaries of Austen's works as well as film and television adaptations, and a comprehensive list of useful online resources. I give it five enthusiastic stars!
Copyright © 2022 Thriftbooks.com Terms of Use | Privacy Policy | Do Not Sell My Personal Information | Accessibility Statement
ThriftBooks® and the ThriftBooks® logo are registered trademarks of Thrift Books Global, LLC